Causes of violent extremism and terrorist recruitment in Africa 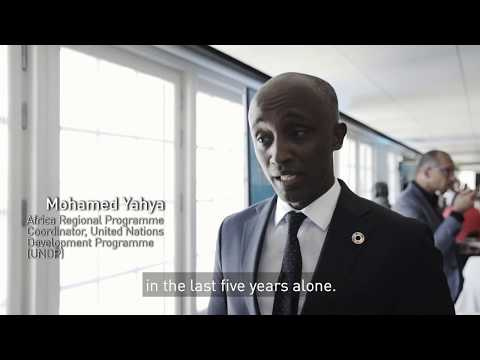 WATCH: What are the causes of violent extremism in Africa? UNDP Programme Coordinator, Mohammed Yahya, argues that young people are marginalized from the political processes, and that climate pressures tend to be one of the factors in joining terrorist organizations.

The SDGs can only be achieved when these root causes are tackled.

"The impact of violent extremism on the African continent in the last five years has been really devastating both economically and, more importantly, lives lost and people displaced. Africa alone had 33.000 deaths in the last five years alone. It is humongous. But this is obviously not always reported, partly because it happens in peripheral areas and it impacts many poor people.

We have our teams that work on climate involved in the program, we have our teams that are working on inequality and inclusive growth so that nobody is left behind, and we also have people who have a background in governance and mediation and peacebuilding. So it forces interdisciplinary approach to a problem that is becoming really stunting development progress in Africa.

Africa has grown since the turn of the century at an average of 5% a year, which has been very good, but that growth has not been equally shared. The continent is still the number one continent in terms of inequality between the ‘haves’ and the ‘have-nots’. It is also a continent that has really culturally, economically and politically marginalized young people. So it is also not a surprise that the average age of people who have been recruited, especially in the Lake Chad area, is between 17 and 22. So they are targeting the exact group of people who do not have a stake in the political realm and do not have a stake in the economic realm. This is extremely important in terms of the linkages and in understanding how violent extremism happens. If we don’t address it from this angle, you cannot talk about development or achievement of the SDGs.

To sustain peace in the Lake Chad region and all over Africa and to deny space for recruitment to terrorism in the continent, you really have to empower and give young people opportunities. You have to deal with the issues that are displacing them and affecting their livelihoods such as climate pressures and you really have to ensure that they are represented in the political processes. One of the most interesting facts is that the medium age of an African is between 19 and 20, but an average age of an African leader is 66. The generational gap is also some of the things that have to be dealt with, which means give an opportunity for young people in leadership and giving them access at that level also is important."