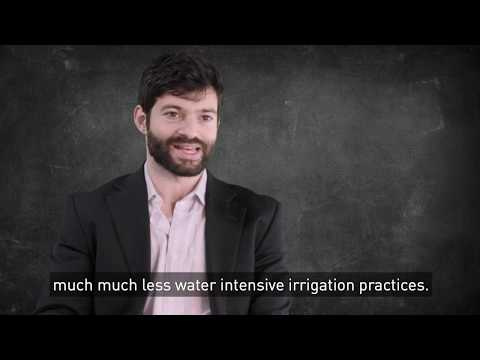 WATCH: In Iraq, climate shocks are deeply intertwined with the country's crumbling security. As a journalist, Peter Schwartzstein could observe how the lack of livelihood options in Iraq's barren, drought-stricken rural landscapes has pushed young men to join terrorist organizations as a means of survival.

For him, the sound management of its increasingly scarce waters and more efficient agricultural practices that can cope with a changing climate cannot come soon enough for Iraq.

"It's pretty tricky to fully articulate the sheer array of different ways in which climate change is creating security-related risks for Iraq, but perhaps the most pressing, the most complicated is that climate risks are contributing to the creation of this cohort of jobless, angry, resentful, often resentful young men in rural parts of the country.

In many instances, drought, desertification and extreme temperature swings have just been the straw that has broken the camel's back. There's that final little thing that has pushed some of them over the edge. On a broader level, climate security risks – again, particularly drought – are just adding a whole new additional level of governance challenges to a country that can't really afford any additional complications.

You had an estimated 118.000 hospitalizations in southern Iraq at one point last summer due to contamination of the water supply. It's added a whole new set of additional burden, of economic burden for Iraqis across the country. Many of them are already surviving at the economic breadline and now they're having to buy in water tanker, quantities of water just for laundry, or washing, or really quite basics of domestic necessities. And then of course it's also posing additional challenges for Iraq's food security.

What to do about it? I'm slightly wary about sort of beginning by saying that one needs increased awareness, because at a time when the problems are so massive, to suggest that what ought to be sort of going around and boosting awareness seems kind of untimely. But the point remains that a lot of pretty senior people, particularly within the sort of most important sectors – the Military, the Ministry of Interior – have yet to fully wake up to the dangers of a crumbling environment, to the dangers of severe drought over an extended period.

And perhaps even more than that, like an immediate priority: there's got to be efforts to reduce the amount of pollution that's making its way into Iraq's rivers, because what relatively meager water there is, is frequently of no use to man or beast. You can’t even use it.

It's going to require a seismic shift in thinking, in action and above all else, in just mobilizing kind of every bit of resource, whether it be financial or talent, immediately to embrace the problem."

WATCH: Climate change plays an exacerbating role in the armed conflict in Iraq. In this video, Iraqi experts explain how climate change impacts such as...