The lived effects of climate change are becoming increasingly drastic in Jordan. Extreme weather events such as flash floods, associated landslides and recurring droughts have proliferated over the last decade. The Middle Eastern nation is already one of the most water-stressed nations globally, and climate-induced record low levels of rainfall, heightened evaporation and increases in temperature will further drive desertification, reduce water supply and exacerbate water scarcity in the future. This not only poses a substantial risk to the wellbeing and livelihood of the country’s population, but also adds additional pressure to existing tensions, for example around transboundary water sharing, particularly with Syria and Israel. Confronted with such direct threats to people’s livelihoods, trustworthy state-of-the-art climate data is integral to enable stakeholders to conduct much needed long-term planning and adaptation measures that promote resilience.

Climate Risk Profile: Jordan contributes to meeting this need. The climate models employed project that until 2080, under a medium to high emissions scenario, air temperatures will rise by up to 4.5°C, compared to pre-industrial levels. Northwestern and central Jordan will experience a particularly significant increase of very hot days. The projected temperature changes will lead to increased exposure to heatwaves and pose a risk to the population’s ability to work and live. The climate models also include lower certainty projections for parameters including crop yields, GDP exposure to flooding and heatwaves, ecosystems impacts and water availability. Under the medium to high emissions scenario, annual per capita water availability will decline by around 75 % compared to the year 2000, when water shortages were already alarming. 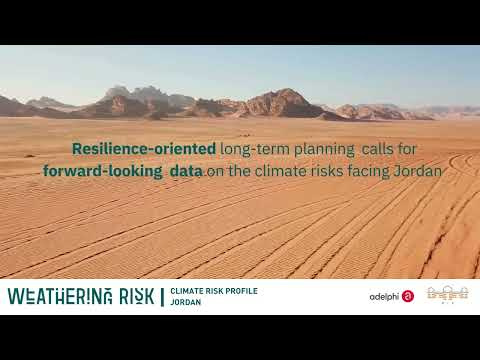 These projected climate impacts will increase fragility risks associated with displacement and transboundary water sharing, and are likely to further undermine existing economic volatility, as well as local and regional stability. Reliable data can enhance capacity for action and improve operational responses towards a more climate-resilient and peaceful future. When analysed alongside localised human security data, these projections can be used to inform comprehensive climate-security risk assessments to support strategic and operational risk-informed decision making and identify entry points for action.

Such data can improve transboundary water cooperation, and inform peace agreements on the ground. The recent water-energy agreement between Jordan, the UAE and Israel signed at COP27 highlights the pressing need to address water and energy security  to promote stability in the region.

The climate projections presented in the Climate Risk Profile: Jordan are the product of a collaboration between Weathering Risk and the AGRICA project from the Potsdam Institute for Climate Impact Research (PIK). They draw on the data and modelling work done by PIK’s ISIMIP project.

The impacts of climate change are already adversely shaping security in the Levant region, comprising Israel, Jordan, Lebanon, Palestine and Syria. This...

What do Iraq, Syria, and Ukraine have in common?

Natural Resource Scarcity is a Threat to Our Security (Part 1)