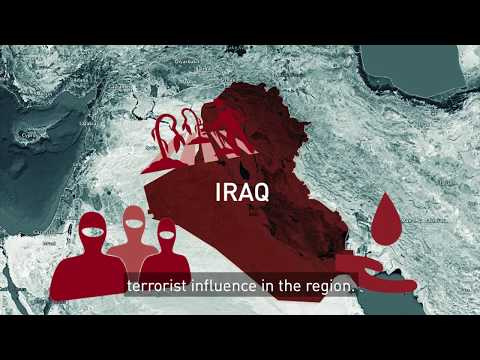 WATCH: Climate change plays an exacerbating role in the armed conflict in Iraq. In this video, Iraqi experts explain how climate change impacts such as increased droughts and water scarcity spur tensions within the country.

A rapidly growing population increases water demand even more, and dams on the main rivers Euphrates and Tigris built by neighboring countries may further reduce water availability in the future. These developments pose serious challenges for the Iraqi government and highlight the need to focus on the nexus between climate change and conflict.

While today the immediate threat of ISIL may seem overcome, the country faces the complex challenge of building sustainable peace and reconstructing a future for the Iraqi people. Water scarcity is still an obstacle in that process. What can be done to remedy the security risks in face of climate change?

Voice Over
“Iraq is highly vulnerable to climate change – with impacts ranging from severe drought to heavy storms. Climate change affects already fragile communities that are struggling to recover from conflict. Water scarcity is considered one of the reasons for the expansion of terrorist influence in the region. It aggravates problems of poverty and youth unemployment, and plays into the hands of Al Qaeda and ISIS. Scarce water continues to be one of the greatest obstacles to peace.”

Aala Ali, Iraqi Women and Peace Activist
“Actually the climate change issue started in Iraq intensively in 2006 and 2007, when drought and global warming affected a lot especially the West part of Iraq, mainly in Neineveh and Al Anbar. Many families, thousands of families became jobless after the drought; no agriculture, their animals died. Thousands of youth became jobless, and this was the critical point that those terrorist groups – including Al-Qaida and, later on, ISIS – recruited those youth really easily, because they had no other options.”

Voice Over
“Today, the risk from Islamic insurgency seems to have declined, but the falling water levels in reservoirs, lakes and rivers remain a problem – especially in the face of Iraq’s rapidly growing population.”

Azzam Alwash, Founder of Nature Iraq
“We have just finished with ISIL. However, this is not the end of trouble. Iraq and the region face a very desperate situation. With climate change, it is predicted that water is going to decrease; the number of people is increasing, which means that, over the horizon, there are going to be tensions about the water and water distribution.”

Voice Over
“New conflicts loom over the region: The dams that are being built by neighbouring countries to harvest the power of Tigris and Euphrates decrease the water flowing into Iraq. At the same time, climate change impacts become more acute.”

Hassan Al-Janabi, Iraqi Minister of Water and Resources
“This combination of human control and unsustainable ways with severe consequences of climate change makes life very difficult. Added to that, the terrorist attacks, the series of wars we have suffered in our country, you can imagine how tragic the situation is. That is why we need really global attention to this issue for the stability in the region.”

Voice Over
“Countries need to work together to share the little water wisely. Solutions would require dialogue and water sharing agreements with Turkey, Syria and Iran and better water governance. That includes investment in rebuilding water infrastructure and efforts to promote fair access to potable water and basic sanitation. Any stabilisation and peacebuilding effort in Iraq must strengthen water management, to prevent future conflicts.”