In recent years, conflict between herders and farmers for access to increasingly scarce natural resources in Africa’s Sudano-Sahel has escalated. While the problems fueling these tensions are both hyper-local and transnational in nature, one important piece of the puzzle has been overlooked. The real “elephant in the room” is who owns the livestock.

Recent incidents paint a sobering picture of herder-farmer conflict in this region. A deadly attack in central Mali on March 23 resulted in the death of over 130 ethnic Fulani herders at the hands of a rival ethnic group, the Dogon, who are primarily farmers/hunters. In Nigeria, pastoral conflict was estimated to be six times deadlier than violence at the hands of the terrorist organization Boko Haram in 2018. In the Central African Republic (CAR), over 70 percent of the country is controlled by armed groups, including identity-driven armed groups that vow to protect pastoralists but have been implicated in acts of violence against civilians.

Conflict between herders and farmers in Africa’s Sudano-Sahel (see Map 1) is not new, but key changes to the composition and ownership of livestock herds are exacerbating once manageable tensions. Urban elites, including military and civil administration officials in cities such as N’Djamena (Chad), Khartoum (Sudan), Bangui (CAR), and Abuja (Nigeria) are concentrating their wealth in larger herds (primarily cattle).

Transhumance, or the practice of moving livestock seasonally to access available pastures and water, is being increasingly militarized.  This “neo-pastoralism,” which is a new flavor of absentee herd ownership, often bypasses entrustment contracts with local pastoralists in favor of hired drovers and armed protection to move cattle into frontier zones, often crossing national borders, to graze with impunity. Such actions can intensify overgrazing and contribute to the perception of a pastoral “invasion,” which can have dire implications for local livelihoods, wildlife resilience, and regional security. 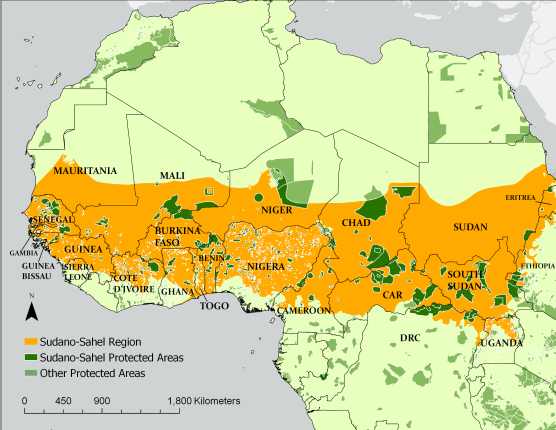 Africa’s Sudano-Sahel region is a distinct bioclimatic zone that covers some of the last intact wilderness in the world and is a high priority for wildlife conservation. It is also home to rural communities that rely on the land for their survival, including pastoralists. Source: Map by Matt Luizza.

Who Owns This Herd?

The issue of herd ownership often receives little attention in policy discussions, in part, due to gaps in empirical data. Determining which groups are engaged in transhumance in a particular landscape, let alone identifying the actual owners of the livestock in question, is a tall order, especially in light of the complex identity politics related to pastoralism. Non-pastoral groups often refer to herding communities with group labels (e.g., Fulani, Peulh, FulBe, Mbororo) that may dramatically differ from the labels the herders themselves would use. Complex sub-ethnic ties and land tenure rights based on tribe, clan, and local geography, all of which can feed into pastoral identity, get overlooked.

These gaps in understanding can produce toxic simplifications about pastoralists, including the broad application of labels such as “militant Fulani” or “Fulani extremists.” The 2018 Global Terrorism Index Report highlights the rise in “Fulani extremists” in Nigeria but does not capture the nuances associated with the label “Fulani,” which can include sedentary farmers, traders, and mobile pastoralists. The report even lumps Fulani statistics with Boko Haram, stating “together, Boko Haram and Fulani extremists are responsible for 63 percent of terror attacks and 88 percent of terror-related deaths in Nigeria.”

Such generalizations blur distinctions between different groups (pastoral or other) and their motivations and may inadvertently provide fodder that further stokes intercommunal tensions. For example, the March attack in central Mali included unsubstantiated claims of ties between the Fulani and jihadist groups. In another example, according to the NGO Invisible Children, many communities in northeastern Democratic Republic of the Congo (DRC) assume Mbororo pastoralists are collaborating with the armed insurgent group, the Lord’s Resistance Army (LRA), in some capacity, even though the Mbororo report being periodically attacked by the LRA.

Neo-pastoralists—those rich, powerful, urban elites—feed into toxic simplifications like “militant Fulani,” as they often have well-armed drovers who do not follow customary practices that dictate access to grazing and provide mechanisms for conflict mediation between herders and farmers. They flout the rules, which can exacerbate local conflict and further reduce the complex socio-ecological dynamics associated with natural resource access to simple narratives like “Christians versus Muslims.”

Moreover, livestock ownership can be a politically sensitive topic, as the very individuals who own some of the most problematic herds also wield great political power and influence to shape agreements, policies, and even national debates regarding management of livestock movements within and between countries in the Sudano-Sahel.

The Central African Republic (CAR), in its entirety, is an “open access resource,” according to Dr. Mark Freudenberger, a specialist in resource tenure and property rights, who spoke at a recent meeting of the interagency and multi-sector Africa Pastoralism Working Group. Neo-pastoralists are expanding the country’s settlement frontier by exploiting its territorial margins. In this vacuum of good governance, outside actors can enter to maximize their access to ungoverned spaces. In CAR’s case, the outsiders include neo-pastoral herds from neighboring Chad and Sudan. These large herds of mostly cattle, enter CAR seeking grass and water. They often burn the landscape ahead of their animals (see Map 2) to stimulate new grass growth and remove the threat of tsetse flies, which can transmit diseases. 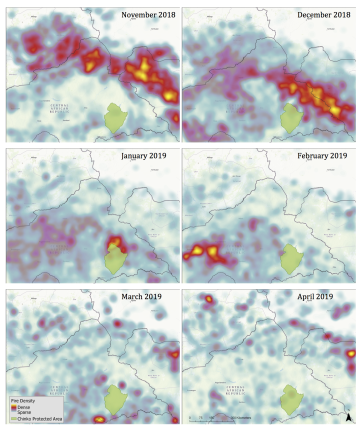 Fires move across Central African Republic during the 2018-19 dry season. Many are intentionally set by herders, including drovers of large neo-pastoralist herds from Chad or Sudan. Source: Fire data courtesy of NASA Fire Information for Resource Management System. Maps by Matt Luizza.

One prime destination in the East is Chinko Protected Area, a pristine expanse of wilderness managed by the South African-based nongovernmental organization, African Parks, and supported by the U.S. Fish and Wildlife Service since 2013. Chinko is located in one of the most remote and embattled regions of Africa but is also home to remnant populations of key wildlife species, including African elephant, giant eland, African buffalo, and African wild dog.

The park estimates that at least 800,000 head of livestock (half cattle) enter eastern CAR each year, and approximately 15,000 to 50,000 of those animals make their way to Chinko, specifically. Many of these herds are large, with 300 to 1,500 head of cattle. As the property of urban elites in Khartoum, Sudan’s capital, the cattle are led by hired armed drovers.

A Window of Opportunity

The lack of clarity on livestock ownership across Africa’s Sudano-Sahel has clear implications for good natural resource governance and regional security. Research is therefore needed to determine who owns livestock here, especially in the territorial margins, how many animals they own, and their true motivations.

Neo-pastoralists operating in this landscape arguably stand to gain the most from keeping large swaths of the Sudano-Sahel ungoverned, as this state of instability facilitates their unrestricted access to ample grazing and water. Last year, U.S. Fish and Wildlife Service began funding a portfolio of conservation projects seeking to better understand and address the emerging conservation challenges associated with transhumance in the Sudano-Sahel, including research on livestock ownership structures, but more work of this nature is needed.

Moreover, the multifaceted nature of this challenge requires extensive cross-sector collaboration between African governments and conservation, security, and development-focused organizations. However, such efforts must go beyond single-sector technical approaches to address herder-farmer conflict and embrace innovations for sustainable natural resource management, diverse knowledge forms (e.g., indigenous knowledge), integration of rural livelihoods with expanding market opportunities, and support of local agreements and governance mechanisms that are recognized and legitimized by the state.

A promising sign of this type of momentum is the N’Djamena Declaration that came out of the January 2019 international anti-poaching conference of ministers of defense, security, and protected areas, which emphasized the need to address and shape regional transhumance dynamics. A follow-up meeting tentatively scheduled for December 2019 in N’Djamena, Chad could offer an important window of opportunity for discussing the key challenges associated with neo-pastoralism, providing targeted guidance to address them, and securing commitments from attending parties.

The declaration already acknowledges the “increased financial investment in livestock herds by local economic actors other than pastoralists, which contributes to increasing the size and number of transhumant livestock herds.” Policy measures, supported by robust research, will be needed to ensure transparency and accountability from those in power who concentrate their wealth in large cattle herds, and to improve the conditions for mobile people and wildlife that call the Sudano-Sahel home.

Satellite analysis shows ‘vanishing’ lake has grown since 1990s, but climate instability is driving communities into the arms of Boko Haram and Islamic State...

WATCH: The issues that afflict the Lake Chad basin cross sectors and national borders – and so should their solutions. Mohammed Bila from the Lake Chad Basin...