The Beginnings of Improving Transparency in Extractive Industries: The Publish What You Pay Initiative - Interview with Peter Eigen - Part II 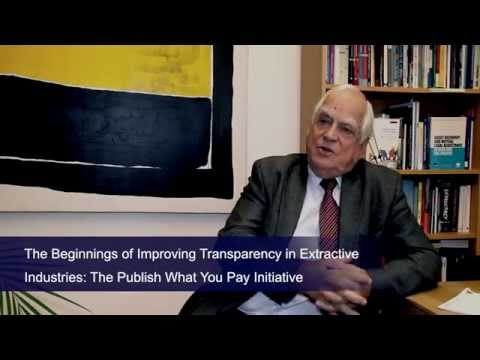 WATCH: In this second video of our series, Peter Eigen explains the basic ideas of EITI’s predecessor, the ‘Publish What You Pay Initiative.'

The governance challenges of natural resource extraction are enormous. What can be done to improve natural resource governance? ECC’s Stephan Wolters talked to Peter Eigen, Founder of Transparency International and Chair of the Extractive Industries Transparency Initiative (EITI) from 2006-11. As a leading expert on the challenges of corruption, he provides exciting insights and evaluates success and failure of various approaches, including EITI.

"We started a campaign called 'Publish What You Pay' together with a number of other NGOs such as Global Witness and Oxfam. It initially addressed companies because many of them made huge payments to host governments, which were not disclosed to the public or even to the countries' parliaments. In the case of Nigeria, for instance, we found out that a small, powerful elite received revenues in the order of 50 billion dollars annually. They spent the money as they saw fit, with no accountability to the people. As a result, about half of Nigeria's 150 million inhabitants live below the poverty line. That is why we asked them to 'Publish what you pay', but when some of the host governments, in particular Angola, did not allow publishing the numbers, we changed course to include governments as well.

To our great delight, the president of Nigeria, Olusegun Obasanjo, decided not only to allow the companies to publish what they paid, but also to make it mandatory and further to report what the government received from the companies. As we found out through the years of reporting, billions of dollars fell between the cracks. This information was a direct benefit for the people of Nigeria, because otherwise this money would have disappeared unnoticed. We have 35 countries that have produced EITI reports. 26 of them comply with higher disclosure and auditing standards, including validation by independent companies. Hundreds of millions of people in resource-rich countries can now hold their governments accountable for resource related payments."

More background information on our series showcasing the high relevance of EITI's aim to improve transparency: Read this ECC interview with activist Alina Banu on civil society opposition to a gold mine project in Romania.

The Transatlantic Academy published an insightful study on extractive industries and the resource curse.

The shift to a low-carbon economy is not only underway, it is accelerating. What does a rapid energy transition mean for the countries that supply the inputs...