Impact of the US Presidential Memorandum & Way Forward Under Trump 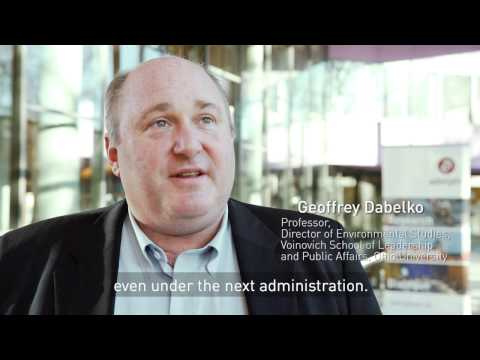 US President-elect Donald Trump will take office in a week's time on Friday, January 20, 2017. In September last year, the Obama administration issued a presidential memorandum to ensure that climate change-related security impacts are fully considered in the development of national security doctrine, policies, and plans. What are its impacts? What is the way forward under the President-elect Donald Trump?

"The presidential memorandum, September 2016, from the Obama administration, is significant for a couple of reasons and I think it will continue to be, even under the next administration.

One is that, in some ways, it captured what had been going on as well as inspiring more activity to be going on, integrated activity, getting 20 agencies and departments to systematically think about how climate change impacts their portfolio and how their tools and their toolboxes can proactively address climate and security issues for the United States.

While some of those regulatory and executive actions can be undone by those who may oppose climate change, you still cannot unlearn the lessons or even just the networking of the people that that brought together, the intergovernmental processes that that resulted in.

While top-level initiatives, and that as a priority, may go away, a lot of the working-level relationships, in terms of the day-to-day, taking climate security into assessment and action, are things that I think can persist, even with a transition in the administrations.

Climate change is not going to be the only issue where the changing nature of the US engagement in international institutions is likely to change, likely to be different. That said, I think if we remember that, at least in the United States, the federal government has not always been the leader on environmental issues and in fact is often a follower, sometimes a follower that can facilitate and support and subsidize action, sometimes be a great barrier, and we have a lot of relatively recent experience in that. So in the history of environmental progress in the United States, largely driven by local and state-level innovation and action where governors have to, day to day, address how these issues go on the ground, we need to remember that California is the sixth largest economy in the world and understand that we still have significant leadership in this climate space and we need to go beyond the easy assumption that it is all out of Washington and we need to look for local and state-level leadership, private sector leadership, faith community leadership, leadership from the military, other places that are not as expected and may not be as targeted to the traditional ‘diplomaticos’ from the State Department and the Chair from the State Department and understand that we can still make progress and must make progress at these other levels as well."

Sue Biniaz on Getting the U.S. Back on Track for Climate Action

“The more the United States can get itself back on track, the better position it is in to exercise climate leadership,” says Sue Biniaz, a member of Special...

The Divided States of America

The United States is at a critical juncture in its future climate policy directions. Biden’s electoral victory and the appointment of former Secretary of State...

Climate Action and Climate Diplomacy: The Search for Consensus in a Time of Crisis - Letter from Washington

The pandemic and racial justice protests call for justice and crisis preparedness – an opportunity also to act on climate change. Successfully taking advantage...

US breaks from Arctic consensus on climate change

At a meeting of the Arctic Council, secretary of state Mike Pompeo refused to identify global warming as a threat, instead hailing an oil rush as sea ice melts...

U.S. diplomats used to receive guidance about climate change and migration. The Government Accountability Office is recommending the State Department bring it...

“Ignore Washington” - Why climate action is a Republican issue

The Global Climate Action Summit has created a subtle, yet resonating effect on international climate diplomacy. Arguably, its biggest contribution lies in...