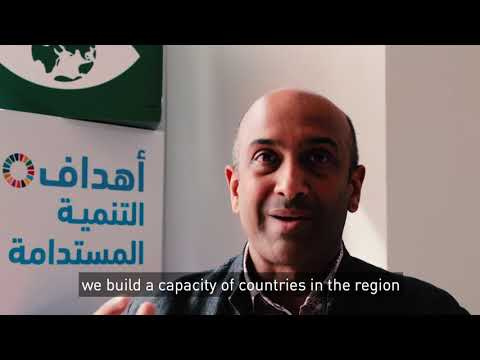 WATCH: In this interview, Kishan Khoday, Team Leader for Climate Change, DRR and Resilience in the Arab Region for the United Nations Development Programme (UNDP), explains how the initiative ‘SDG Climate Facility’ is betting on integrative measures to addresses security in crisis countries by tackling the climate and environmental SDGs.

While translating climate action into reality still poses a challenge for the international community, the security nexus approach might offer a solution.

"Take the Middle East and North Africa region: the region is already the most water insecure region in the world; it is also the most food import-dependent region in the world and temperatures are rising faster than the global average. Some estimates are that over 7 million people could be displaced in the coming decades owing to climate change. With only 10 years left to achieve the targets under the Sustainable Development Goals and the Paris Agreement, urgent action is needed to take it from global dialogue to local action.

So what do we do? What action are we taking? As the UN Development Programme we are now launching a new regional initiative for the Middle East and North Africa region on the nexus of climate change and security. This is a new programme called the ‘SDG Climate Facility’, it’s a joint platform between the UNDP, the League of Arab States and our partner UN agencies in the region, including agencies such as the UN Environment and the World Food Programme. Through this platform, we build a capacity of countries in the region to put in place new innovative tools for assessing the nexus between climate change and security, for new early-warning systems to integrate climate action into humanitarian and development policies in crisis contexts, and to really support local innovation in terms of building resilience at the community level.

In addition to our regional cooperation, we also have approximately 500 million dollars of grants going to countries and local communities across the region on various aspects of the SDGs, the environment SDGs, on climate action, on biodiversity, on water, waste management, land degradation. And a significant part of this work is actually in crisis countries, such as in Syria, or Palestine or Iraq, Yemen, Sudan, Somalia, etc. In these countries we build capacity to be able to integrate green measures and sustainable measures into crisis recovery so that, as communities recover, they can foresee and forecast future climate risks and make sure that we support resilient recovery pathways that can help achieve both the SDGs, as well as long-term solutions to the crisis faced in the Arab region."

WATCH: Climate change plays an exacerbating role in the armed conflict in Iraq. In this video, Iraqi experts explain how climate change impacts such as...