Navigating a Green Blue Deal for the Middle East

Water is a critical resource everywhere, but in the Middle East, it is a defining issue. Changing demographics, poor management and climate change are pummelling the region’s already alarming water security situation. EcoPeace Middle East’s brand new report ‘A Green Blue Deal for the Middle East’ taps into water as a make-or-break issue for regional cooperation, economic development, and even for the future of peace negotiations.

Green Deals have taken centre stage in recent political discussions around climate and the environment in the US and the EU. With an eye on achieving emission reduction and conservation goals, increasing adaptive capacities, and rebuilding a greener and fairer post-pandemic economy, Green Deals acknowledge the decisive role a healthy climate and environment play for development and seek to steer economies towards a comprehensively sustainable path. EcoPeace’s proposed Green Blue Deal does precisely that, tailored to the particular conditions and needs of the Middle East.

In the Middle East, climate change has long ceased to be a problem of future generations. According to the IPCC, the Eastern Mediterranean is a climate hotspot, with forecasts projecting a temperature increase of up to 4 degrees Celsius by mid-century. The region is also the most water scarce in the world. Climate change-related impacts are escalating already worrying trends around water, energy and food insecurity, putting further strain on regional relations and prospects for peace.

In its 26 years working on water diplomacy in Israel, Palestine and Jordan, EcoPeace has engaged at all levels of the regional water sector. Whether it is by conducting research and analysis, educating children and youth, engaging the private sector, or influencing high-level decision making – EcoPeace has been there, done that. This experience puts the organization in a unique position in terms of making ambitious yet feasible context-specific policy recommendations that take into consideration the complex dynamics of the Middle East. 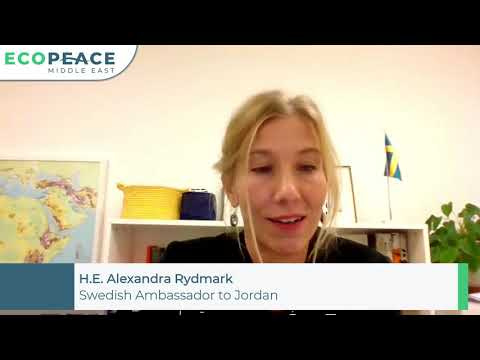 To understand how a Green Blue Deal in the Middle East could work, the report sets out the challenges and potential each state brings to the table.

On top of its own demographic growth, Jordan has absorbed hundreds of thousands of Syrian refugees. This has left its capital’s citizens with only eight hours of water per week. Rising urban domestic needs have also reduced the fresh water allocated to farmers in the Jordan Valley. Yet at the same time, Jordan’s energy sector represents huge opportunities for climate action. Jordan has a lot of land that could be used for solar parks – a great comparative advantage compared to Israel. Already in 2017, the Jordanian Ministry of Environment released a green growth plan called “Jordan 2025” that prioritized water, energy and food security. However, the plan lacks clear targets and financing and has not been fully adopted by the national government.

A recently unveiled “Israeli Green Deal” draws on the economic challenges brought by the COVID-19 pandemic as an opportunity to increase investments in clean-tech and renewable energy, ecosystem restoration and the improvement of environmental performance, with a focus on creating green jobs and reducing GHG emissions. Though it has yet to be adopted by Israel’s cabinet and sets no specific targets for reduction, in 2019 the Israeli Energy Minister announced a plan to raise the renewable energy target from 17% to 30% by 2030. Given its technological advantages that allow it to desalinate and clean sea and wastewater, and the economic advantages to look for alternative energy sources in the international market, Israel is in a much better position than Palestine and Jordan when it comes to adaptive capacity to deal with climate-related pressures. Yet, as water insecurity rises in Palestine and Jordan, the threat of unrest in the region lingers. The continued blockade on Gaza impedes basic infrastructure and resource management, with the mostly untreated sewage of 2 million people contaminating the Mediterranean and undermining Israel’s water treatment capacity. Transboundary problems require regional and multilateral solutions – and this is no exception.

Palestine’s water challenges can hardly be overstated. Due to the Israeli-Egyptian blockade, overpopulation and mismanagement, up to 96% of the Gaza Strip’s water is deemed unsafe to drink. Climatic pressures reducing water availability in the region are set to further complicate this scenario. In the 1990s, the Oslo Accords – of which water was an integral part – allocated 75% of ground water from the Mountain Aquifer to Israel, with the remaining 25% allocated to the West Bank. Although the accord has Israel recognize Palestinian water rights, it does not specify access issues. Despite demographic changes in the past decades, allocated waters were not renegotiated. The agreement’s Joint Water Committee has proven to be a largely inefficient mechanism to solve water management issues between Israel and Palestine. The Palestinian Environmental Cross-Sector Strategy for 2017-2022 has a focus on environment and sustainability and is framed on the 2030 SDG goals. In a recent speech, Prime Minister Mohammed Shtayyeh underlined the need to mainstream environmental sustainability issues across the economy. One thing is clear: for Palestine, delivering on targets will require extensive investments and regional cooperation.

The Green Blue Deal in a nutshell

Bringing the parties in the Middle East to the negotiation table is no simple task. A culture of peace is yet to be established, with youth on all sides mostly exposed to stereotypes of each other. Yet climate and environmental issues can arguably serve as levers for regional cooperation, because of their borderless, stateless and nationless characteristics. The proposed deal is not intended as a holistic policy program. Instead, its intention is to spur momentum for governments to create their own “green blue” plans.

1. Cooperation to improve adaptive capacities on water and energy security

EcoPeace already leads a flagship project on water and energy that is looking to advance regional interdependency by creating a desalinated water – solar energy community, with the former produced by Israel and Palestine, and the latter by Jordan. Although initially all sides were wary of creating such mutual dependencies, tides have started to turn, with governments increasingly recognizing the advantages of cooperation for their individual security interests. A pre-feasibility study concluded that all countries would collect substantial economic, environmental and geopolitical benefits from exploring these potentials: Israel would achieve its Paris climate commitments; Jordan would increase its GDP by 3-4% and achieve water security; and Palestine would be less dependent on Israel for water and energy.

Advancements in water technologies today mean that Palestinian water rights can be achieved without reducing water availability on the Israeli side. Achieving this balance requires allowing the Palestinian side to increase water pumping, while Israel reduces its own pumping and increases desalination, which already provides almost 70% of Israel’s drinking water. A further potential lies in tackling water pollution from all sides; the COVID-19 pandemic has demonstrated the urgent need to create conditions in which basic hygiene standards can be maintained, which is currently not the case for Palestine, creating unliveable conditions for Palestinians and spill-over health problems for the region.

The Jordan River is threatened by pollution and excessive water diversion by Israel, Jordan and Syria, while Palestine has had no access to it since 1967. Given that the river itself constitutes the state border, its rehabilitation requires multilateral cooperation. An internationally-supported Regional Jordan Valley Master Plan (JVMP) has devised a strategy for rehabilitating the whole valley and generating multiple benefits. However, while it has been adopted by Jordan, strained relations between Israel and Palestine have meant that the plan has not been taken up yet by these countries. To keep up the momentum, EcoPeace has engaged the private sector in the valley, by advancing ecotourism, climate-smart agriculture, fish farming and solar powered refrigeration for local agriculture, promoting grey water reuse, and focusing on green jobs. Furthermore, a proposed trilateral Jordan River Commission would further foster regional cooperation, with the potential to eventually include the other riparian states Lebanon and Syria.

4. Promoting public awareness and education programs on diplomacy in the water and climate fields as a means of conflict resolution and peacebuilding

In a region suffering from protracted conflict for over half a century, education has a crucial role to play. EcoPeace believes engaging youth can help create public support for cooperation and foster future local leaders. Programs on water and climate diplomacy at both school and university levels have proved successful in creating cross-border networks and awareness about transboundary regional issues.

In essence, the Green Blue Deal proposes harnessing two of the Middle East’s widely available resources – the sun and the sea – to create healthy regional interdependencies, promote trust and foster cooperation, while addressing and mitigating climate-related impacts to the environment and security. EcoPeace Directors Yana Abu Taleb (Jordan), Nada Majdalani (Palestine) and Gidon Bromberg (Israel) offered concrete suggestions for how this could be achieved by looking towards practical and solvable issues in the Arab-Israeli conflict, which they call “low hanging fruits.”

One of these (relatively) low hanging fruits is the water issue. Water is an integral part of the Oslo Accord. Because parties cannot find agreement on other issues of the Accord (and, therefore, do not sign it), the comparatively simple-to-solve issue of shared water management does not advance. With the Green Blue Deal, EcoPeace suggests that water management be decoupled from the peace agreement’s contentious issues. This should not only result in better water management and better living conditions for all, but should also create a precedent for cooperation and support a culture of peace, in which parties see in each other a partner with which they can negotiate. An important boost to diplomacy in a region that desperately needs it.

To read the priority recommendations to the Israeli, Palestinian and Jordanian governments for each of the 4 pillars, download the full report here. The report also addresses the international community, inviting it to create a ‘Middle East Green Blue Deal Coalition of the Willing.’

A Green Blue Deal for the Middle East

This report seeks to inform Israeli, Jordanian and Palestinian policy makers, and the understanding of international stakeholders, as they work to meet climate...

Tackling Food Security and Protracted Crisis in Horn of Africa

The Kingdom of the Netherlands has contributed $28 million to back FAO's work to boost the resilience of food systems in Somalia, Sudan, and South Sudan - part...

The ECC Factbook is an online tool presenting over 120 conflicts with an environmental dimension. This month, our Factbook team reviewed the links between food...

From Curse to Blessing: How Africa’s Natural Resources Can Build Peace

While natural resource development can generate economic success, it can also increase the likelihood of conflict, particularly in Africa. Ongoing violence in...

WATCH: The Nile basin features significant conflict over access and rights to the Nile water resources among its eleven riparian countries.

Migrants and Syrian refugees have become the new 'stranded polar bear' of climate change imagery. But most such impacts will seldom be so dramatic or camera...

The ECC Factbook sheds light on the role of environmental factors in over 100 conflicts worldwide. Did climate change contribute to the Syrian civil war? Find...