Preventing water conflicts between India and Pakistan through climate diplomacy 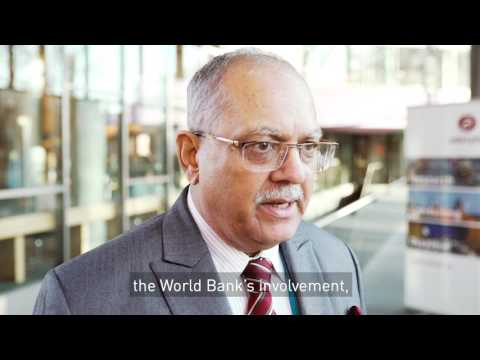 WATCH: The Indus Water Treaty is a long-standing diplomatic mechanism to ensure peaceful transboundary water management. The Former Secretary of Defense in Pakistan, Lieutenant General (ret.) Tariq Ghazi, explains why the agreement is so precious for maintaining peace in times of climate change.

"India and Pakistan have gone to war over a number of reasons but the impending disasters as a result of the Indian prime minister’s recent statement of using water as a weapon of war gives rise to the feeling that there is going to be a next conflict  between India and Pakistan of water sharing and water availability. [...]

There is an example within India and Pakistan of the best practice. I think it is a unique example of two countries that are hostile to each other, having a cooperative mechanism through the Indus Water Treaty. It is a treaty brokered in 1960, it is one that was done by the World Bank’s involvement, it is done within arbitration clause through the International Court of Justice here at The Hague, and that is the prime example of the best practice that you can have in transboundary sharing.  Now whereas the Indus Water Treaty talks about sharing the waters, I think we need to go a step beyond that and talk about the management of the water as well. [...]

More importantly, we also have in South-Asia a communality developed through the South-Asian Association for Regional Cooperation and if you look at this association, they formulated a brilliant climate change action plan that brings in all the countries together on a common platform, on common programs and on common action. Unfortunately we have had no implementation or enforcement of the provisions that the leaders of these countries have signed on.

So I think the other best practice that we need to bring in is: When you have an agreement, everyone must ensure its implementation and enforcement within a very short time-frame and not use it for political reasons to somehow delay those activities that they consider as adverse to their own purpose."

From the Factbook: Climate change, water and Taliban recruitment in Afghanistan

With the Taliban back in power in Afghanistan, and with the Afghan people’s climate-induced humanitarian needs as acute as ever, the need to promote resilience...

Even as Pakistan's questions about Indian hydropower projects went unanswered, both sides at the Indus Waters Treaty meeting showed an intention to engage.

Five bright spots in the Mekong

Few places have suffered more from the COVID-19 pandemic than southern China, the region where the novel coronavirus was first detected in the city of Wuhan...

On 28 January 2020, the German Federal Foreign Office held a conference in Berlin to mark the launch of the Green Central Asia initiative. Opened by Foreign...

A multi-sectoral and multilateral approach to South Asia's rivers could provide sustainable development, but it needs to include those already marginalised by a...

After close to 40 years of armed conflict, Afghanistan may be poised to begin a period of economic recovery. Electrifying remote areas and establishing...

Villagers in Bhutan and India come together to share river

The experience of the Saralbhanga River, which flows from Bhutan to India, shows the power of involving local people in river management.