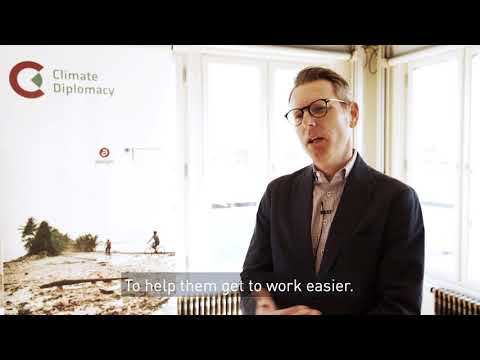 WATCH: Cities are main drivers of climate action. The relevance of urban areas for mitigation and adaptation cannot be underestimated and yet, the challenges they face are daunting. John de Boer, Managing Director of the The SecDev Group, shares positive examples of cities, such as New York and Medellin, which dealt with Hurricane Katrina and homicides in the best possible way. He argues that we need out-of-the-box thinking to respond to urgent climate risks.

"I work with cities. Why? The main reason is because cities really are the future and also the present. You see the majority of the world’s population living in cities today. You also see cities as having the concentration of power and wealth. And they are also on the frontlines of dealing with many of the world’s most pressing problems, including climate change, urban violence, extreme poverty, where it is concentrated in cities, migration. So cities are an entry point, not only to deal with some of these problems but also solutions.

We have lots of levers. We have excellent examples of cities dealing with these many problems. One is Medellin, which about 2 decades ago had some of the highest homicide rates in the world. What they did was to connect people, physically to these spaces, build soccer stadiums in the poorest neighbourhoods, to help them feel part of society. To help them get to work easier. It is this kind of outside-of-the-box thinking that we need to deal with some of these problems. In the wake of Hurricane Katrina and also Sandy in New York, to see how New York faced and really looked at its own limitations to deal with that is another telling example.

To deal with the risks and the pressing problems in the world today, an integrated solution is absolutely essential. What does that mean? That means bringing together multiple actors from the private sector, public sector, but it also means bringing together different specialists, work with healthcare providers, security providers, urban planners, climate change experts. These solutions we all face together and we need to come up with modern ways to deal with these problems together.

I think the barriers are that none of these issues are straightforward. An environmental issue, whether it would be flood, extreme flooding, droughts, these oftentimes are due to climate-related issues, but they are exacerbated due to political considerations, right? So unless you look at these two factors jointly, it is very difficult to solve these problems. This is why we need a collective approach to dealing with these challenges."

Cities in a Crisis: COVID-19 and Climate-Fragility Risks in Urban Environments

In his address on this year’s World Cities Day, UN-Secretary General António Guterres recognised that “cities have borne the brunt of the pandemic” and called...

Human mobility plays an important role in the shaping of the world's urban centers. These four infographics, prepared by the Overseas Development Institute (ODI...

WATCH: In this clip, Luc Bas, Director of the European Regional Office of the International Union for the Conservation of Nature (IUCN), shares the IUCN’s...

SDG11 on cities – what can its role be in foreign policy and sustaining peace?

In an increasingly urbanised world, global resilience cannot be achieved without cities. Separating a local from a national or international sustainability...

Climate Change Can be Seen Everywhere in Slums

At COP24, India-based Sheela Patel from SPARC talked to Lou del Bello about how climate change affects people in informal settlements the most – and about...

COP24: What Does it Mean for Cities and Regions?

What outcomes do the agreements achieved at COP24 hold for cities and regions? Despite the decisive part the so-called non-state actors play in achieving the...