On June 3rd 2016, the European Union joined six of its Member States and 14 other countries – including China and the United States – and became the 21st member of Mission Innovation, an initiative of governments committing to double their clean energy research budgets over the next five years. This, we argue, is a vitally important first step of taking Europe’s energy innovation imperative more seriously.

On June 3rd 2016, the European Union joined six of its Member States and 14 other countries – including China and the United States – and became the 21st member of Mission Innovation, an initiative of governments committing to double their clean energy research budgets over the next five years. This, we argue, is a vitally important first step of taking Europe’s energy innovation imperative more seriously.

The energy innovation imperative, accelerating the clean energy revolution through strengthened innovation policy,  should be a central guiding principle for European policy makers seeking to close the staggering ambition gap in the Paris Agreement.
The argument substantiating this recommendation has three steps:

I. Europe’s historical responsibility and the magnitude of the ambition gap imply a focus on global, not European decarbonisation

The main result of the Paris Agreement is the ambition to limit global warming to significantly below 2 °C. The collective national commitments (INDCs), however, are a far cry from what is needed to achieve this goal. Assuming optimistically that countries will indeed implement their INDCs in the conditional version by 2030, there will still be a huge gap – about 12 GtCO2E per year – to the 2°C emission trajectory. Even decarbonising Europe entirely would be far from sufficient to close the ambition gap. Indeed, to close the emissions gapin 2030 one would need almost four Europes less. 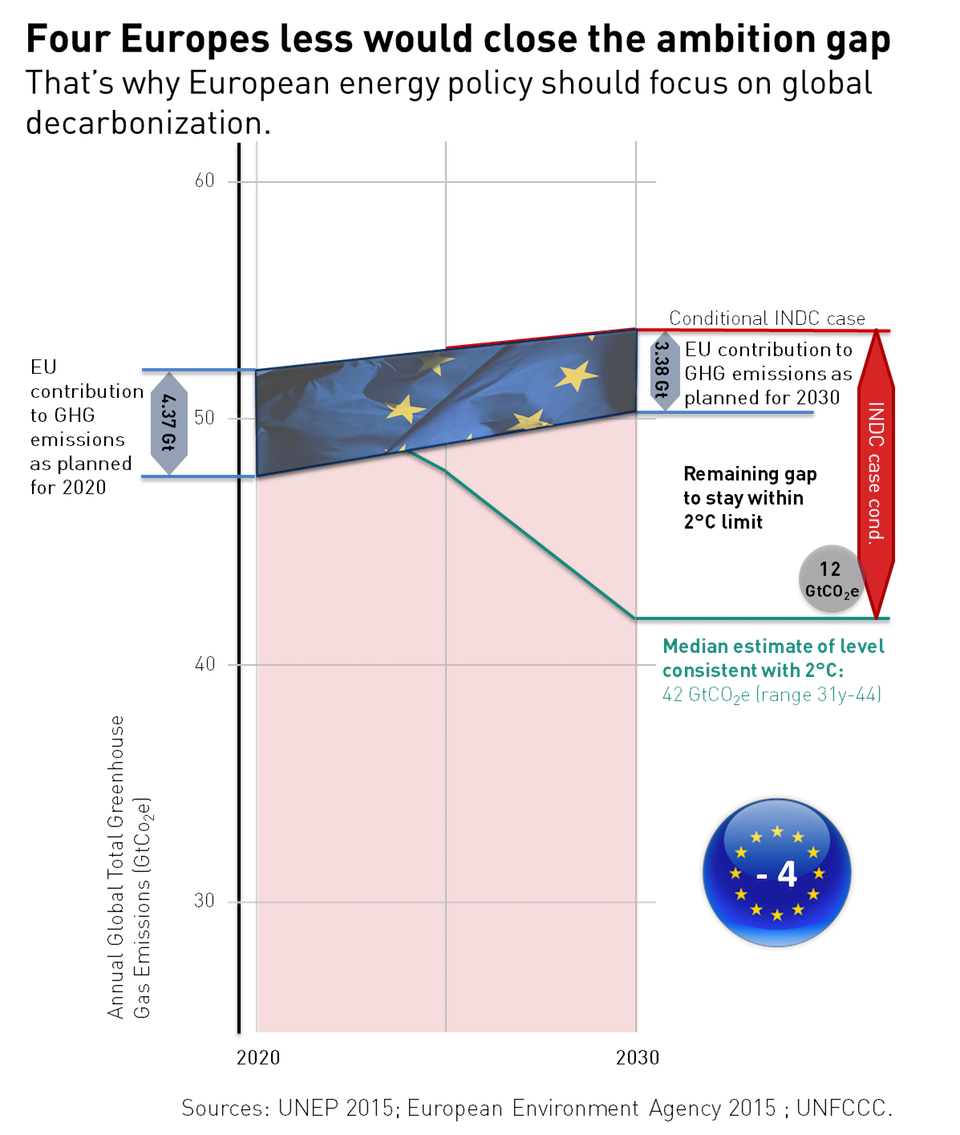 This basic fact, illustrated in Figure 1, should make one point abundantly clear: Our ethical responsibility for curbing emissions, motivated either by past emissions and/or our capability to invest in mitigation, should lead us to focus our effort on those policies that best advance global decarbonisation, not merely Europe’s. This is a practical point but also a deeply ethical one: While there are no convincing ethical arguments why bearing historical responsibility implies a focus on local decarbonisation, the ethical imperative to minimise the negative consequences of climate change strongly suggests a focus on global decarbonisation when designing European energy policy.

To answer this question, we need to understand the drivers of historical and current decarbonisations. The most significant decarbonisations in OECD countries between 1971-2006 that were not the result of economic change were the French and Swedish decarbonisations of the electricity sector in the 1970s driven by oil price shocks. Recently, the declining cost of wind and solar has driven decarbonisation efforts beyond those countries where it was massively supported by policy.

In those countries – such as Germany, South Korea and the US – where massive deployment subsidies created the economies of scale and incremental innovation responsible for cost declines, climate policy was one driver among many, with anti-nuclear sentiment and stimulus spending being other dominant national motivations. In contrast, the Kyoto Protocol and subsequent efforts to set internationally binding targets and compel countries through climate arguments alone have had little if any effect on decarbonisation.

The importance of incentivising climate mitigation and adaptation has been recognised in climate finance and European climate policy. Yet, it is not supported by European energy policy choices focusing on global decarbonisation potentials. Even if there is more climate ambition in the future, the availability of superior technological alternatives will make the politics and economics of international climate policy significantly easier.

Yet, technological progress is too slow and incremental. The decarbonisation of the electricity sector – generally considered easier than decarbonising other sectors – is still lagging behind and is hindered by storage costs that make renewables, even when competitive for electricity generation, uncompetitive at the level of the energy system (as expressed by the levelised cost of electricity (LCOE)). Moreover, as most recently demonstrated in an article in Nature Energy titled “Solar power needs a more ambitious cost target,”renewables still need to get continuously cheaper because each additional unit of renewable energy in a specific location creates less additional value since it will mostly generate electricity when it is not scarce (value deflation). Importantly, advanced solar and storage technologies will not necessarily be advanced by current market participants since such technologies draw on new materials, which is not in the interest of existing firms heavily invested into supply chains and manufacturing infrastructure for silicon solar and lithium-batteries.

Research into other decisive technologies, such as carbon capture (followed by utilisation or storage; CCUS) is still heavily underfunded (EUR 1.3 billion provided by EU policies so far), despite this technology having the largest expected returns across low-carbon RD&D opportunities and the fact that the cost of climate mitigation without CC(U)S would increase by EUR 1.2 trillion for Europe and double globally – making successful climate mitigation appear a distant and unlikely prospect. 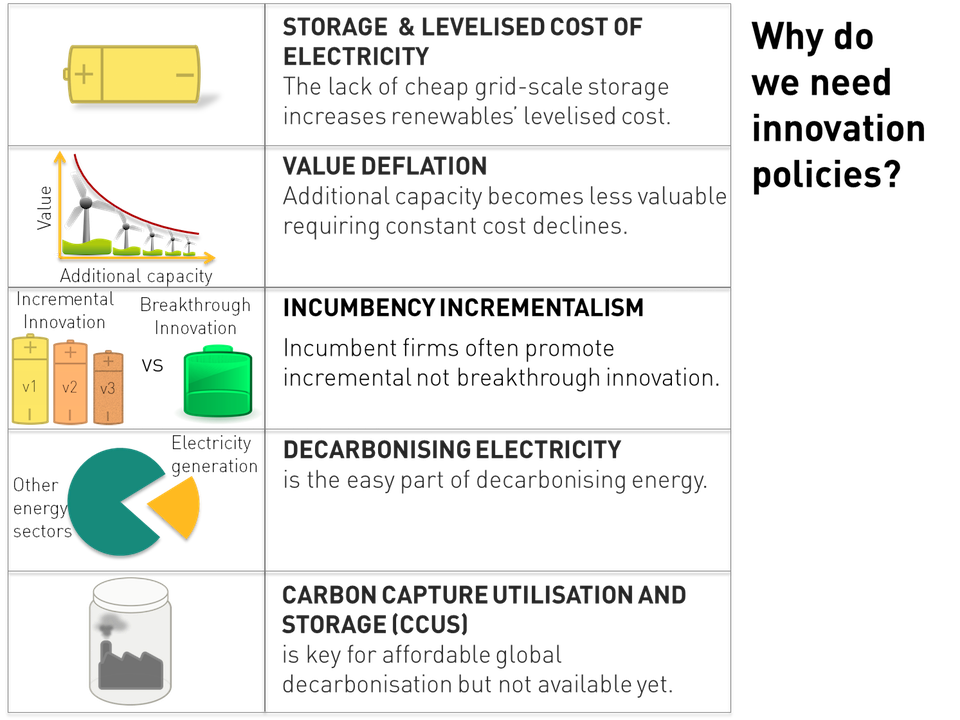 Despite a lot of progress, there is thus a tremendous energy innovation gap that hinders global decarbonisation. Furthermore, we are not on a trajectory where closing this gap is just a matter of time and business-as-usual. Instead, it appears that energy innovation is systematically neglected despite comparatively low costs and its necessity for global decarbonisation. It is this innovation gap we should close to enable the closing of the ambition gap.

III. Europe can and should do much more to close the energy innovation gap through dedicated innovation policy

While the EU and its Member States have some of the most ambitious climate policies in the world – displayed schematically in Figure 3 – they are primarily designed to drive European, not global decarbonisation. 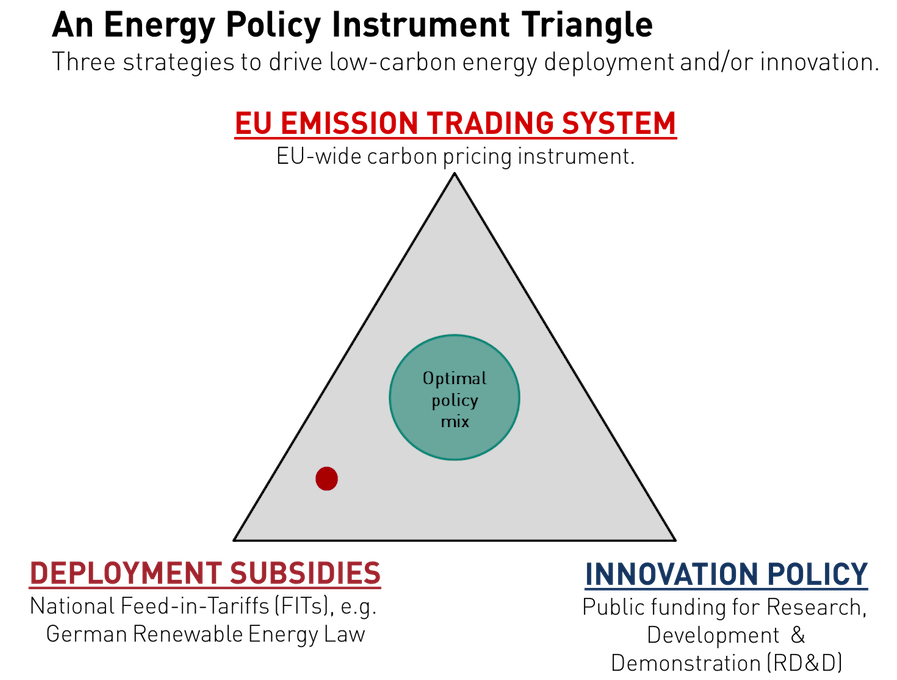 The European Emissions Trading System (EU ETS) fosters incremental and process innovation, but is unlikely to induce breakthrough technological innovation. The reason for this is that the price signal set mostly affects technologies that are on or close to market, whereas technologies that are further from the market may be ‘trapped’ in the ‘valley of death’, unlikely to come to market without public RD&D support (see Figure 4). While thus reducing European emissions, the EU ETS does relatively little to facilitate global decarbonisation. 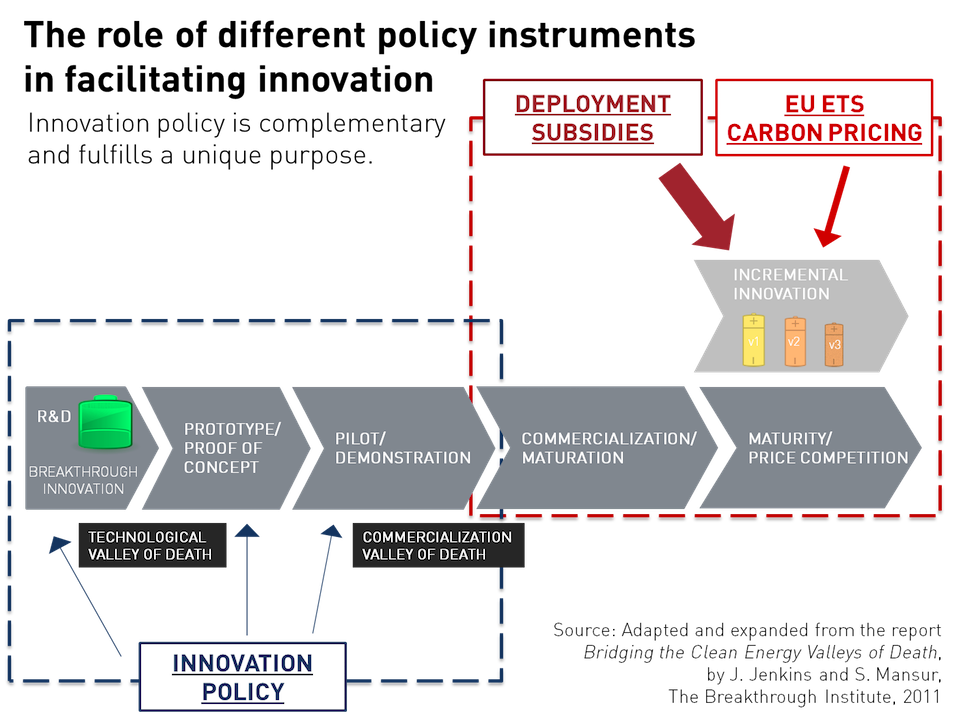 Figure 4: The role of different energy policy instruments in the innovation process

Feed-in tariffs have been the most significant national energy policies providing massive deployment support for existing low-carbon technologies, particularly wind and solar. Arguably, resultant deployment contributed to economies of scale and incremental innovation that drove down the cost curve of these technologies. However, this has come at an extremely high cost, while explicit innovation policy (RD&D), generally considered to be much more effective in inducing innovation, has been extremely neglected. In 2014, for example, Germany alone spent over ten times more on deployment subsidies for renewables than all of Europe combined on renewable RD&D (see Figure 5).

Since electricity is covered in the EU ETS, this deployment had no effect on European emissions, while its effect on global decarbonisation – through price declines and improved technologies – could most likely have been multiplied had a larger share been spent on RD&D rather than on deployment within an emissions-capped market. Furthermore, public RD&D would have benefited European high-tech industries whereas deployment subsidies mostly benefit renewable manufacturers outside the EU.

To summarise, there is thus a strong ethical imperative as well as an economic, political, and technological case for significantly scaling up the European energy innovation effort.

Besides scaling up the innovation effort – as committed to by joining Mission Innovation but moving beyond as well – we recommend five general principles on which European energy policy choices could be based to better reflect the energy innovation imperative:

As we have argued above, these types of measures contributing to an increased energy innovation effort are the most likely drivers of increased ambition for global decarbonisation. Closing the energy innovation gap should thus be a pragmatic and an ethical climate policy priority if Europe is serious about its historic responsibility.

The European Commission, backed by 11 EU member states, refused to sign a declaration on “sustainable and smart gas infrastructure” tabled by the Romanian...

The risks of a global supergrid

China’s vision of a global energy system overemphasises the benefits of connectivity. Planners and investors also have to consider the potential impacts on...

On a visit at short notice to Germany, Russian President Vladimir Putin has met with German Chancellor Angela Merkel to discuss a range of bilateral and...

French environment minister Nicolas Hulot has resigned live on national radio in a surprise move that will come as a blow to president Emmanuel Macron’s green...

The UK has been accused of trying to “fudge” how much money it spends on subsidising coal mining and fossil fuel use despite its pledge to phase out...

The EU’s decision to phase out palm oil biodiesel is likely to backfire, with negative repercussions not just on the countries concerned but also on...

Russia is “playing politics with energy supplies,” said U.S. Secretary of State Rex Tillerson at a major policy speech at the Wilson Center in November. In...