The epicenter of violence in the unstable country of Mali has historically been in the north, a contested region from where Touareg separatist and jihadist armed groups launched an insurgency against the state in 2012. But over the last two years, there has been a marked shift in communal and anti-state violence to the central region, and climate change may have played a role. 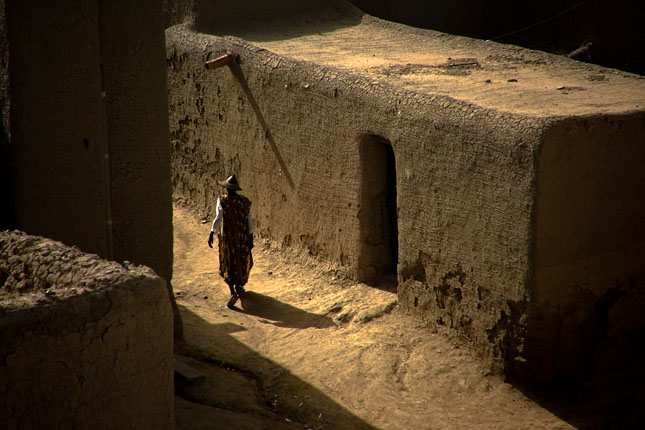 The epicenter of violence in the unstable country of Mali has historically been in the north, a contested region from where Touareg separatist and jihadist armed groups launched an insurgency against the state in 2012. But over the last two years, there has been a marked shift in communal and anti-state violence to the central region, and climate change may have played a role.

Herders, farmers, and fishermen have cohabited the middle region of Mali, known as the Macina, for centuries. Conflicts were generally peacefully managed by local chiefs in charge of land and water, the so-called maitres du paturage, des eaux, et de la terre (“the masters of pasture, water, and air”). Yet these traditional institutions have lost much of their legitimacy and efficiency over the years, even as climate change and weather unpredictability have reduced the amount of water and grazing lands available to farmers and herders.

The decline in these customary institutions has been partially due to the state using them to favor some groups over others. For example, the informal group of chiefs that collect the tax to access grazing lands have used their power to impose overly high taxes on the Peul, a herder ethnic group that has been abused by state security forces and discriminated against in other ways. But the appearance of Islamist armed groups over the last two years in the Macina has made things much worse.

Since 2015, Islamist armed groups have progressively increased their presence in central Mali, where they have executed civilians and government officials and committed other abuses. Human Rights Watch has documented about 40 such targeted killings of suspected informants by Islamist armed groups. Not coincidentally, communal violence has also increased.

In some regions, more than 80% of public schools are closed due to the presence of jihadist groups

Jihadist groups have been effective at exploiting existing grievances between different ethnic groups, recruiting local residents, inflaming tensions, and supplying weapons. They have been particularly supportive of the Peul compared to other groups like the Bambara and the Dogon. According to community leaders I spoke with during a research trip this year, Islamists have often intervened in conflicts over access to lands on behalf of the Peul, especially after Peul herders had been murdered. This in turn sparks retaliatory killings and so on.

For example, on February 2017, alleged Peul Islamist fighters killed a Bambara shopkeeper near the town of Ke-Macina in the Ségou region. This sparked retaliatory killings against Peul villagers by a Bambara self-defense militia known as the Dozos, leaving at least 21 people dead, including children.

A number of Peuls have turned to jihadist and self-defense groups to seek justice for the state’s treatment of them and to sustain their livelihoods, making disputes regarding grazing lands and access to water increasingly deadly.

“In the Macina today, herders don’t want to follow the rules established by the traditional chiefs,” one Peul community leader told me in Bamako this year. “Instead, many of them have armed themselves and refuse to pay the taxes to get access to grazing lands. Jihadists groups have been more responsive to the grievances of the herders than the government, and have encouraged these groups not to pay any taxes to get access to grazing lands, arguing that being God’s land, it should be free for everyone.”

For many Peuls, the justice provided by jihadist groups based on Sharia is seen as more legitimate and effective than other forms of traditional or formal justice. According to security experts, jihadist groups present in the central region of Mali include Al-Mourabitoun, Al-Qaeda in Magreb (AQMI), the Movement for Unity and Jihad in West Africa (MUJAO), Ansar Dine, and smaller and nebulous groups such as the Front de Libération du Macina (FLM) from Hamadoun Diallo, a well-known Peul and Islamic preacher. In some hardly accessible regions, such as Tenenkou and Youwarou, more than 80 percent of public schools are closed due to the presence of jihadist groups that oppose the secular schools provided by the state.

Some recruits are attracted by the Islamic ideology, but many more have joined for other reasons

These are a number of interrelated factors that have led to the increase of jihadists groups in central Mali and the effect of climate change on people’s livelihoods is simply one factor among many. But it is clear that these groups have been instrumental in manipulating the grievances of some of the most climate change-affected communities. While some recruits are attracted by Islamic ideology, many more – I would argue the vast majority – have joined jihadists because of unresolved conflict over access to grazing land and water, lack of justice and protection, and corruption.

My research is ongoing and it’s important not to generalize the experience of Mali. There are many factors mediating the relationship between climate change, jihadist recruitment, and violence, ranging from local institutions and a history of conflict to existing patterns of marginalization. Yet, it’s also clear that climate change is a reality and is putting pressure on communities that are already struggling.

Jihadist groups will use any recruitment technique they have at hand. In Mali, they have realized that certain groups have been left to manage the devastating impact of climate change on their traditional livelihoods on their own and are filling the gap left by the state. While climate change has not created jihadists in Mali, its effects on the livelihoods of already marginalized communities has created fertile grounds for recruitment.

Colin Walch is a post-doctoral researcher at the University of California, Berkeley, and a lecturer at the Department of Peace and Conflict Research, Uppsala University.

Water conflict and cooperation surrounding riparian countries among the Jordan River has been one of the most contentious issues in the Middle East, at times...

Lawmakers from nations in the North Atlantic Treaty Organization are warning that climate change will lead to conflict and mass migration in the Middle East and...

Food Access and the Logic of Violence During Civil War

Global Water and National Security: Why the Time Is Now

While all Americans know water is a precious resource, most of us take it for granted – until it’s not there when we need it. Three authors from the Wilson...

"Land degradation is a root cause of migration and a trigger of conflicts", says Monique Barbut, Executive Secretary of the United Nations Convention to Combat...