Oil, Greed, and Grievances in the Middle East and North Africa

Between 1961 and the U.S. invasion of Iraq in 2003, Iraqi Kurdistan’s quest for independence has led to the violent death of an estimated 180,000 people. At least 12 independent political groups represent the Kurdish minority in the north of the country. These groups have pursued wildly different strategies to reach their goals, some orchestrating terrorist attacks or larger-scale violence, others choosing education and propaganda campaigns, the provision of social services to gain popular support, and demonstrations. 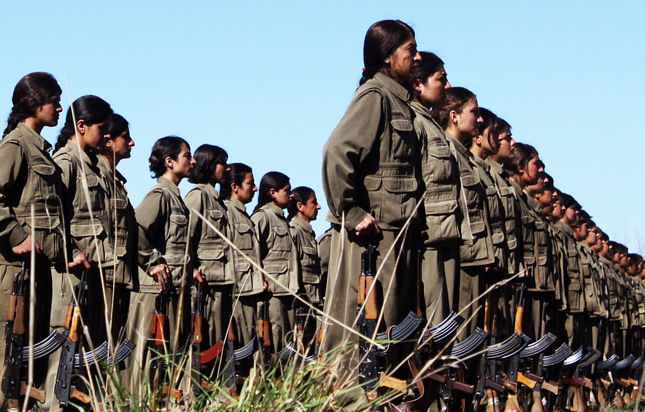 Between 1961 and the U.S. invasion of Iraq in 2003, Iraqi Kurdistan’s quest for independence has led to the violent death of an estimated 180,000 people. At least 12 independent political groups represent the Kurdish minority in the north of the country. These groups have pursued wildly different strategies to reach their goals, some orchestrating terrorist attacks or larger-scale violence, others choosing education and propaganda campaigns, the provision of social services to gain popular support, and demonstrations.

What do we know, broadly, about the motivations of these groups – why do some choose particular kinds of violence and others peace? Political scientists Indra de Soysa and Eric Neumayer, among many others, have shown that countries rich in oil have a higher risk of civil war – one aspect of the so-called “resource curse.” The circumstances that lead groups unhappy with the state to choose either a peaceful path, terror, or war are less well understood, however.

In a paper published in the Journal of Peace Research, we analyze the choices of political groups within a sub-set of countries in the Middle East and North Africa, shedding light on some nuances that have not yet been uncovered. We implement a statistical analysis for 118 political groups in 13 countries over the 1980 to 2004 period. On average, we find that economic factors (such as possible revenues from oil extraction) are important drivers of larger-scale conflict while politics tend to drive terrorism.

In the Middle East and North Africa, the abundance of oil has actually disadvantaged the local population in a number of countries. A steady stream of resource rents has provided little incentive for central governments to invest in other forms of economic development or to feel accountable to their citizens in the absence of a need for taxation. The extraction of oil (often by foreign firms) regularly leads to high regional unemployment and mass immigration as well as the reorganization of land rights and pollution in the affected regions. What is more, access to oil revenues offers the government opportunity to pay out selective benefits to allies.

We argue that oil-induced greed and grievances help determine whether or not political groups take up arms – but in different ways.

Specifically, we find that abundance of oil increases the likelihood that groups engage in large-scale conflict, arguably in an attempt to gain political control over the oil. We do not find oil per se to affect the likelihood of terror, though. We show that political relations between the central and regional authorities are crucial in determining splinter groups’ weapon of choice.

Groups in regions with autonomy from the central authority are more likely to fight for full independence through secessionist war if they expect the oil on their soil to fill the coffers of their aspiring state. Oil in autonomous regions thus increases the risk of larger-scale conflict relative to non-autonomous regions, as can be seen in Figure 1. In contrast, autonomy gives local governments the agency to resolve grievances caused by the extraction of natural resources. As a result, the oil-induced danger of terrorist attacks is lower in autonomous regions. 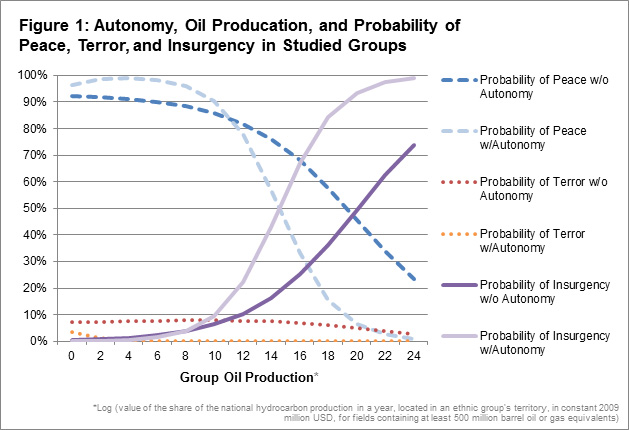 When we focus on the extent to which regional groups participate in national government decision-making rather than on the strength of the regional government, we find that the effect of oil on insurgencies decreases with participation. Groups with access to central power have political – and thus peaceful – means of getting some share of the revenues. They do not need to fight wars to alleviate their greed and grievances.

As one possible interpretation of our results, greed tends to dominate grievances and political institutions play an important role in mediating those. These results have important implications for a large number of countries around the world that face the challenge of dividing the revenue from resource riches among different ethnic and political groups. Central governments should carefully consider the degree of decentralization and regional autonomy they grant to oil-rich regions.

From the standpoint of avoiding conflict – making no judgement on the legitimacy of grievances – countries suffering from terror can benefit from granting oil-rich regions some autonomy, providing a local means to resolve grievances and incentives to maintain stability. Countries threatened by larger-scale insurgencies might want to consider giving regional groups some share in central government decision-making, but should carefully avoid granting them more wide-ranging regional autonomy or full control over oil revenues.

After decades of bloodshed in Iraq – including the Anfal genocide campaign against Kurds in the 1980s – Kurdistan was granted regional autonomy in 1991, with the 2005 Iraqi Constitution defining it as a federal entity. Applying our results from the average country, group, and year to Iraq, regional autonomy in tandem with oil-richness should have led to a lower risk of terror, but a larger risk of full-scale war. Iraqi Kurdistan earned $800 million a month from oil revenues in the second half of 2015, thus offering significant returns from oil extraction. And more can be expected if oil prices recover from their current low. At this stage, the analysis suggests Kurdish terrorism should not be a major problem in Iraq but a larger share for Kurdish groups in central power will reduce the risk of conflict in the longer run.

Axel Dreher is a professor of international and development politics at Heidelberg University, editor of ‘The Review of International Organizations,’ president of the European Public Choice Society, and author of the KOF Index of Globalization.

Merle Kreibaum is a researcher at the German Development Institute/Deutsches Institut für Entwicklungspolitik focusing on governance, statehood, and security.

The Gulf Cooperation Council’s grid operator is studying the feasibility of a cable to Ethiopia, which would run through currently war-torn Yemen.