Overlooked and Misunderstood: Stories About Climate, Conflict, and Migration

Barbuda—an island once full of people—has been rendered completely uninhabitable by Hurricane Irma. Every single resident was evacuated from the island, and some are not planning to return. Yet despite the magnitude of the problem, it is largely ignored in mainstream media coverage. 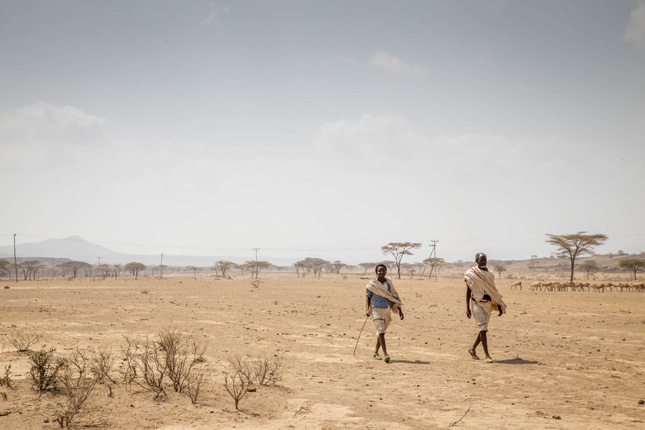 Barbuda—an island once full of people—has been rendered completely uninhabitable by Hurricane Irma. Every single resident was evacuated from the island, and some are not planning to return. Climate-induced migration and displacement is not usually this dramatic, but it is not uncommon: Since 2008, UNHCR estimates that an average 21.5 million people each year have been forcibly displaced by weather-related natural disasters, like floods, storms, and wildfires.

Yet despite the magnitude of the problem, it is largely ignored in mainstream media coverage.  Pioneering journalists at the upcoming Society of Environmental Journalists’ conference in Pittsburgh will share their experiences covering this overlooked crisis, along with an expert who can shed light on common misunderstandings about the complex relationship between climate, migration, and conflict.

There Are No “Climate Refugees”

There is an important distinction between displaced people and refugees

Climate change and its effects help fuel weather-related disasters, pushing people out of their homes—displacing them internally—or even across borders. These weather-related displacements contribute to our enormous, ongoing migration crisis: A staggering 65.6 million people worldwide are considered to be forcibly displaced, according to UNHCR, while 22.5 million people are recognized by the United Nations as having “refugee” status. But there is an important distinction between displaced people and refugees that is critical for all of us—including journalists—to understand.

Dubbing people who move for climate-related reasons “climate refugees” is tempting, but it is politically problematic and potentially unhelpful. “In order to achieve refugee status,” ECSP Senior Advisor Geoffrey Dabelko writes in New Security Beat, “people must be fleeing persecution or violence and must cross a national border. Countries are then obligated by international law to admit them, provide shelter, and so forth. The definition of ‘refugee’ is based on political boundaries and has nothing to offer internally displaced persons. It also does nothing for people who are ‘pulled’ for economic reasons or ‘pushed’ for environmental reasons.”

As the number of displaced people reaches unprecedented levels, heightened nationalist politics in Western countries has stymied the flow of resources and resettlement options. The Trump administration’s travel ban seeks to severely restrict the number of immigrants permitted into the United States, including internationally recognized refugees. Anti-immigrant sentiments helped a far-right party to gain seats in the German Parliament for the first time in 50 years, as the number of refugees streaming into Europe since 2015 have tested the continent’s tolerance.

Will Climate-Related Migration Lead to Conflict?

“There is relatively broad consensus that climate change will lead to more migration,” said Schuyler Null at the launch of a Wilson Center report for USAID’s Office of Conflict Management and Mitigation in 2016. “There is also relatively broad consensus that climate change should be considered a threat multiplier for conflict…not that it will necessarily create new conflicts out of thin air, but it will exacerbate existing tensions.

“There are still a lot of questions, however, on how, where, and to what degree these relationships play out,” he said.

“There are still a lot of questions, however, on how, where, and to what degree these relationships play out”

Migration has long been one method for adapting to environmental change and the economic and political hardships it causes. The many and complex drivers that push (or pull) people to migrate or cause them to engage in conflict do not lend themselves to easy answers. Journalists telling these stories and practitioners addressing these migration flows need to embrace and explore these complicated dynamics—which can be hard to do with the tight timeframes and decreasing budgets that plague both fields.

Media on the Move

In Pittsburgh, Dabelko will join Hannah Fairfield, the climate editor for The New York Times and Beth Murphy, a producer and filmmaker for The GroundTruth Project, for a discussion moderated by Ian James, the water and environment reporter for The Desert Sun.

Fairfield has ramped up climate change coverage for TheNew York Times since her tenure began in January 2017, overseeing stories on Mexico City’s fresh water crisis and rising sea levels in the southeast United States. As visual editor, she worked on the New York Times’ dynamic and ground-breaking series on climate migration, “Carbon’s Casualties,” including stories on China’s expanding deserts; a small Alaskan village considering moving to higher ground; and young men displaced by drought in an increasingly volatile West Africa.

The GroundTruth Project’s series, “Living Proof: The Human Toll of Climate Change” has uncovered new stories at the nexus of climate, conflict, and migration issues, particularly where it intersects with international humanitarian issues, such as climate-conflict links in Somalia;sex trafficking in the Philippines; and educating girls to cope with drought in Afghanistan.

For James, the issues of climate change and water scarcity have been central to his environment coverage at The Desert Sun, which is based in Palm Springs. James was a lead reporter in the 2014 APME award-winning series “Scorched Earth” and has written numerous stories on California’s multi-year drought. Most recently his coverage has focused on the politics surrounding California’s Salton Sea. For USA Today, James’ multimedia series “Pumped Dry” ranged as far as India, Peru, and Morocco.

The climate-security panel, “Climate Change, Conflicts and Displaced People,” will be held on Saturday, October 7 from 9:00-10:15 a.m.

Bethany N. Bella is a Bachelor of Specialized Studies (B.S.S.) senior studying geography, political science, and women’s studies at Ohio University. She has a background in journalism and writes for New Security Beat from the Energy & Environment team at the Voinovich School of Leadership & Public Affairs. Her research interests include food security, environmental justice, and indigenous land rights in the context of North America. Find her on Twitteror visit her website.

Climate change is already driving migration in the Brazilian Amazon

As resource pressures and climatic events wreak havoc in the Brazilian Amazon, traditional populations are being forced to move away from the places that define...

In some areas of the world, including Central America, rising sea levels and declining agricultural productivity due to climate change are expected to trigger...

Internal climate migrants are rapidly becoming the human face of climate change. According to this new World Bank report, without urgent global and national...

Climate Migration in Latin America: A Future ‘Flood of Refugees’ to the North?

Protecting the Sanctity of Indigenous Foods and Cultures