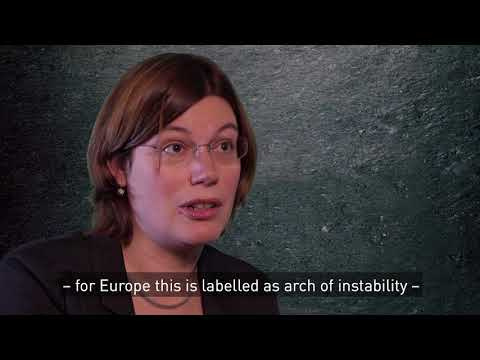 WATCH: How can the international community best use its resources to help stabilize livelihood systems and halt this upwards trend? Louise van Schaik, Senior Research Fellow at The Clingendael Institute, gives insights into this underexplored aspect of climate security.

Increasingly inconsistent climate patterns are pushing vulnerable populations to migrate both within and across borders. Spillover effects, such as terrorist recruitment and rapid ubanization, put a strain on global security.

"So I think it is really fascinating to look into, more into, this relationship between climate migration and security. Academically it is a challenge, because there is so many different and contested research findings. At the same time it is perhaps even a bigger challenge to now really see what is happening on the ground, what kind of projects we are really implementing, linking these issues, what could be done, what could be envisaged. What can we do in the field of land restauration, renewable energy, projects to increase energy access. And how can we by using, let’s say the climate funding, but also the migration funding, the security funding, in a more smart way, how can we really prevent let’s say these unfolding catastrophe, which is let’s say unfolding in Africa, maybe perhaps also in the MENA region.

So what we see in these parts of the world – for Europe this is labelled as arch of instability – we can really see an enormous increase of population, security issues super high and pressing, and also the EU really being concerned about another wave of migrants coming to Europe.

From the research we know that it is not so evident that all these people will seek Europe because of climate change. At the same time we have only a small fraction of the people who are living in these areas and who have not so much perspectives. Young people who lack the perspectives of jobs and who are not being able to live from the lands they live on. Because that is basically what is happening and climate change is also really influencing that – water availability, the food availability from the lands.

So if new conflicts, or new civil wars, or new terrorist groups gain from this, then also we know that Europe is going to suffer from it. So I think for Europe it is a political reality that even in the absence of direct evidence there is this need to look into root causes and to use let’s say the funding that is available to think about scaling up the funding."

UK Ministry of Defence: The Destabilising Consequences of Climate Change

Purgatory in Paradise: What Lampedusa Tells Us About Our Climate Future

WATCH: This UNSSC Coffee hour focused on the intersection of climate change and human mobility, conflict sensitivity and food security in the Karamoja Cluster...

This report represents findings from analysis of climate security risks in the Balkans using the Climate Security Risk Index (CSRI). Of the climate change...

Since the Russian invasion of Ukraine in February, food insecurity and food prices have become increasingly concerning. However, the focus has largely been on...

A Conceptual Model of Climate Change and Human Mobility Interactions

This Clingendael policy brief points out six wins for the EU when decarbonising the military. Currently the sector is largely omitted from European Green Deal...