This article portrays the link between the Iraqi farming communities limping from one debilitating crisis to another and the growing recruitment process of ISIS members who began to see a return on their investment when attracting support from water-deprived communities.

With every flood or bout of extreme heat or cold, the jihadists would reappear, often supplementing their sales pitches with gifts; they doled out food baskets; they distributed cash

The research conducted by Peter Schwartzstein investigates the links between the early signs of climate change and the rise of the Islamic State in Iraq. As extreme weather events appeared more frequently, Iraq’s  agricultural areas increasingly suffered degradation to the point where farmers could not harvest their fields anymore: “a particularly vicious drought struck in 2010, the fifth in seven years; fierce winds eviscerated hundreds of eggplant fields near Kirkuk in the spring of 2012”. The poor living conditions of the area, exacerbated by the effects of climate change, such as heavy floods and droughts, increased the despair of the area which made it possible for the Islamic State to settle, recruit and expand successfully: “with every flood or bout of extreme heat or cold, the jihadists would reappear, often supplementing their sales pitches with gifts; they doled out food baskets; they distributed cash”.

This article portrays the link between the Iraqi farming communities limping from one debilitating crisis to another and the growing recruitment process of ISIS members who began to see a return on their investment when attracting support from water-deprived communities. For this piece, Iraqi minister of water resources Al-Janabi was interviewed and admitted that  “The disappearance of our water and environment has been unstoppable in places” which falls into line with the fact that by 2011, much of the Iraqi countryside was in desperate financial straits. The links between climate change and security in Iraq remain under review, however “researchers say that summer temperatures in the Middle East are set to soar twice as fast as the global average, possibly threatening the inhabitability of the region by the end of the century”.

This article originally appeared in planetarysecurityinitiative.org. For more information about climate security and the links between climate change and ISIS’ terrorist recruiting in Iraq, visit Peter Schwartzstein’s official article on National Geographic. 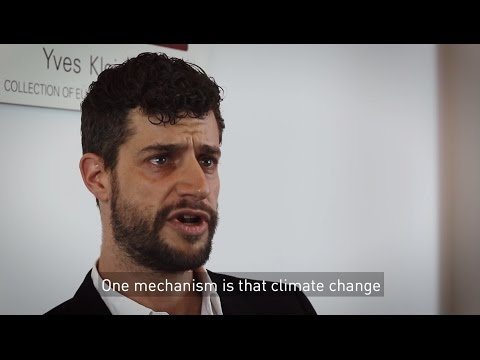 Climate change, water and future cooperation and development in the Euphrates-Tigris basin

The study focuses on three different risks that are affected through climate-related water challenges: (1) livelihoods and food security, (2) political...

Water insecurity in Jordan is on the rise as the country's limited natural water availability is further stressed by intensifying water use, climate change...

A Green Blue Deal for the Middle East

This report seeks to inform Israeli, Jordanian and Palestinian policy makers, and the understanding of international stakeholders, as they work to meet climate...

Iraq is on the verge of an environmental breakdown, and climate change is not helping. The country's fragile environment and the increasing scarcity of natural...

The UN Food and Agriculture Organization (FAO) and World Bank predict that water scarcity, induced by climate change, will potentially reduce GDP of the Middle...