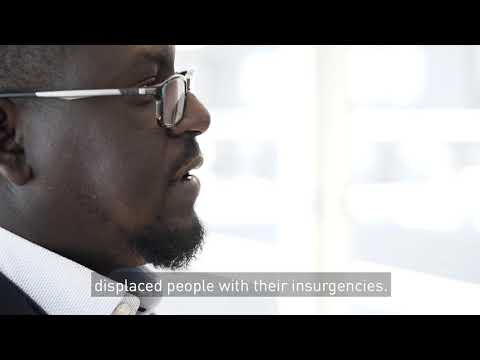 WATCH: In the last 50 years, the surface of Lake Chad shrank by 90%. Furthermore, Boko Haram terrorizes the local population. In this clip, Mamadou Diop, expert from Action Against Hunger, analyzes the complex challenges and the role of climate change.

"The situation of the Lake Chad basin remains very complicated. In the last 50 years, the lake’s surface shrank by 90%. Apart from this, Boko Haram’s insurgency has caused additional problems. The region occupied by Boko Haram is destabilized.The education system is completely destabilized, the health system completely collapsed. In fact, the health structures do not function anymore and neither do schools. Besides, we witness an expansion of Boko Haram’s insurgency in other countries of Lake Chad, beginning with Nigeria, then in 3 other countries at the level of Lake Chad, namely Niger, Cameroon and Chad.

In Borno State, in the north-east of Nigeria, in Difa in Niger, and in the Far North region of Cameroon, the groups disturb many displaced people with their insurgencies. We count almost 5 million people affected by food insecurity, 3 million displaced people and 50 thousand people facing starvation.

Climate change is one factor. Climate change is not the only cause for the Lake Chad situation. Today we know that the economic situation in the Lake Chad region has deteriorated, because the people living primarily from fishing, herding and agriculture had to abandon their lands and ended up in refugee camps. Today, it is the humanitarian community who takes up the task with the support of certain governments of course, they are conscious about the problems and are proposing solutions to liberate the occupied zones.

With regards to climate change, our intervention strategy consists in Early Warning Early Action. We developed tools, we put into place a bio-generator, a hydro-generator, that allows us to predict, within a very short time, let’s say six months, the regional pastoral situation, because we have the possibility to measure the biomass and to assess the state of the vegetation in that region. And we can establish mitigation solutions, for example set up food storages for livestock to allow herders to access them. Apart from this, we also intervene directly and provide aid to displaced people through food assistance, and caring about malnutrition and health, foremost mental health. And we are also engaged in water activities, hygiene and sanitation to allow displaced people to access water and sanitary systems."

Moving from Reaction to Action: Anticipating Vulnerability Hotspots in the Sahel

The Sahel faces mounting human security and development challenges due to the complex interplay of diverse and growing risks in the region, including climate...

Anticipating Trends in the Sahel: Summary for Policy Makers

The objective of this report is to support the UN Integrated Strategy for the Sahel (UNISS) in promoting data-driven and evidence-based approaches in the Sahel...

Cape Town is dealing with one of the biggest climate change-linked water crises to face a modern city. This should serve as our wake-up call: we must transition...

The UN Security Council has identified climate change as a driver of conflict across West Africa and the Sahel, in a statement published last Tuesday.

The Lake Chad crisis is becoming one of the worst humanitarian disasters since World War II, and climate change is considered one of the drivers. In the four...

Climate scientists from several international agencies were ending a three-day conference in Nairobi, releasing a detailed study of the Kenyan drought whose...

Insurance Against Disaster - Lessons Learned from the African Risk Capacity

With climate change likely intensifying the effects of this year's El Niño, many parts of the world are experiencing longer droughts, more frequent floods and...