Climate-induced migration in the Arab region – Interview with Hammou Laamrani 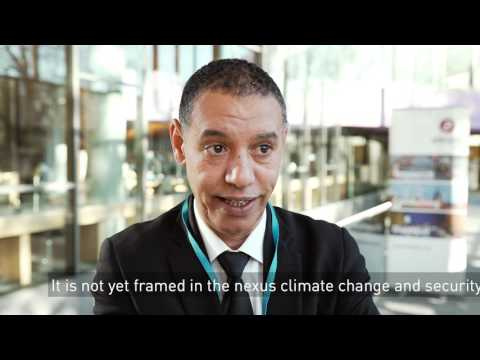 WATCH: Hammou Laamrani, long-standing field expert, and Advisor to the GIZ for 'Adaptation to Climate Change in the Water Sector in the MENA Region' emphasizes why climate change needs to be linked to human security.

The Arab region is an example of climate-security risks and climate-induced migration. Climate change can contribute to a cycle of fragility by affecting the availability of water, food, land, and other crucial resources. Scarcities and price spikes add to existing challenges that trigger conflicts and violence. To successfully implement development projects, one has to realize that climate is an issue of security, stability and prosperity.

"Actually, the Arab region is a lab example of impacts of climate change and environment change is impacting livelihoods: mass migration and conflicts. Implications not only on the Arab region but on peace and stability worldwide, this is a reality. The region is in a development impasse, by all means. Climate change is now surely going to be triggering and magnifying those existing risk factors for human security and for peace and security worldwide.

We have seen over the last few years, climate-induced migration internally and that has triggered conflict and civil wars. Those have in final impacts on migration beyond the borders – be it in the region or outside the region. I think we are witnessing today a first generation of climate impacts on livelihoods with implications on peace and stability in the region and beyond the region.

So far, in terms of policy, climate change is more of a development issues. It is not yet framed in the nexus climate change and security. We have not seen the same level of engagements to put climate change at the same level of the fight against terrorists for example which is a security issue. In that way, we have to work on awareness raising at the policy level but also at the practitioner’s level. We also need to bring together the regions and see what are the learning opportunities between the Arab region and other regions that are already ahead of us in linking climate change to security and stability.

The third element is that we need a new generation of competences and capacities that can move from the framing of the nexus “climate change and security” to implementation and do things on the ground – and do them with this perspective of: climate change is not only a development issue – it is also a security, stability and prosperity issue in the region."

Tussles over the role of climate change in the Syrian uprising

The Syrian crisis and the multi-year drought that preceded it have become emblematic of contemporary discussions about the possible security implications of...

Climate Change, Arab Spring and the Hashemite Kingdom of Jordan

Migrants and Syrian refugees have become the new 'stranded polar bear' of climate change imagery. But most such impacts will seldom be so dramatic or camera...

In Morocco, a Microcosm of What Leads Many to Leave Their Home Countries

Global attention is understandably focused on Syrian refugees, but the migration crisis in Europe is part of a bigger trend that climate and social scientists...