Conflict and insurgency in Lake Chad - Interview with Mohammed Bila 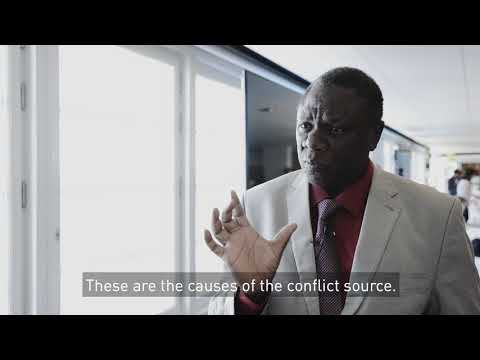 WATCH: The amount of water in Lake Chad (Nigeria, Niger, Chad and Cameroon) has decreased significantly. The drought that started in 1973 has affected millions of people. Mohammed Bila, expert from the Lake Chad Basin Commission, argues that climate change drives conflicts in the region, because it makes people vulnerable, forcing them to migrate. He highlights what needs to happen at the state and local level in order to create security and manage resources equitably.

But the main cause for all these conflicts, that has later become this big insurgency, is climate change. The drought that started 22-24 years ago, is what has affected the majority of the population in the Lake Chad basin. This is a drought that has drastically reduced the amount of water available in the Lake Chad basin, because there is decreasing rainfall, so there is decreasing flow into the lake. This has led to conflicts in water sharing between different users. But the main issue here is: how do we go from climate change to the conflicts we have now?

The explanation is within the context of vulnerability. You have to look at the Lake Chad in its own context. This is a region where there are climate change impacts. There is less water, there is drought. People, whose livelihood depends on this water, become vulnerable. So they move, in accordance with the seasonality: During the dry season they go out, they come towards the lake, because this is the only source of water. During the rainy season, they stay away from the Lake, because the rainfed area grasses.

This constant migration is a problem, but then, added to this, you have population growth. This is a region that experiences a population growth of 2.3%. So there is pressure on the little water that there is. This is putting pressure on people to move to where is water. This migration is bringing conflicts. There are weak institutions in those regions; unsustainable use of resources. These are the causes of conflict source.

How do we address it? We have to look at it at the level of the states. At the level of the states, we have to reduce fragility, because the Boko Haram conflict now is making most of the region fragile. We have to find a way so that every water user is assured that –even if there is a drought– there is going to be water. That confidence between the states, this cooperation, this is what the Lake Chad Basin [Commission] has been trying to do.

We still have to walk further; we have a water chatter, which determines how the member states share water. We have to reduce fragility within the member states. Where there is no government, the government has to be there, you have to put security into place. This is what has to be done at the state level. At the local level: dialogue between resource users, between different ethnic groups. We are trying to share the common resources, the common pool resources, equitably. This has to be done at the local level, and the Lake Chad Basin [Commission] has been doing it."

The war in Tigray is undermining its environmental recovery

Since the 1990s, Tigray, a region in Ethiopia, has been undergoing successful landscape restoration, helping provide food security and other ecosystem services...

How climate services can help mitigate crises and conflict

Extreme weather events such as droughts and floods are expected to become more severe under future climate conditions. This implies a concern for policymakers...