Experiences of a peacebuilder in Nigeria 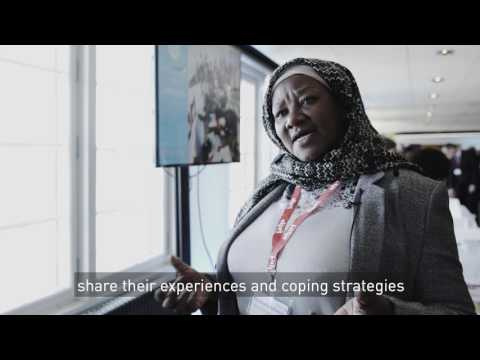 WATCH: In this interview, Hamsatu Allamin, now affiliated with the Nigeria Stability & Reconciliation Programme (NSRP), sheds light on the dramatic causes and consequences of extreme violence in her country.

Hamsatu Allamin is a native Kanuri, the Nigerian tribe where Boko Haram's insurgency started. She became a respected peacemaker, negotiating with terrorist groups, whilst at the same time creating safe spaces for women and girls.

The video was produced by Paul Müller-Hahl (Lichtbilder Filmproduktion) and directed by Stella Schaller (adelphi), with kind support by the Planetary Security Initiative and the German Federal Foreign Office.

"My name is Hamsatu Allamin. I am a conflict analyst and regional representative of a peacebuilding program in northeastern Nigeria. In fact, I was born and brought up there. I am a native Kanuri, the tribe where the current insurgency is associated with Boko Haram.

The northeastern part of Nigeria is the most underdeveloped part of the country. In fact, take all human development indicators, that region is the worst. Poverty, unemployment, desertification, illiteracy, name it. So we are not even surprised that when the insurgency started in Nigeria, it started in that part of the country, because of the neglect.

Take women for example. You can categorize women into the widows, women who have been abducted, women who are voluntarily married to the insurgents. There are different categories. Now they are coming back, pregnant with babies, and nobody wants to – in some cases – not even associate with them, even their family members. So what do you do with this kind of situation? So therefore we did the ritual that we can to organize safe spaces, so that we can bring these kinds of vulnerable people to sit down together, to share their experiences and coping strategies and then build their skills and then talk to their community to stop stigmatizing and despising them.

Another intervention I make is to try to address this issue of apathy to western education and the West, because nobody has done it before, while it is the root cause of our problem. Therefore I engage with Islamic scholars in two organizations, and to come together and then develop a small book. We call it a ‘Manual for Peacebuilding in Islamic Schools’. Islamic schools, because it is perceived that most of the insurgents recruit the ‘products’ of these schools. So that we, at the early stage, catch them to teach them that what we consider to be ‘western’ concept and ideas is in fact in accordance and goes in parallel with Islamic principles.

In fact, the challenges are enormous. The international community recognized that the humanitarian crisis in the Northeast is one of the worst disasters in human history. Children are dying from malnutrition. Up until today, Boko Haram is still abducting women and girls and then forceful recruiting is happening. It is just unfortunate, honestly. The impact they are making is not significant compared to the magnitude of the crisis and the situation."