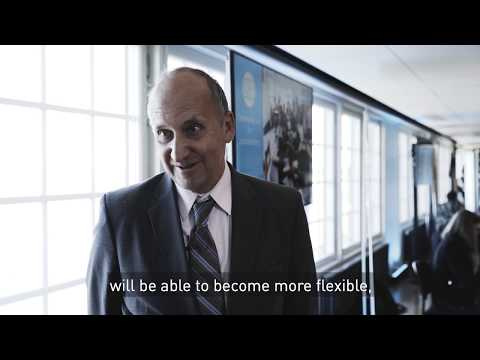 WATCH: Soon, the World Bank will publish a flagship report on the role of develoment in the prevention of violent conflicts, together with several UN organs such as DPKO, PBSO and others. In this interview, World Bank Chief Specialist for Fragility, Conflict and Violent Groups, Alexandre Marc, summarizes the findings and stresses that it is imperative to deal with the connections between conflict, climate and environment.

"We are preparing this report on prevention of violent conflict. It is a report that is prepared jointly by the World Bank and the UN. It is actually the first time that there is a joint team working on the report. It is all the sort of establishment in the UN working on peacebuilding, so it is DPKO [Department of Peacekeeping Operations], DPA [Department of Political Affairs], the UNDP, PBSO [Peacebuilding Support Office]. So it is a large endeavour. This report is a commitment of the World Bank to our funders. We had a record replenishment for IDA18, the fund we have for the poorest countries, and conflict issues are one of the main aspects of this funding and countries in conflict will receive now a substantive increase in the amount of funding. For the UN, it is really the response to all the different reviews that they have had recently on peacebuilding operations, peace architecture, women and security, and different activities they are engaged in now.

Climate change is one of the factors of stress, stress and conflict today. It has impacts in very different manners in different places as we know. Not all of them have as a consequence conflicts, but there are certain areas like the Sahelian region, Northern Africa, where there is a direct link between the intensification of conflicts in those area and climate change, in particular because you have big large movements of populations and especially of herders that are going into lands that are managed by agriculturalists. Large parts of the central African conflict for example is highly correlated with the increase in impacts of climate change.

The report itself is going to look at a lot of success stories, a country that was at high risk of conflicts 10-15 years ago and that has managed to avoid them. We are going to try to document what they did, what has been done right, what has been the role of the UN, other donors, and what seems to have worked. There is this general idea that prevention does not work at the moment and it is actually not true. It is because we don’t hear about the success story – the Indonesia, the Tunisia, the Niger, the Ghana – all those countries that had real risks but have managed to avoid big deflagration up to now.

For example, there is a very large project now, that is actually partly funded by the World Bank, in the Sahel in the North that looks at livestock development: There the adaptation to helping the farmers adapt themselves, continuing some of their transhumance traditional way of raising livestock but managing much better than it was done before the relation with agriculturalists, helping them to get into jobs that are compatible with also the activities of the population in the region where they are, helping them to move South, without having to move in areas where agriculturalists are settled. That is one example, but there are a number of other examples that people are starting to work on that try to deal with the connections between conflict and environment.

I hope that the international community will be able to become more flexible, less doctrinary, more adaptable, listening more to what seems to work or not work from their partners in–country and that we will be able to be less fragmented, more united, and more in the listening mode than we have been up to now."

The war in Tigray is undermining its environmental recovery

Since the 1990s, Tigray, a region in Ethiopia, has been undergoing successful landscape restoration, helping provide food security and other ecosystem services...

How climate services can help mitigate crises and conflict

Extreme weather events such as droughts and floods are expected to become more severe under future climate conditions. This implies a concern for policymakers...