Shoring up Stability in Niger

The new study Shoring up Stability demonstrates, for the first time, how climate change interacts with conflict and exacerbates the humanitarian crisis in the Lake Chad region. To launch the report and discuss its findings with local policy-makers, experts and practitioners, the German Embassy in Niger, adelphi and CNESS co-organised a launch event on 24 October in Niamey. Insights from Niger point to the importance of investing in governance rather than technical fixes.

The findings of the new adelphi-led climate fragility assessment indicate that military responses to the security crisis need to include more conflict- and climate-sensitive approaches if they are to win the hearts and minds of the population. Interventions that factor in important linkages between conflict dynamics and climate change represent the best value for money – and offer the best chance of delivering a lasting peace and sustainable development.

At the launch event, following a short presentation on the locally-led, two-year research project, a panel of study authors and local experts from government, civil society and international organisations discussed the merits of such an approach. Among them were the Secretary General of the Haute Autorité à la Consolidation de la Paix (HACP, High Authority for the Consolidation of Peace), Mr. Abdou, the Director of the Centre National d'Etudes Stratégiques et de Sécurité (CNESS), Colonel Magagi, and the contributing author of the new report, Mr. Oli Brown. They stressed that the causes of the instability in the region were very complex and contested and underscored how valuable holistic systematic conflict assessments and verified data were for untangling the roots of the crisis. Niger faces serious, embedded challenges regarding food and water security, job creation and providing stability in a fragile neighbourhood. Climate change impacts make it even more difficult to address these issues. "The United Nations Development Program (UNDP) and Germany are cooperating to support stabilisation efforts in the Lake Chad Basin, where climate change impacts threaten lives and livelihoods and where terrorism has become a major obstacle to the livelihoods of local populations,” highlighted the German ambassador in Niamey, Mr. Hermann Nicolai. 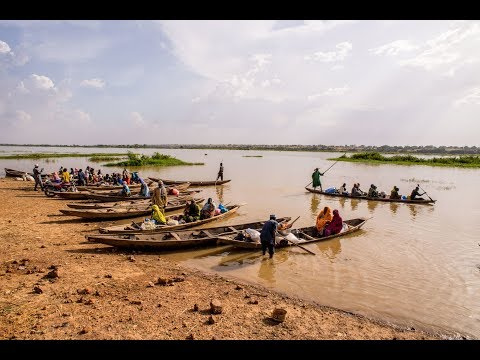 Two of the entry points to address the crisis identified in the study, and universally endorsed at the event, were governance and social cohesion: in particular, working on service provision and reviving the social contract. Only if the state is able to respond to people’s needs and hear their grievances can true peace emerge. As one participant poignantly said, „we do not need to rehabilitate Lake Chad, we need to rehabilitate the state. We need to address unemployment, poverty, and the provision of security.” It was seen as especially important to properly apply the law and strengthen local dispute resolution mechanisms. In the case of conflicts over resources, particularly recurring ones between farmer and herder groups, transhumance routes do already exist, but they need to be applied and enforced. Unfortunately, traditional methods of conflict resolution have become less effective after years of conflict. While modern court systems have partially supplanted these, the application of the rule of law could be improved.

There was a consensus that in order to create mutual trust within communities and between communities and the state stabilisation efforts must also seek to improve communication – e.g. provide space to air grievances, and increase access to information - from weather and market price information to advanced notice about planned military blockades.

In short, solutions to the multi-layered crisis should focus as much on the socioeconomic and cultural factors that lie at the heart of durable peace as on a security and judicial response to organized crime and the terrorist threat. The HACP provides a good example of such an approach. Its work – supporting reconciliation and dialogues in Niger and strengthening civil society engagement – could potentially be replicated and scaled up in the rest of the region. Other participants highlighted that there are already many community level interventions that address conflict and climate challenges at the same time, such as community management schemes for water resources. These need to be pursued and expanded.

The event showed that both the Regional Stabilization Strategy (RSS) and UNDP’s German-supported Regional Stabilization Facility for Lake Chad are perceived as well-conceived and important. But in order to truly succeed, implementation programmes and efforts need to take into account the links and entry points touched upon in the new assessment.

Weathering Risk’s Climate Risk Profile: Somalia provides policymakers and practitioners in the field with an overview of projected climate parameters and...

Southern Africa is famous for its rich nature and biosphere, diverse and vibrant cultures, and world-renowned natural sites. However, the region is also...