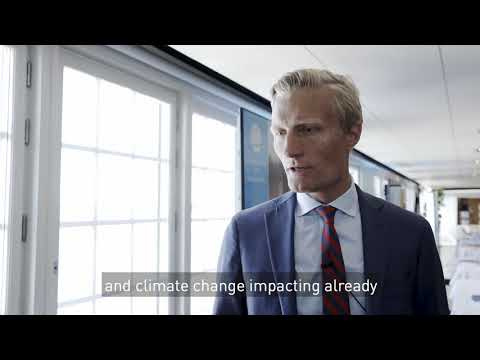 WATCH: In April 2017, the UN Security Council sent a mission to the Lake Chad region, where the largest humanitarian crisis is currently playing out. Carl Skau, Ambassador and UN Security Council Coordinator from Sweden, went on that mission and tells us what he saw in Nigeria and Chad, and what struck him most.

It is imperative to now follow-up on that visit, and firmly establish climate security risks in the Council's work.

"When Sweden was the President of the Security Council in January, we actually brought together a meeting on the Lake Chad region for the first time. One other result from the meeting was the Council going on the trip in early March. I joined that trip. It was a trip of [Permanent Representatives] on the Council, the 15 members. We went to Chad, to Cameroon, to Niger and to Nigeria. We met with the presidents, but also with civil society, affected people at this place, the refugees - not least women’s groups among the affected population. I think we were struck. I mean we had a pretty thorough briefing before going and we had a meeting in January as such, but I think we were all struck by the seriousness of the situation but also the complexity. This is a region that has been marginalized for many years and there is severe underdevelopment, possibly one of the most underdeveloped pockets in the world in terms of underdevelopment. And then, on top of that, you have the environmental degradation over the years, where the Lake Chad has disappeared by 90% only since the 70s. Of course, this is then causing an environment which is ripe for extremism with a lot of young unemployed people who can be receptive to these extreme ideas.

What you have really is a situation where you have environmental degradation and climate change impacting already very poor area with a large sense of marginalization from the center, and then with elements of extremism. Of course, our hope is that this will not be only for Lake Chad but that this something we can be doing for all the relevant regions, but also the Council will increasingly be ready to respond to those risks as they occur earlier on, rather before conflicts evolve, as a matter of prevention. It is important now that the Security Council follows up on its visit but also the resolution that acknowledges the link between security and climate change. The more immediate measure is to strengthen the capacity in the Secretariat around the Secretary General to assess climate-related risks but also to suggest how those risks can be managed earlier on, before conflict erupts, as a matter of prevention.

When you speak about Lake Chad region, it is important to remember that you need a regional approach. As well as you need a holistic approach - in terms of how development and security and all come together - you also really need a regional approach. In some of these areas, they have more in common with the local people on the other side of the border than they do with their own capitals. Often, the capital - at least in Cameroon, in Nigeria and Niger - is very far away and the local people speak the same language across the border. It is quite artificial sometimes. That is something we also need to relate to as we support the region and that we manage to really have a regional approach."

Pastoralism and Conflict: Tools for Prevention and Response in the Sudano-Sahel