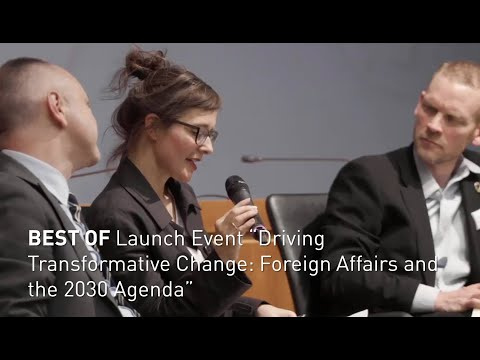 WATCH: During a panel discussion at the German Federal Foreign Office, experts discussed the role of foreign policy in the global sustainability architecture, as well as fields of engagement and tools of a new "Diplomacy for Sustainability." In this video, we have put together some of the event’s best moments and key statements.

The implementation of the 2030 Agenda for Sustainable Development can contribute to conflict prevention and promote global stability, and foreign policy has a critical role to play.

Voiceover:“The Sustainable Development Goals – the SDGs – are key to achieving global peace and stability. This means they are extremely important for foreign policy. But how can diplomats contribute to implementing them? The German Federal Foreign Office and adelphi are developing new answers to this question and organised a conference in Berlin to identify entry points for foreign and security policy to engage with the SDGs.”

Susanne Baumann, Head of the Directorate-General for International Order, the United Nations and Arms Control at the Federal Foreign Office: “It is not a given that we will achieve the SDGs in the 10 years that are left. That is why we want to step up our efforts to implement this agenda now. The 2030 Agenda addresses interlinkages between the SDGs. A sustainable foreign policy therefore needs to reach out to other policy areas and arenas.“

Oli Brown, Associate Fellow, Energy, Environment and Resources Department, Chatham House: “The SDGs don't have any kind of binding mechanism. They're held together by hope, by trust, by soft power and foreign policy can really help to articulate why countries should work together to achieve these goals.”

David Steven, Senior Fellow and Associate Director at the Center on International Cooperation, New York University: “Foreign Policy has a critical role to play. We've traditionally seen the MDGs [Millennium Development Goals] as a development agenda but the SDGs are much more political. They rely on very different relationships between countries. There's a role for rich countries, for middle income countries, poor countries – so we really need diplomats to be the operating system to wire together countries to be effective.”

Voiceover: “One of the tasks of foreign policy is to ensure that international agreements such as the SDGs and Paris Agreement are aligned with national development strategies. In Germany, the Chancellery is the central coordinator to SDG implementation, but the Foreign Office plays an integral role in linking the international and national dimensions. Diplomats can also build trust in times of rising nationalism.”

Fatima Denton, Director, UNU Institute for Natural Resources in Africa (UNU-INRA): “Many problems that we would want to address are problems to be better solved by multilateralism. But it is also the same multilateralism that is under threat.”

Verónica Tomei, Project Manager, German Council for Sustainable Development: “I think one of the most noble functions of diplomacy is trustbuilding. And there is nothing less that we would need than trustbuilding in these changing times.”

David Steven, Senior Fellow and Associate Director at the Center on International Cooperation, New York University: “One of the most important things for diplomats to do is to keep us safe is to build a safe world and they've never had a quantified target for violence reduction before. So I think there is an opportunity now for foreign affairs departments from around the world to work together to get serious about SDG 16.1 and to try and halve global violence. We halved global poverty under the MDGs [Millennium Development Goals]. Can we halve global violence under the SDGs?”

Voiceover: “Foreign policy is well-positioned to take a more pro-active role to support the achievement of the SDGs. Diplomats can bring different stakeholders together, provide political resolve, and cultivate the hope that is needed to push the 2030 Agenda forward.”

Access the summary of the launch event here and download the volume "Driving Transformative Change: Foreign Affairs and the 2030 Agenda".

If you will be in New York for the HLPF you are welcome to participate in the side event on sustainable foreign policy on 9 July . Register until 5 July 2019.

Complexity and uncertainty are the new normal: COVID-19, climate change & conflict prove it

As political and public narratives on COVID-19 shift towards the need to ‘build back better’, the pandemic continues to take a heavy toll for many. A new report...

The Geopolitics of Decarbonisation – A Report to Guide EU Foreign Policy

With the European Green Deal, the European Commission under President Ursula von der Leyen has committed to accelerating decarbonisation in Europe as a major...

Under the Paris Agreement, governments have committed to radically cutting carbon and other greenhouse gas emissions over the coming decades. This...

The oil market’s got Covid-19: fossil fuel phase out in fast-forward?

Decarbonisation won’t come as fast as the pandemic. But if fossil fuel exporters are not prepared for it, they will face an enduring crisis. The EU can help.

"Building back better," not COVID-19, is a silver lining for the climate

Greenhouse gas emissions are down and air quality has gone up, as governments react to the COVID-19 pandemic. However, the head of the UN Environment Programme...

Give Me Five! – Key Blocks to Guide a European Green Deal for EU Foreign Policy on the Geopolitics of Decarbonisation

Based on the findings from the report "Geopolitics of Decarbonisation" this policy brief focuses on six fossil-fuel exporting countries – Azerbaijan, Canada...

Geopolitics of Decarbonisation: Towards an Analytical Framework

An increasing number of scholars and analysts point out that the necessary decarbonisation of the global economy will impact international affairs and...

Foreign policy has the tools to take the SDGs forward – Interview with Oli Brown, Chatham House

WATCH: The Sustainable Development Goals (SDGs) are not supported by any binding mechanism; their implementation depends solely on political will and interstate...

Fragile Planet - The Politics and Economics of the Low-Carbon Transition

The 2015 Paris Agreement has focused global attention on the need for countries to address climate change risks. But not all countries are equal, in terms of...