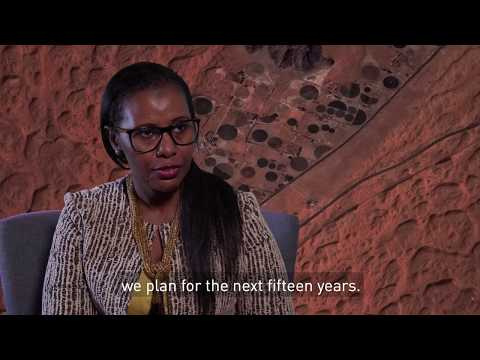 WATCH: It cannot be overstated how valuable regional cooperation is for tackling the security dimensions of climate change. Ayan Mahamoud, Platform Coordinator for Regional Programming for the IDDRSI, shares how the programme's resilience building efforts are looking into the causes of resource-related conflicts in the Horn of Africa in order to develop a conflict-sensitive approach to the region's climatic challenges.

“Our role as IGAD is to bring countries together, so that they are able to tackle together, issues of climate change, of migration, of resilience building, issues of common security threats. These are eight countries that share a common destiny, they do share a common vision, they also very much entrust IGAD secretariat to hold their principal when negotiating on their behalf with fellow countries, fellow institutional financial organisations and so forth.

When it comes to the IGAD resilience agenda it is called IDDRSI. IDDRSI stands for the IGAD Drought Disaster Resilience Sustainability Initiative. It started after the major drought of 2010, 2011 and again IGAD has been entrusted with the role of leading and coordinating the resilience agenda. Within that mandate we brought all the countries together and we aim to develop a strategic framework – align with the main strategy, along seven priority intervention areas.

So mainstreaming climate change and conflict and addressing the root causes of conflict, which is for us linked to climate change, is a key mandate that we got. And in that sense, within the IDDRSI strategy we plan for the next fifteen years. It started in January 2013, so we hope by 2027, God willing, we have at least achieved our goal of building the resilience for our community.”

This study explores the interaction(s) between climate change, displacement and urbanisation. The objective is to answer a dual question, in the context of the...

The Vulnerable Twenty – From Climate Risks to Adaptation

The so-called Vulnerable Twenty (V20) Group was established in October 2015 with the inaugural meeting of the V20 Ministers of Finance at the Climate Vulnerable...

WATCH: In this video, UN Environment shows how communities in Darfur are at the heart of defining key resource issues and development priorities.

As the Sahel becomes Sahara

What happens when habitable land is lost? What can be done to alleviate the consequences? Fred Carver, Head of Policy at UNA-UK, speaks of droughts...

The war in Darfur, Sudan, is frequently cited as a classic example of a 'climate conflict’. In North Darfur, a project of UN Environment and its partners has...

As the Global Platform on Disaster Risk Reduction soon gets underway, the world is witnessing the highest levels of famine risk in decades. While war and...

Food Security in a Changing Climate: Priorities for the G20

Without concerted efforts to help small-scale farmers raise productivity and adapt to climate change, the G20 will not come close to attaining its goal of...

Climate scientists from several international agencies were ending a three-day conference in Nairobi, releasing a detailed study of the Kenyan drought whose...