Over the past decade, the number of undernourished people around the world has declined by around 167 million, to just under 800 million people. However, this positive trend glosses over a stark reality: Food insecurity is increasing in the world’s mountains. This pattern has been under-recognized by development experts and governments, a dangerous oversight with far-reaching social and environmental repercussions.

Over the past decade, the number of undernourished people around the world has declined by around 167 million, to just under 800 million people. However, this positive trend glosses over a stark reality: Food insecurity is increasing in the world’s mountains. This pattern has been under-recognized by development experts and governments, a dangerous oversight with far-reaching social and environmental repercussions.

Thomas Hofer, coordinator of the United Nation’s Mountain Partnership, recently presented findings on the vulnerability of mountain people to permanent representatives and key stakeholders at the UN in New York City. The statistics were stark and the audience somber.

As of 2012, the most recent year for which a full dataset was available, an estimated 329 million people living in mountainous regions of developing countries – including nearly half the rural population – were vulnerable to food insecurity. These mountain people “lacked secure access to sufficient amounts of safe and nutritious food for normal growth and development and an active and healthy life.” The UN Food and Agriculture Organization further found that the number of hungry mountain people had increased by 30 percent over the previous 12 years.

Hunger in mountain areas has increased

While food security in the rest of the world has generally been improving, it’s been getting worse in the mountains.

Putting this into context, the world’s mountains are home to about 13 percent of humanity and cover some 22 percent of Earth’s land area, yet in 2012 they contained nearly 40 percent of the world’s food-insecure people.

The trend is worse still because the report almost certainly underestimates the problem. FAO’s threshold for classifying a population as vulnerable to food insecurity was a daily consumption of less than 1,370 calories and 14 grams of protein per person. This is a minimum survival requirement, barely enough to sustain someone in a warm, lowland climate. Any trekker knows that many more calories are required to keep energetic and warm in high and cold lands. At an altitude of 10,000 feet, a hard working farmer or pastoralist could easily require more than 3,000 calories a day.

Moreover, globalization, development assistance, and food aid are in some cases moving communities from traditional diets, rich in whole grains and other nutritious local foods, to lower-protein processed cereals and less nutritious diets generally. This is not unique to mountains, but can have serious impacts for people already on the edge of hunger.

The impact of poor diets cascades through mountain societies to reduce productivity, affect health – especially of children – and limit capacity to adapt to a fast-changing world.

Why Is Food Insecurity Increasing in Mountains?

There are many interrelated factors behind this troubling trend:

Growing populations. Human numbers in mountains in developing countries increased about 16 percent between 2000 and 2012, straining natural resources and the productive capacity of highland ecosystems in some places. Population pressures on mountain ecosystems will likely increase as climate change advances and people move upland to escape heat and drought. This is already happening in parts of Africa and Asia.

Youth exodus. While populations may be increasing overall, there is a massive out-migration of young people seeking a better life from rural mountain areas to urban centers or abroad, particularly men. This type of migration leaves fewer strong workers to cultivate food crops, care for livestock, and generate income in other ways. We already know this is placing an extra burden on the women, children, and elderly who are left behind. 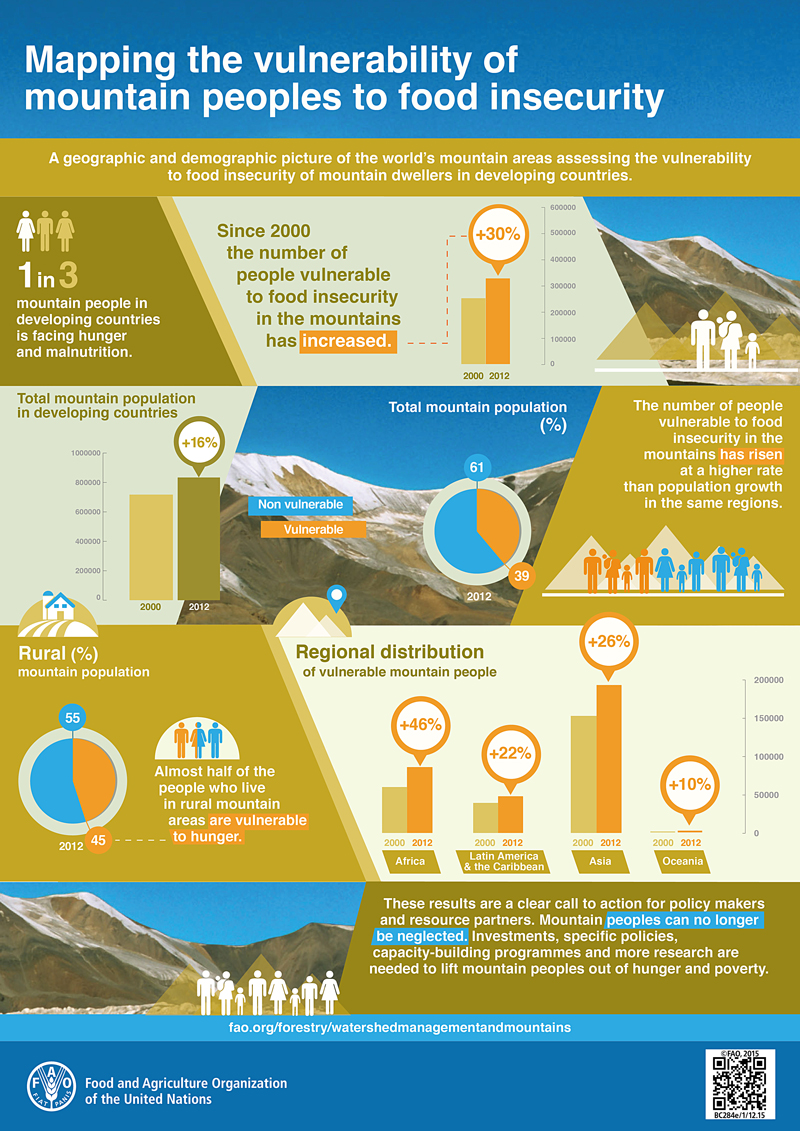 Chronic invisibility. Throughout the developing world, mountain communities are underserved by governments and other providers of social services. Many are ethnic minorities with little political influence located in remote areas. Meanwhile, mountain-relevant policies are typically set by and for the benefit of more powerful lowland interests.

From the private sector, investment in mountains tends to focus on natural resource extraction, from mining to timber and hydropower. Where governance is weak and non-inclusive, such enterprises may provide few benefits to local people and often trample on their rights.

Environmental change. Many mountain environments are severely degraded ecologically. This, in turn, hampers the ability of mountain peoples to produce food and prosper, let alone protect the biodiversity and essential ecosystems services upon which they rely.

We know that rural mountain communities are among the most hard-hit by climate change – via effects like increased temperatures, fluctuations in precipitation, and changes to glaciers and snow pack – and among the most vulnerable to natural disasters. Is it any wonder that food production is under stress?

Neglect by the development community. Rough mountain terrain, isolation, and low population density lead some to assume that development assistance is too expensive for too few beneficiaries. This thinking does not consider the co-benefits for lowlanders. More than half of humanity relies on freshwater that flows from mountain regions. There is therefore a clear incentive to ensure mountain ecosystems are well managed in order to secure the sustainable development of both highland and lowland people, agriculture and industry.

Moreover, The Mountain Institute and other groups have found cost-effective ways to build highland prosperity through unique and high-value products and services. These sustainable livelihoods projects include cultivating medicinal and aromatic plants and developing ecotourism, some with quite favorable returns on investment.

Why Should You Care?

The Sustainable Development Goals (SDGs), the successors to the Millennium Development Goals that guided development investments for the last 15 years, were developed under the principle that no one should be left behind. Mountain people are clearly one of those groups that have been neglected and need more attention from the global community. We should care about their fate for humanitarian reasons, for the intrinsic values of their ancient cultures and knowledge, but there are also self-serving arguments.

Water may be the most powerful. All of the world’s major rivers begin in mountains. Globally, about 17 percent of mountain lands are within protected areas, a common strategy to protect headwaters. However, much of the remaining 83 percent of the mountain land area is unprotected. Furthermore, these regions harbor an enormous stock of species and unique ecosystems. Twenty-five of the world’s 34 terrestrial biodiversity hotspots are in mountains.

There are self-serving reasons

To sustain the water sources upon which billions rely, and other invaluable natural assets, it is imperative that mountain environments are well managed by local communities. The stewardship of these residents affects us all. But how much can we expect from malnourished, hungry people in terms of protecting these natural assets?

If food insecurity in mountains continues – indeed, continues getting worse – while climate change pushes populations upward out of the lowlands, the result will be more and more pressure on already diminished natural systems. This, in turn, makes it harder for local communities to protect the fragile mountain environments upon which so many depend.

There is also a security argument. In addition to being home to millions of poor and hungry people – often hailing from marginalized ethnic minorities – mountains are frequently at the nexus of international borderlands and valuable natural resources.

A high proportion of the world’s internal conflicts and wars are associated with mountainous regions. Think Afghanistan, Pakistan, Kashmir, Tibet, Sinkiang, the Caucasus, the Balkans, Yemen, Rwanda, Mexico, Colombia. Many recent social conflicts in the Andes are related to access and control over mountain water involving rural communities and mining companies. One of this year’s Goldman prizes for environmental activism went to a highland recipient in Peru.

During negotiations in 2015 to finalize the SDGs, efforts were unsuccessful to include a specific mountain target for SDG 2 – to end hunger, achieve food security, improve nutrition, and promote sustainable agriculture. Had FAO’s vulnerability study been available, perhaps the results would have been different.

When Hofer presented the report in New York in May, there was a call for consideration of mountain issues across the SDGs. At present, mountains are specifically mentioned in only two. In my view, without broader attention to mountain needs and context, many of the SDGs will not be met by 2030.

We have seen growing attention in sustainable development circles to social and gender equity. Perhaps now it is time to add mountain equity to the equation to bring focused attention to the needs of marginalized communities and environments at higher altitudes.

At the very least, when considering investment, capacity building, policy, and research for sustainable development at national and global levels, mountains must be addressed separately and specifically to ensure adequate coverage.

Without such attention, mountain communities will continue to harbor poverty and hunger amid ever-worsening conditions. Mountain people and environments are clearly at risk of being left behind with grave costs for everyone.

Andrew Taber is the executive director of The Mountain Institute where he oversees programs to improve community livelihoods, protect local cultures, and conserve biodiversity and ecosystems services in fragile mountain regions worldwide. He is also chair of the steering committee of the Mountain Partnership, a voluntary alliance of governments and organizations working to advance sustainable mountain development around the world.

Food Security in a Changing Climate: Priorities for the G20

Without concerted efforts to help small-scale farmers raise productivity and adapt to climate change, the G20 will not come close to attaining its goal of...

Protecting farmers from climate impacts must become a priority

According to a new report from the Food and Agriculture Organization of the United Nations (FAO), between 2005 and 2015 natural disasters cost the agricultural...

Identifying the effect of climate variability on communal conflict through randomization

With climate change likely intensifying the effects of this year's El Niño, many parts of the world are experiencing longer droughts, more frequent floods and...

The Brown to Green Report 2019 is the world’s most comprehensive review of G20 climate action. It provides concise and comparable information on G20 country...