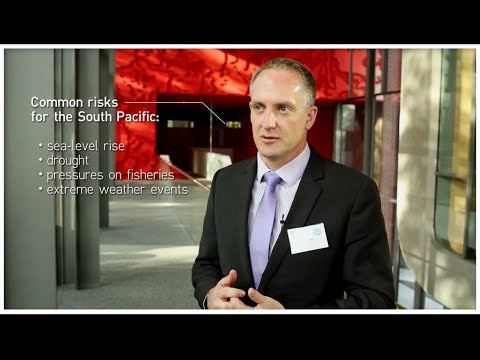 WATCH: In this interview, Dr. Jon Barnett points out key climate risks in the South Pacific and elaborates on factors that facilitate or hinder adaptation in the region.

Dr. Jon Barnett is Professor and Australian Research Council Future Fellow in the School of Geography at Melbourne University.

This interview has been conducted at the Planetary Security Conference in The Hague, 2-3 November 2015. http://www.planetarysecurity.nl/

"The issue of the South Pacific is that there is quite a diversity of countries but there are some common risks across all of them. Sea-level rise is a significant concern for most countries. Although that depends: some countries are entirely low-lying and so sea-level rise is a significant concern for them, others have more land and mountainous areas and so there is an ability to cope with sea-level rise, at least to a certain degree. I think that's a well understood risk and that's not going away.

There are other risks that we're seeing in the South Pacific. Certainly drought – particularly more in the Western Pacific – is becoming a bigger and bigger problem. This year we will be going into an el Niño. There are already reports of food shortages in Papua New Guinea. There are millions of people at risk there. That's a significant humanitarian problem and we're going to see more issues like that into the future in the absence of any other forms of development to manage those risks. Significant concerns are in fisheries. In some countries – particular the smaller countries – fishing is a major source of protein and a major source of healthy protein for many communities. About half of the fish consumption comes from reef-based fisheries, about half comes from ocean-based fisheries. We are seeing increasing pressure on coral reefs because of sea surface temperature warming, coral bleaching and ocean acidification lay impact upon the supply of reef-based fishing and that is actually very often forms of food that is procured by women and so the declining productivity from reef-based fisheries can translate through into problems about power dynamics in households between men and women.

Concerning pelagic fisheries, principally tuna, we are beginning to understand that the migration patterns of those fish might change as the oceans warm. They may move out of range of some local fishermen and they also might change the ability of Pacific Island countries to capture a rent on fishing within the exclusive economic zones and so that's going to have multiple effects both in terms of household food consumption but also in terms of economic development for many of these countries as well.

Then finally we are anticipating increasing damage from extreme events, from storms, surges and cyclones in particular, flooding in some cases. And this might put significant stress on urban infrastructure and water resource infrastructure in particular. One of the other things to consider here – and this is particularly true more on the Western Pacific – is social economic development trends. It's quite clear that there's going to be significant population growth particularly in Melanesia. That growth is going to be concentrated in cities and those cities are going to be coastal cities. So at the same time as we are seeing changing coastal dynamics and increasing risk on the coast, we're going to see more and more people living in urban areas in the coastal zone and that would seem to be a convergence of trends that will amplify risk into the future.

So for those and many other islands, the small island states consider climate changes as perhaps the principal security problem, particularly the very small small-island states Tuvalu, Kiribati and Marshall Islands. And they expressed that concern frequently to the United Nations system, through the Security Council, through the General Assembly, through the Framework Convention on Climate Change. I think we already see that this is probably the principal source of tension between the small islands states and its region’s larger countries like Australia and New Zealand. I think this is the primary issue in international relations. The response of Australia and New Zealand and the United States to this issue of climate change and small island states will define their profiles in the international system. I think we're going to see that thirty to forty small island states and fifteen to twenty Pacific Island countries consistently and repeatedly stress the failure of the more developed countries to assist with this problem. I think that's going to be very damaging to the international reputation and standing of countries like Australia.

I think we're seeing very good progress in community-based adaptation, insofar as its been trialed that seems to work out quite well and it fits very well with the logic of particularly outside of cities. Community-based living, collective forms of organization around customary property resources and community-based adaptation harness that logic and decision-making and that kind of ownership of resources very well. It's very cheap and it's very effective and it nudges decision-making at the local level into more sustainable forms through water resource management, coastal management and so on. The issue there is the extent to which that can be scaled up, to be replicated across other communities in the pacific and it doesn’t necessarily address the problems I talked about earlier but I think that's very positive and it's cost effective. The constraint there is a human resource constraint: having not enough people to do this work with local communities. That's a training issue more than the funding issue.

At least one challenge here however is that the politics of saying “climate change is the responsibility of the international community to help the small island states” is not a basis for shared action to solve this problem in the small Pacific Islands countries. The local Pacific Island governments need to be more strategic and systematically controlling this agenda in developing the adaptation process, in getting the international community behind their local adaptation plans in a way that small island states are in charge of this and it's a shared responsibility in a cooperative approach so I think shifting that narrative to bring solutions, focused strategic response adaptation driven by small island states is going to be an important reason to move forward and so."

WATCH: This workshop offers a glimpse at efforts to build community resilience to climate change and conflict in the Pacific region. Particular attention is...

WATCH: Foreign ministers from small and big countries can learn a lot from one another by exchanging knowledge and experience. Palau’s Foreign Minister Faustina...

“Our nation is dependent on the elements of nature” – Foreign Minister Abdulla Shahid, Maldives

WATCH: Abdulla Shahid, Minister for Foreign Affairs for the Republic of Maldives, speaks of the existential threat that climate change poses to small islands...

The Vulnerable Twenty – From Climate Risks to Adaptation

The so-called Vulnerable Twenty (V20) Group was established in October 2015 with the inaugural meeting of the V20 Ministers of Finance at the Climate Vulnerable...

Small Island States will be facing dramatically higher adaptation costs to build resilience against the kind of impacts the IPCC projects in its most recent...

Trump Has Sent a Healing Shock Wave - Perspectives From Fiji

The island state of Fiji is hosting the presidency of the next United Nations climate conference. Inia Seruiratu, Minister of Agriculture, explains why the exit...

Australia should lead, not sleep walk, on climate security in the Indo-Pacific

Internationally, Australia resides in the region worst affected by climate change, a so called ‘disaster alley’. Robert Sturrock from the Centre of Policy...

Some observations from the 5th Asia-Pacific Climate Change Adaptation Forum

Last month, our author Dr Vigya Sharma visited Colombo to speak at the 5th Asia-Pacific Climate Change Adaptation Forum. In her report, she highlights some...