War in Ukraine lengthens list of violent acts over water

The destruction of a dam across the North Crimean Canal is the most recent entry in the Water Conflict Chronology, a compendium of violent acts related to water throughout 4,500 years of history. The 376 new entries added in March 2022, most of which occurred in the last three years, reveal the geographic and political dimensions of water-related violence in an era of social turmoil and ecological upheaval. They range from local disputes to longstanding regional and international flashpoints.

One of the first casualties of Russia’s invasion of Ukraine was not a human life.

In late February, as Vladimir Putin’s war machine was beginning to uncoil, Russian forces destroyed a dam in Ukraine that was blocking water from a Soviet-era canal that flows into Crimea, the peninsula that Russia wrested from its neighbor in 2014. Ukrainians had erected the dam in retaliation for the loss of territory nearly eight years ago.

The destruction of the dam across the North Crimean Canal is the most recent entry in the Water Conflict Chronology, a compendium of violent acts related to water throughout 4,500 years of history. The database is maintained by the Pacific Institute, a water policy think tank.

In a March 2022 update to the chronology, the Pacific Institute is adding 376 entries, most of which occurred in the last three years.

The newly added incidents reveal the geographic and political dimensions of water-related violence in an era of social turmoil and ecological upheaval. They range in scale from distinctly local disputes to longstanding regional and international flashpoints. In the last year:

Peter Gleick, president emeritus and senior fellow at the Pacific Institute, helped compile the chronology. He told Circle of Blue that an array of environmental, social, and political forces are contributing to the rise in water-related violence. Droughts in farm regions have put pressure on farmers, whose livelihoods depend on water for their crops. Meanwhile, the absence of basic services can aggravate existing tensions. 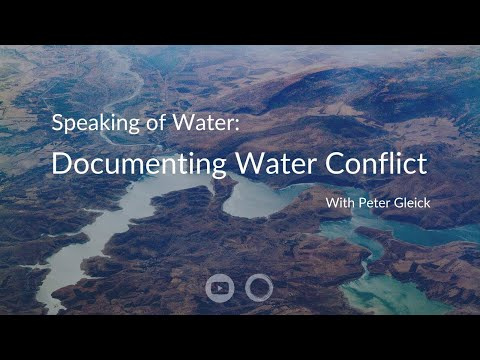 Despite the pressures from a changing climate, do not ignore the role of politics in enabling and perpetuating water conflict, cautions Erika Weinthal of Duke University.

Weinthal and collaborator Jeannie Sowers of the University of New Hampshire have assembled a database of attacks on critical water, energy, sanitation, transportation, and health infrastructure in the Middle East. Damage to wells, canals, water pipelines, and treatment works have frequently occurred alongside political conflicts in the last decade in Gaza, Iraq, Syria, and Yemen.

Years ago, public officials and outside observers were concerned that conflict between countries over diminishing water supplies would lead to war. Those fears have been largely without merit. Research has shown that cooperation among countries that share rivers is a far more common outcome.

Nevertheless, there are reasons to worry that the future might not resemble the past.

Though armed international confrontations directly related to water are rare, Gleick said that sub-national conflicts are increasing. That includes disputes over irrigation canals in India and access to grazing land in the Sahel. Cyberattacks in which hackers target the computer systems that operate dams and water treatment plants are an emerging threat.

In larger conflicts, like the war in Ukraine, water is often collateral damage. Weinthal worries about cascading effects and “slow violence” that stems from attacks on critical infrastructure: oil leaks that pollute watersheds and fields, hospitals unable to function because of fractured water supply pipes, the inability to access land to drill a new well.

Databases like the Water Conflict Chronology are helping scholars plot the future of water-related violence.

The Water, Peace and Security partnership is a joint effort from the Ministry of Foreign Affairs of the Netherlands and the German Agency for International Cooperation that incorporates the expertise of six research institutes and non-governmental organizations. Using computer modeling, the partnership produces quarterly forecasts that attempt to anticipate regions where water might spark conflict in the next 12 months.

“We literally tie past conflict to projections of future conflict,” Charles Iceland told Circle of Blue. Iceland is the acting director of the water program at the World Resources Institute, one of the project partners.

The predictive model has a specific focus, Iceland said. To use the Pacific Institute’s language, the model is not evaluating the odds that water will be a casualty of war or used as a weapon. It is instead looking for areas in which water might trigger violence.

Iceland said the goal of the project is to prevent conflict before it begins, giving international agencies and national governments the information they need in order to calm tensions ahead of the shooting.

In Ukraine, however, peace has already been broken. The war, now in its third week, is testing the bounds of international law, which prohibits targeting civilian infrastructure, such as wells and water delivery systems.

Weinthal said that Russia’s tactics in the initial assault amount to a “scorched earth policy” where few targets — civilians, hospitals, and water systems — are left untouched.

“It’s a level of brutality we have not seen in a long time,” she said.

(This article originally appeared on circleofblue.org)

Water Security in a New Age of Nationalism

The idea of a “new middle” or “third way”—a blend of neo-liberal economic doctrines and social policies that was supposed to overcome the dichotomy between...

EU: Water is not only a driver of social and economic development but also of peace and security

On 22 March 2018 on the occasion of the World Water Day, the EU called on all States to fulfil their obligations regarding access to safe drinking water without...

Hydropolitics, climate change and peace-building in the South Caucasus

Will Climate Change Cause Water Conflict?

One man’s mission to remove trash from the polluted river in Baghdad has inspired a nationwide movement that shows how environmental efforts inspire peace.