Beyond conflict: Addressing climate-related shocks as a whole 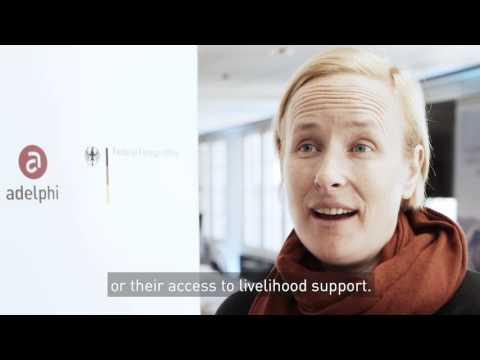 WATCH: In this video, Rachel Slater from the Secure Livelihoods Research Consortium (ODI) stresses that in order to help people survive in conflict-affected settings, we need to address climate-related shocks. We must not work in single sectors, but put all things together.

Floods and drought are a much more frequent and common shock in people's lives than violence or fighting, even in conflict-affected situations.

The video was produced by Paul Müller-Hahl (Lichtbilder Filmproduktion) and directed by Stella Schaller (adelphi), with kind support by the Planetary Security Initiative and the German Federal Foreign Office.

"My name is Rachel Slater and I work at the Secure Livelihoods Research Consortium, which is a very big research programme, trying to see how people make a living particularly in fragile and in conflict-affected situations.

One of the big things that we have learned in 5 of the countries where we work is that when households are trying to survive they face all sorts of shocks and stresses and the really interesting thing that we found is that quite often those shocks and stresses are not just about conflict. There are all sorts of other things that affect people’s capacity to make a living. A good example of that is for example when people face floods or droughts. And what we find is that people talk about floods and drought being a much more frequent and common shock than experiencing violence or fighting, even in conflict-affected situations. Now we cannot say that the floods are more impactful on people’s lives than the conflicts, but what we can say is that they make things very complicated for them. And when we are trying to do things to help people survive in conflict-affected settings, we need to make sure that we address those climate-related shocks that people face.

I think the main thing that we have learned about how we support people in those kinds of situations is that we cannot work in single sectors. We cannot have programmes that only do conflict. We cannot have programmes that only try to address people’s access to water or their access to livelihood support. We need to try and find ways of bringing those things together. And there are some examples of programming. For example, programmes that try and build infrastructure at the same time as having objectives to reduce conflict within communities that can be really helpful in that regard.

If we are going to make a difference in people’s lives in conflict-affected places, we need to programme for more than conflict. So we need to incorporate supporting livelihoods and helping people face the risk of flooding or droughts or other climate-related activities. Only by putting all these things together are we going to make a real difference."

Governments have agreed a set of guidelines to protect the environment during and after wartime, the most significant legal update on the issue in 50 years.

At the forefront of climate action: local approaches to climate-sensitive conflict and violence prevention

This publication calls attention to and provide examples of local initiatives for climate-sensitive conflict and violence prevention. In addition, the...

WATCH: The panel discusses how equitable access to land and natural resources can be realized through legal empowerment of justice seekers and by strengthening...