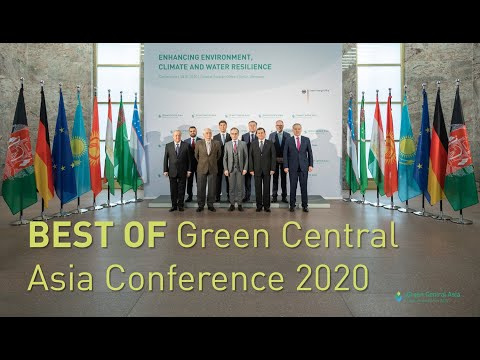 WATCH: On 28 January 2020, the German Federal Foreign Office held a conference in Berlin to mark the launch of Green Central Asia, a regional initiative on climate and security in Central Asia and Afghanistan.

The Conference was opened by Germany’s Foreign Minister Heiko Maas and the EU’s High Representative Josep Borrell, and it brought together the foreign ministers of the Central Asian states and Afghanistan as well as more than 250 participants from several sectors. Watch the conference’s best moments here. You can read the speeches, as well as the Joint Declaration signed by the foreign ministers, at: https://green-central-asia.net/

Voice over:"Climate change is a geopolitical issue. It has manifold effects on foreign and security policy: Rising sea levels, desertification and the destruction of ecosystems are increasingly threatening to deprive people of their livelihoods and jeopardising the stability of states and societies. In Central Asia and Afghanistan, climate change has had a particularly severe impact on water, land and soils, among other things due to the melting of mountain glaciers."

Johann Rockström, PIK: "So overall, the whole region is so dependent on stable climate conditions and these are being destabilized right now. And if you look at the projections into the end of the century, if we continue burning fossil fuels as today, you'll see 3-4 degrees Celsius warming in Central Asia, which can impact in a very dramatic way on food security and water security in the entire region."

Abdulaziz Kamilov, Uzbekistan:"Climate change is one of the most important challenges for Central Asia, for the whole region. And that's why it needs to take common steps, common measures by Central Asian countries."

Voice over: "The Federal Foreign Office launched its Green Central Asia initiative to tackle the impact of climate change. The aim is to foster stronger regional cooperation, improve the exchange of information and form connections with academia and civil society."

Susanne Schmeier, IHE Delft: "So first of all, I think initiatives such as the Green Central Asia Initiative bring together different actors, bring them around the table and enable them to exchange experiences that they already have in adapting to climate change, in bringing the security dimension in. And then, last but not least, hopefully also develop new initiatives and bring the countries closer together to develop joint adaptive and resilient solutions."

Voice over: "At the high-level conference in Berlin on January 28th 2020, a joint declaration on cooperation in the field of climate and security was signed by the foreign ministers of Afghanistan, Kazakhstan, Kyrgyzstan, Turkmenistan, Tajikistan and Uzbekistan."

Chingiz Aidarbekov, Kyrgyzstan:"We will continue to discuss this issue with the German side, with the European Union institutions to adjust their vision with our problems, with our vision, and to work out the most efficient road map."

Sirojiddin Muhriddin, Tajikistan: "When you are starting any initiative, first of all, you have to believe in the people, in the countries, who are cooperating with your country on these issues. And we believe in this initiative. That’s why this is, I think, a good message, which I will bring to my government, to our people to talk about this initiative."

Dinara Ziganshina, SIC ICWC: "We need strong commitments. We need strong political will. We need new technology and approaches, but also a flexible mindset. So I think all this will help us to transform Central Asia in a green, peaceful and prosperous place."

WATCH: A Green Central Asia can be a blue print for preventive and stabilising climate foreign policy. This panel discussion explores how scientific and...

What Brazil’s elections could mean for relations with China

Analysts say agribusiness links are likely to continue to advance, but diplomacy may follow different paths depending on the winner of October’s presidential...

In the beginning of August, India’s Union Cabinet of Ministers approved the country’s updated Nationally Determined Contribution. The commitments reveal that...

While China is embarking on a bold decarbonisation journey, its foreign investment portfolio remains carbon heavy and raises sustainability concerns.

Q&A on the Belt and Road Initiative

This interview with adelphi’s Daria Ivleva sheds light on China’s Belt and Road Initiative (BRI), and its implications for EU-China relations and global climate...

Japan will join the EU in aiming for net-zero emissions by 2050, Prime Minister Yoshihide Suga announced on Monday (26 October).

Will border disputes in the Himalayas affect climate research?

A little over a decade ago, the Himalayan region was considered by the IPCC a 'black hole for data'. Small steps have been taken since then, but now scientists...

How to strengthen climate services and climate diplomacy in South Asia