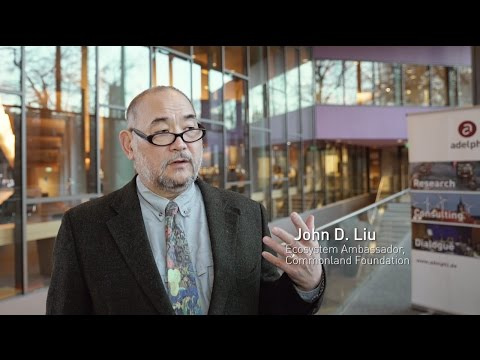 WATCH: What is the true basis of wealth? Where does it all come from? The hydrological cycle, soil fertility and biodiversity are not the first things people usually think of, but they are the foundation of life.

John D. Liu, Ecosystem Ambassador, stresses that our economic system based upon accumulation causes poverty for billions of people and degrades landscape all over the world. The future of humanity is at stake.

"I think that you do not have to buy human rights. You are born with equal rights and it is not just humans that have rights, it is all living things. And so to look at the historical inequities and the structures, which have been built up over long periods of time and say that they are immutable, is not true. What is true, is that there are natural laws and these natural laws create the atmosphere, the hydrological cycle, the soil fertility and the biodiversity and this is the basis of life. And ultimately when you understand this, you realize that this is the basis of wealth.

So right now, the economic systems that we have are saying that materialism, the accumulation of derivatives, things, which are dug up and manufactured and bought and sold, are the basis of wealth. Well they are not. That is just an accumulation of materialism that is actually causing enormous poverty for billions of people and degraded landscapes all over the world. When you understand that the basis of wealth is the atmosphere, the hydrological cycle, the soil fertility and the biodiversity and that is the basis of economy. When you understand that, you cannot degrade, you cannot pollute, to do so would be to have less. If we want to have more, if we want to have growth, we can no longer have growth in an economy, which is based on materialism because it is impossible to infinitely grow based on finite resources. This is just a logical construct, it is not an opinion, it is that it is impossible to infinitely grow based on finite resources.

But where we can have growth is in function and if function is the basis of wealth, then the future of humanity will be in tremendous shape because all human effort will go to protect and to conserve and to restore all degraded landscapes on the planet. That is the way to ensure food security, biodiversity and climate regulation.”

Why is tackling climate change vital to peace?

Climate change is changing the world we live in. It affects every aspect of life in and represents a central obstacle to peace and to achieving the UN...

This infographic shows the countries that receive funding from the United Nations Peacebuilding Fund (PBF) and their vulnerability score to climate change. In...

As the second week of COP25 begins in Madrid, it is time to stress once more the importance of building momentum for adaptation. There is obviously a need for...

The Brown to Green Report 2019 is the world’s most comprehensive review of G20 climate action. It provides concise and comparable information on G20 country...

All Change and No Change: G20 Commitment on Fossil Fuel Subsidy Reform, Ten Years On

Ten years after committing to phase out fossil fuel subsidies, G20 countries still subsidise coal, oil and gas to the tune of around USD 150 billion annually...

No country is immune to natural hazards, but for fragile states, the effects are even more severe. Mostly, conflict prevention and humanitarian aid are seen as...

Five things to watch at UN climate talks in Bonn

From contentious rules on carbon trading, through efforts to raise ambition to who will host next year’s summit, negotiators have a full agenda this fortnight...

Limited access to energy is a significant barrier to development and holds back efforts to improve living conditions in developing and emerging economies...