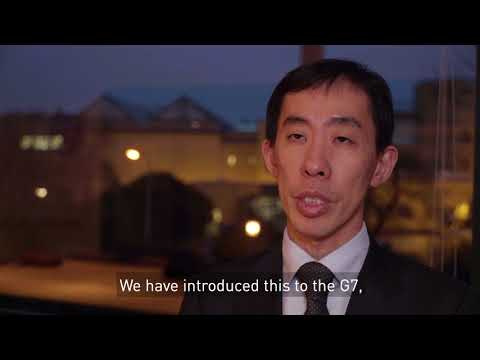 WATCH: Japanese foreign policy sees climate change as a severe threat to peace and security. In this interview, Tomoaki Ishigaki from the Ministry of Foreign Affairs highlights why climate is high on the Japanese agenda and what the G7 is currently up to.

"We believe that climate change is one of the gravest threats to peace and security. People tend to think that climate change is an environmental issue, but we strongly disagree. It has huge implications not only for the environment, but also for the economic and social well-being of the people and, of course, even causes conflict if we do not handle it properly. For example, when we have the SDGs (Sustainable Development Goals), we can address the issues of education, sanitation or food supply, but we cannot live in a world fifty years later that is too hot, too cold, or difficult to survive. All these individual causes will not be solved unless we cover the much bigger issue of climate change.

First, we were the Presidents of the G7 process from 2016 to 2017; that is when we became very serious in exploring the policy implications of the climate and security nexus. We have convened an international conference in January and issued a report with help of institutions like adelphi and others in September. We have introduced it to the G7, as well as in COP and to other stakeholders, and we hope to expand this to our foreign policy agenda. The G7 is now in the process of issuing the progress report for the next Canadian presidency, the Italians are now working on it. Japan has already presented a few ideas that we feel are good practices and can be replicated by others, and also we would like to see how we can strengthen our ties, not only within, but also outside of the G7 members, particularly those countries which are vulnerable to the impacts of climate change."

The Environmental Collateral Damage of the South China Sea Conflict

Climate and Security in the Indo-Asia Pacific

The International Military Council on Climate and Security (IMCCS) has released a new report urging leaders to make climate change a “security priority” in the...

Will India shift its stance on climate security in the UNSC?

It’s official: India has been elected as a non-permanent member of the United Nations Security Council (UNSC) for 2021-22. Previously, the country has adopted a...

Climate and conflict in South and Southeast Asia

A recently published paper by the Stockholm International Peace Research Institute (SIPRI) has focused on the under-researched topic of how climate change...

Climate pressures and geopolitics in Pakistan: the case for regional cooperation

Regional initiatives can be a milestone for addressing planetary security

The destruction caused by Cyclone Ockhi in South Asia portends what a ‘climate-changed’ world has in store for humankind, especially taking into consideration...

Water-Energy Nexus in the Himalayas

The region at the base of the Himalayas faces difficult tradeoffs when allocating water for energy production versus agricultural, industrial, and domestic uses...

The Indian military could be an instrumental player and leading force in India’s climate change strategy on domestic and international fronts. Dhanasree Jayaram...