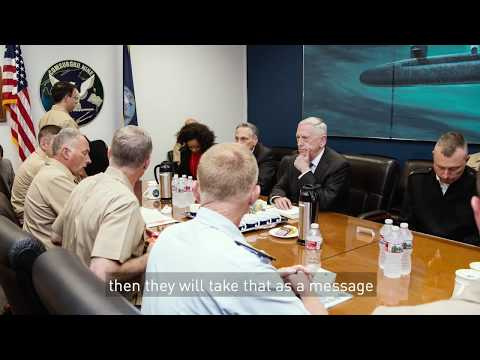 WATCH: Increasing vulnerability of coastal military bases, an opening polar route in the Arctic, and global instability are main threats bringing climate change into the focus of the US Defense Department. Sharon Burke, Senior Advisor to New America and former Assistant Secretary for Defense, describes how the military balances preparedness for climate impacts with challenges arising from the current US government.

She hints as to how other countries can support in positioning climate change higher on the US agenda.

"The US Defense Department has been looking at climate change and climate security for some time. I would not say it is their top priority, because there are so many challenges right now for the US Armed Forces; they are engaged in Iraq, in Syria, in Afghanistan, things are looking very problematic with North Korea. Nonetheless, it is an organization that is always looking at the long-term as well, and the ways in which the Department of Defense has been looking into climate security is, first of all, for their bases.

The United States military, either oversees or owns something like 28 million acres worldwide, and a lot of those locations are on coast lines. Some are in very arid places; in the United States there are training ranges in Texas, in New Mexico, in Nevada; there are training ranges in Alaska that are very important for the US forces to be ready for all of their missions, and they are concerned about the way climate change is affecting all of that land, all of those places; they are trying to understand that and trying to adapt. Second is the Arctic; when you have seen overhead imagery of the Arctic and have seen the ice melting, and the water way opening up there for the first time in human history, it is impossible not to take it seriously and not to take climate change and climate security into account.

The Department of Defense has seen the imagery, also sees what other countries in the region – including Russia – are interested in in the Arctic and they take it very seriously as well, as something that is their concern, a military concern. There’s a long history of peaceful cooperation in the Arctic and there is every reason to think that that will continue, but it certainly is a whole polar route opening up, and that is a strong concern, so they look at that.

And finally, they need to think about how climate change is affecting security and stability worldwide; where it is forcing people to move, where it might cause or might excite underlying conditions and lead to conflict. They know that and they are still looking into how to incorporate those concerns into the way they think about the future. Having said all of that, our national command authority responds to the President, he is the Commander in Chief, and if this President directs them not to be concerned about it, they won’t be a leading voice. However, planning will continue because, as an institution, it is getting ready for the future at all times.

So other countries, if they think climate security is a top priority, then they need to treat it that way in their dialogue with the United States, they need to raise it. When they raise concerns about trade or when they raise concerns about North Korea, they need to raise concerns climate security and what the United States is doing, and what we could be doing together. Because if this is an issue that only the Ministers of the Environment discuss with each other, it stays there. If you are not willing to raise it with military leaders, then they will take that as a message that that is not important to you and it shouldn’t be important to them. I would definitely encourage all of our friends, allies and partners worldwide that, if they are concerned about climate change and climate security, that they raise it with their counterparts in the United States at every opportunity, at every occasion – show that it is serious."

The interview was conducted by Stella Schaller, adelphi.

The scope of national security is expanding beyond violent threats to encompass a broader array of dangers. In an article for World Politics Review, CFR's...

WATCH: For national  defence bodies, climate impacts represent "non-traditional security threats", with which they are often not familiar and not adequately...