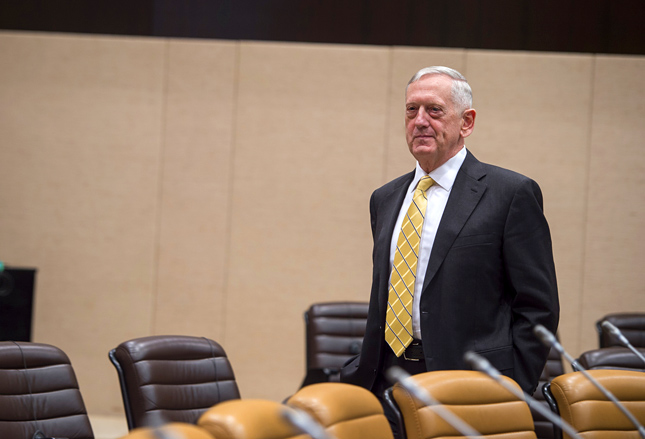 This week, newly minted Secretary of Defense James Mattis joined a long list of senior U.S. military leaders who have warned about the national security threats of climate change.

In previously unpublished written testimony before the Senate Armed Services Committee, Mattis wrote that “climate change can be a driver of instability and the Department of Defense must pay attention to potential adverse impacts generated by this phenomenon,” according to Pro Publica, which published parts of his remarks.

Mattis was the first cabinet member of the new Trump Administration to be confirmed and his answers to the senators’ questions were apparently delivered after his vote.

“I agree that the effects of a changing climate – such as increased maritime access to the Arctic, rising sea levels, desertification, among others – impact our security situation,” he wrote. “I will ensure that the department continues to be prepared to conduct operations today and in the future, and that we are prepared to address the effects of a changing climate on our threat assessments, resources, and readiness.”

Mattis is not alone in his assessment. Every sitting secretary of defense since Robert Gates, first appointed in 2006 by George W. Bush, has noted that climate change is a significant and appropriate concern for the department.

Ash Carter cited the strategic implications of a melting Arctic, rising sea levels, and more displacement around the world. “We’re seeing change,” he said in 2016. “Patterns of climate affect human security because they cause people to move and famines to occur and things like that that have security implications.”

“Mattis’ remarks reflect a military priority to assess and act on all potential threats, whether politically fashionable or not”

Chuck Hagel warned of the implications for operations and facilities in a 2014 address to South American military leaders. “A higher tempo and intensity of natural disasters could demand more support for our civil authorities, and more humanitarian assistance and relief. Our coastal installations could be vulnerable to rising shorelines and flooding, and extreme weather could impair our training ranges, supply chains, and critical equipment. Our militaries’ readiness could be tested, and our capabilities could be stressed.”

Leon Panetta, in 2012, named climate change, and environmental threats generally, among a number of new threats to national security in the 21st century. He cited Teddy Roosevelt (“in utilizing and conserving the natural resources of the Nation, the one characteristic more essential than any other is foresight”) and said taking climate change seriously was part of the department’s focus on the long-term view.

And Robert Gates said in 2008 that “we also know that over the next 20 years and more, certain pressures – population, resource, energy, climate, economic, and environmental – could combine with rapid cultural, social, and technological change to produce new sources of deprivation, rage, and instability.”

Gates went on to hail the combined efforts of civilian diplomacy and development institutions, praise then-Secretary of State Condoleezza Rice, and call for more resources for the Department of State to “harness the full strength of America.”

Mattis hinted at a similar line of thought in his testimony almost a decade later.

“Climate change is a challenge that requires a broader, whole-of government response,” he wrote to Senator Jeanne Shaheen of New Hampshire. (As head of the U.S. Central Command in 2013, he also said, “If you don’t fund the State Department fully, then I need to buy more ammunition.”)

Such acknowledgements by the military and intelligence communities about the seriousness of climate change are not rare. Nor are they necessarily intended to suggest climate change should be the primary focus of the U.S. security apparatus or anything about a hierarchy of threats, vis-à-vis terrorism, nuclear weapons, or any other complex danger faced by the United States today.

But such consistent concern across multiple administrations and leadership styles demonstrates that climate change has been a significant factor in U.S. national security thinking for some time.

“Mattis’ remarks reflect a military priority to assess and act on all potential threats, whether politically fashionable or not,” says ECSP Senior Advisor and Ohio University Director of Environmental Studies Geoff Dabelko. “They illustrate the focus of uniformed leadership not only on climate change’s potential to contribute to threats as a ‘threat multiplier,’ but as an important factor in how and where the military is able to operate.”

2017 Is Pivotal for U.S. Leadership on Global Water Security

European Union leaders must heap pressure on Donald Trump over his climate change scepticism because global warming poses a global security threat, a retired US...

Climate Change, the U.S. Military, and “the Intersection of Politics and Events”

There may not have been a single question about climate change in the 2016 presidential debates, but it remains a hotly contested, partisan issue for many in...

Briefing Book for a New Administration: Recommended Policies and Practices for Addressing the Security Risks of a Changing Climate