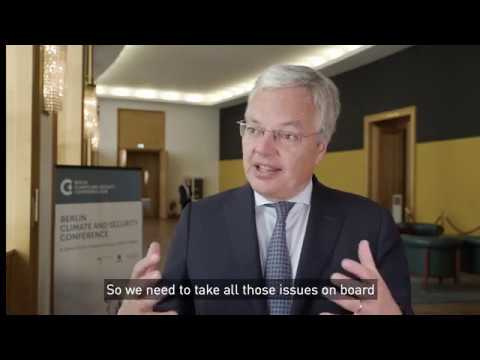 WATCH: Security is often equated to conflict and violence; however, these are only effects of other underlying issues. Didier Reynders, Deputy Prime Minister and Minister for Foreign Affairs and Defence of Belgium, explains the importance of supporting vulnerable countries in preventing conflict by dealing with the root causes that undermine security, particularly climate change.

"We need to take many measures to fulfill our commitment in the Paris Agreement and maybe more than that because it's not enough. So we are working hard on the fight against climate change and we are doing a sort of job at the European level with our colleagues to try to play a leading role at the worldwide level – to go more and more to a multilateral approach about the fight against climate change.

But since many times we are thinking about the link between climate and security. And at the beginning of this year we have had an interesting meeting at the Security Council level, because Belgium is elected for two years as a non-permanent member of the Security Council like Germany. And we try to work together to explain it: security is not just armed conflicts. It's more than that.

And so we need to take care about the consequence of climate change in different parts of the world. And to be honest, from Belgium we are first of all thinking about Africa – the Sahel – to give an example. We are working hard – sometimes with a military presence, sometimes a diplomatic presence – to have a political solution. But also with development aid to fight against climate change. And to develop the activities, and to create jobs, and to create economic opportunities in the countries. And at the Security Council level it's more and more important to do that.

And so as foreign affair ministers we are more and more involved in that. The link between security and other issues: migration, but sometimes due to climate change, also poverty, bad governance, human rights. So we need to take all those issues on board when we are discussing about one region or one country. And to do what? Not only to solve a conflict, but if it's possible, to prevent."

Climate and Environmental Security are becoming an important issue for peace operations – both related to mandate delivery, as well as to the ecological...

Around the world, climate change interacts with social, political, economic, and environmental drivers of conflict and fragility, thereby challenging the...