3 Priorities for Europe to Act on Climate and Security 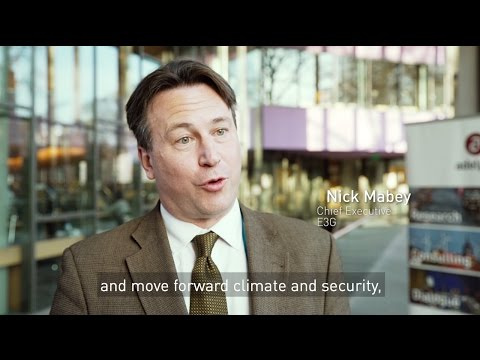 WATCH: After Trump has been elected, what should the EU do about climate and security? Nick Mabey, Chief Executive of E3G, highlights three domains in which the EU should act. Will EU leaders be able to push that through?

The EU should act in the following three areas: (1) keeping climate change below 2 degrees, (2) monitoring instabilities and (3) integrating climate security into the UN Security Council.

"There is a real opportunity now for Europe to take a real role and move forward climate and security, but it has to make some tough decisions about what it wants to prioritize. It can’t do everything and before it is trying to spread itself a bit too thin.

So we already see four main priorities over the next few years. Firstly, it really needs to grip keeping climate change below 2 degrees, because Europe can’t manage a world where climate change is out of control. It is in a very vulnerable region, it is very vulnerable itself. And particularly post the Trump election, we really need to have a strategy on how to deliver a well-below 2 degree world - but we also need to deal with the impacts now. And the most obvious place where we need to look at the impacts of climate change is the Middle East and North Africa.

Europe has assigned a huge amount of money to stabilize the region, but none of it is really looking at climate change and resource issues, but if we focused our attention on those issues, with really smart capacity, we could make a huge difference. That in itself would change how Europe works.

But also, we need to look at perhaps some of the less understood consequences of tackling climate change, because also in our region are lots of oil and gas producers who are suppliers of oil and gas; we are the world’s biggest importer, but as we reduce dependence on oil, increase electric vehicles, oil prices lower. And they are all suffering: Already, Saudi and UAE have got plans to transition but Russia hasn’t. So again, we need those producers to be stable while they are still our oil producers and gas producers, but also when they stop being our oil producers and gas producers but are our neighbors. Europe needs to start monitoring instability, caused by climate policy, not just caused by climate change, it its critical regions.

And the last area where Europe can act is to integrate climate into the UN. There are a lot of promises made to put climate change across the whole UN system, including the UN Security Council. Europe has got a real chance next year and the years coming, to push that through, because it has got quite a lot of Security Council members including Sweden, the Netherlands, Italy as well as the permanent members.

If Europe did all those things, it could really have an impact on climate and security, turning it from nice rhetoric, which it had for 10 years, to real action.”

This report discusses the possible effects of climate change on issues at the core of European foreign, security, and development policy – livelihoods, food...

Contributing to the emerging literature on the geopolitical and foreign policy implications of decarbonisation and energy transition processes, this book sheds...

Climate, conflict and COVID-19: How does the pandemic affect EU policies on climate-fragility?

This paper explores the implications of COVID-19 on relevant EU policies and strategies that address the climate security nexus, focusing on three regions: the...

The key barrier to further, faster action against climate change is the lack of financial and technical support for green, resilient and just transitions...

Operationalising the external dimension of the European Green Deal

Asserting its international role and enhancing climate action are critical to the foreign affairs of the European Union (EU). This should make the external...

Since the European Parliament issued its resolution on climate diplomacy in June 2018, several important trends have been shaping this area of the EU’s external...

Climate change, peace and conflict: Perspectives from the European Union

In 2020 EPLO, together with adelphi and the Climate Diplomacy initiative, with support from the German Federal Foreign Office, organised two series of online...

Climate-Resilient Trade and Production: The Transboundary Effects of Climate Change and Their Implications for EU Member States

This brief provides an overview of the state of knowledge on transboundary climate risks in Europe, and explores how this knowledge could help Member States...