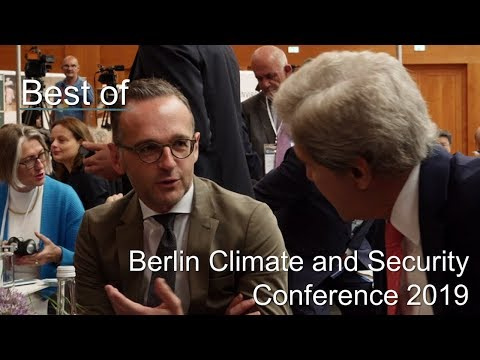 WATCH: From politicians to climate scientists and security experts, a group of high-ranking specialists gathered at the Berlin Climate and Security Conference 2019 #BCSC19 on 4 June 2019 in Berlin. Watch some of the conference's best moments, key statements and short expert interviews.

High-level specialists joined forces at the Berlin Climate Security Conference in order to convey one clear message: the climate crisis directly affects security, and the time to act is now. The conference culminated in the Berlin Call for Action, which sets out three concrete action areas.

Voice over
"Young people around the world are demanding action on climate change – now!

Abdulla Shahid
The young people today are saying enough is enough. They are coming on to the streets. They are looking at us with despise. They are telling us: look the grown-ups are failing us. You are dragging yourselves but it is our future that you are wasting. The change in climate. The sea level rise, that is predicted, is going to affect us in an existential manner.

Margot Wallström
Not to continue to believe that this is something that will happen in the future, that it will influence somebody else or affect somebody else somewhere else. It is now in our everyday lives as well – everywhere.

Heiko Maas
We have no time to lose, to put all of this in a nutshell. We have long since started to pay a high price for our past shortcomings, the damage we have inflicted on earth. The impacts are already threatening the lives of millions of people. If we don’t change course, then we are heading towards a hot age with barely manageable consequences for peace and security.

Voice over
Climate change acts as a risk multiplier that will exacerbate existing conflict drivers, particularly in fragile states where institutions are weak and governance is poor.

Shahriar Alam
But we need the UN to play a larger role. They can play a critical role from the UN Security Council, even though some might argue that this is not within the objective and scope of the Security Council.

Voice over
Time is up in ignoring the security threats presented by climate change.

Ottmar Edenhofer
I think the most important thing is that climate change becomes a security issue, because this is a natural entry point to convince national governments and nation states because they are very much concerned about the security issues.

Voice over
That is why the German Federal Foreign Office, adelphi and the Potsdam Institute for Climate Impact Research organised the international Berlin Climate and Security Conference in June 2019. The conference is a clarion call to every foreign policy institution to step up efforts to address one of the greatest global security and foreign policy challenges of the 21st century. Foreign ministers and high-level policy makers from around the world met with renowned scientists to discuss how to combat those risks. The outcome was the Berlin Call for Action – a document that sets out three concrete action areas for tackling the risks posed by climate change to peace and security:

Firstly, it calls for more comprehensive and global analysis of the risks that climate change poses for peace and security. Secondly, it stresses the need to enhance our capacity for deal with climate-induced catastrophes at national, regional and international level. Within the UN system, this could be achieved by strengthening the UN's Climate and Security Mechanism. Thirdly, it underlines the importance of improving operational responses to climate-security risks, right from early warning, to mediation, to peacebuilding operations. Germany has made advancing the climate security agenda a top priority for its membership of the UN Security Council in 2019 and 2020.

John Kerry
It's imperative to move urgently. But it's also imperative to have the right narrative, the right message about the economic benefits of moving forward. This is good policy, good national security policy, good economic policy, good social policy. It can address all of the concerns we have about migration about threat to food, human rights. Everything is involved in dealing with climate change. And if the foreign ministries will come together like that we have great possibilities.”