BEST OF: Planetary Security Conference 2017 and The Hague Declaration 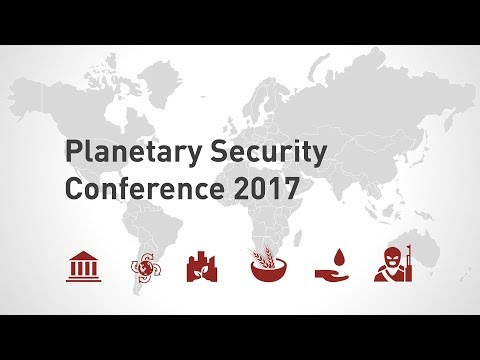 WATCH: At the third Planetary Security Conference in The Hague, experts and policy makers met to share knowledge on how to deal with those challenges to security that are aggravated or caused by climate change impacts. This Best-Of video features highlights of the conference from 12-13 December 2017 and explains The Hague Declaration on Planetary Security.

2017 was a year of climatic extremes. Hurricanes, floods and tropical storms buffeted the Caribbean, North America, Europe and Asia. Drought and desertification pushed thousands towards extreme hunger in the Sahel. And the ice in the Arctic is now the thinnest it’s ever been.

People tend to think that climate change is an environmental issue, but we strongly disagree. It has huge implications not only for the environment, but also for the economic and social well-being of the people and, of course, even causes conflict if we do not handle it properly.

The solution has to be in ways we behave. Status quo is not possible – so what do we do?

This year’s conference saw the launch of the Hague Declaration on Planetary Security. This offers a programme of concrete actions, like the creation of an institutional home for climate security within the United Nations, enhanced coordination on migration issues, and the promotion of urban resilience. Other actions are to support struggling countries and regions such as Mali, Iraq and the Lake Chad region.

We see the Hague Declaration as a call, a wake-up call also for the rest of the world with its global outlook and specific focus on certain areas, including Iraq.

Climate change and its impacts are now high on the international agenda. We can see the effects on the environment, the economy, on geopolitics, migration and on security. No government can tackle them alone. The Planetary Security Conference emphasised the need to work together, at all levels.

You all belong to the community of practice on planetary security. We cherish to have you gathered here and involve you, learn from you and inspire you to take follow-up action as much as you can.

I think The Hague turned out to be the place to be for everyone who is working on climate and security.

The production of this video is supported by the German Federal Foreign Office and the Planetary Security Initiative. We also thank the Clingendael team for their help and cooperation.

The video was directed by Stella Schaller (adelphi) and produced by Paul Müller-Hahl (Lichtbilder).