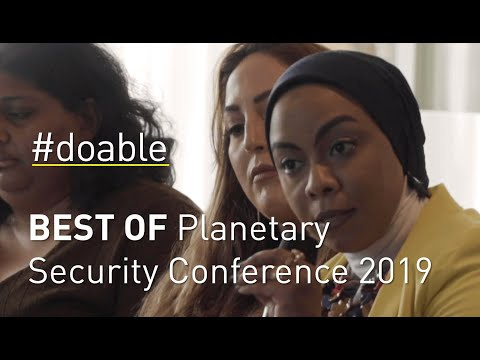 WATCH: For the fourth time, The Hague has hosted from 19-20 February the Planetary Security Conference. This year, the conference’s motto was #doable. Implementation of measures to tackle climate security risks were at the table, and the conference was transformed into a platform for sharing experiences and learning lessons on climate action. Watch some of its best moments.

Voiceover: “The past few years have seen a growing global concern over climate-related security risks. Governments and researchers have undertaken a long process to understand these risks and set an international agenda on climate security. Now the focus lies on action. The 2019 Planetary Security Conference in The Hague brought together in its fourth edition a community of experts and decision makers to exchange ideas and solutions on how to deal with the security problems caused or aggravated by a rapidly changing climate.”

Sigrid Kaag, Dutch Minister for Foreign Trade and Development Cooperation: "Out of necessity and the sheer risk of the threat that is yet ahead of us, lies also the capability and capacity to address the solution.”

Eliot Levine, Director of Environment, Energy and Climate, Mercy Corps: “One of the major benefits of a conference like this is the ability to just have discussions and talk to people who you would not have previously ended up in a room with and learning something new.”

Ayesha Siddiqi, Lecturer in Human Geography, Royal Holloway University of London: “Here, where a lot of people are coming from a more high level policy debate, that interaction, intersection between the high level policy and what's going on locally on the ground, the lived experience, that kind of match or that conversation is possible at something like the planetary security conference.”

Voiceover: “Climate change affects security by damaging livelihood systems, cutting the lifeline of communities and destabilizing entire regions with each severe climatic event. Addressing climate security demands a holistic effort, both to alleviate the impacts of climate change and to create systems that are more resilient to them.”

Nadim Farajalla, Director of Climate Change and the Environment, American University of Beirut: “Climate change affects resources, and resource scarcity affects the economy, and the economy then affects people, who either tend to migrate or move on, and this resource scarcity and economic downturn might lead to social unrest.”

Camilla Born, Senior Policy Advisor in Climate Diplomacy, Risk and Security, E3G: “We can see the climate change, we can see it shaping the peace and security landscape and we want more, and we want to do something with this.”

Voiceover: “This year’s conference motto was #doable. Actors of different regions and fields shared their experiences with implementing the Hague Declaration, launched in 2017.”

Yana Abu-Taleb, Jordanian Deputy Director, EcoPeace Middle East: “What I like about this conference in particular, is the doable part. What we can do. It's no more just sharing experience, but looking further at what really can be done on the ground, building on the knowledge of all those experts and linking climate change to security.”

Alexander Carius, Director, adelphi: “This year's hashtag is ‘doable’, and I wish we could twitter over the next couple of years ‘doing’, and in a few years from now we can twitter success stories under the hashtag ‘done’.”

Adnan Z. Amin, Director-General, International Renewable Energy Agency: “If we are unable to achieve the planetary security objectives, the cross sectoral issues that are being addressed in this conference, we will be in a very difficult situation in a decade.”