Climate Change and Security: The Month Ahead in The UNSC

1 February, 2021
© Mark Garten/UN Photo
The Security Council in session at the UN headquarters in New York

In February, the UK plans to host a high-level open debate, “Addressing climate-related security risks to international peace and security through mitigation and resilience building.” The meeting is expected to consider conflict risks, peacebuilding approaches and ways to support adaptation and resilience in climate-vulnerable contexts. UK Prime Minister Boris Johnson is expected to chair the meeting. Secretary-General António Guterres is an anticipated briefer.

In recent years, the Security Council has begun to focus increasingly on the negative security effects of climate change on various country- and region-specific files on its agenda. In 2020 alone, language on climate change was integrated into Council outcomes on the Central African Republic, Darfur, the Democratic Republic of the Congo, Mali, Somalia, and West Africa. Frequently, this language has emphasised the need for adequate risk assessments and risk management strategies to cope with the adverse security effects of climate change and other environmental factors in particular situations.

The awareness of the connection between climate change and security was also reflected in the signature events pursued by various Council presidents in the second half of 2020. The UK is continuing this trend with its February open debate. The relevant signature events in 2020 were: the 24 July 2020 open videoconference (VTC) during the German presidency on the “Maintenance of international peace and security: Climate and security” (watch analysis interview below); the 17 September 2020 open VTC during the Nigerien presidency on the “Maintenance of international peace and security: Humanitarian effects of environmental degradation and peace and security”; and the 3 November 2020 open VTC during the presidency of St. Vincent and the Grenadines on “Peacebuilding and sustaining peace: Contemporary Drivers of Conflict and Insecurity”. 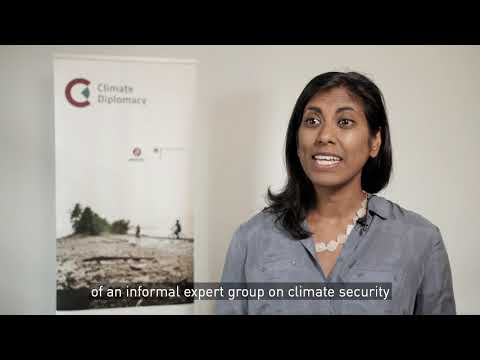 On 24 July 2020—the same day as the open VTC on climate and security spearheaded by Germany—ten members of the Security Council (Belgium, the Dominican Republic, Estonia, France, Germany, Niger, Tunisia, St. Vincent and the Grenadines, the UK, and Vietnam) and three of the incoming members (Ireland, Kenya and Norway) issued a joint statement affirming that an Informal Expert Group would be convened “to assist the Council to achieve a more comprehensive and systematic approach on climate-security risks in situations on the ground”.

The first meeting of the Informal Expert Group—which, like other expert groups on the protection of civilians and women, peace and security, is not considered a formal subsidiary body of the Council—was held virtually on 20 November 2020. All 15 Security Council members attended the meeting, although China and Russia participated only as observers. Four incoming members (Ireland, Kenya, Mexico, and Norway) also took part in the meeting. The meeting focused on the security implications of climate change in Somalia and featured briefings by Special Representative and head of the UN Assistance Mission in Somalia (UNSOM) James Swan and Dan Smith, Director of the Stockholm International Peace Research Institute.

Council members and other member states might explore several key issues during the open debate. These include:

During the debate, some members may wish to explore options for the work of the recently formed Informal Expert Group. Since the Council has repeatedly underscored the importance of risk assessments and risk management strategies for climate-security threats, one option would be for the group to engage with UN officials, host governments and regional organisations on the way forward in undertaking accurate risk assessments and in developing and implementing effective strategies to manage these risks.

Another possible option would be for the UK to produce a chair’s summary of the debate, capturing the main themes of the discussion. Although the political environment might not be ripe in the Council for such action at present, in the future the Council could consider authorising the deployment of climate advisors in peace operations and regional offices where environmental or ecological conditions are having an impact on the security environment.

Later this year, also depending on the dynamics in the Council, members might consider reviving the draft resolution on climate and security initially proposed by Germany (and others) in advance of the 24 July open VTC on climate and security. The draft was supported by most members, but it was strongly opposed by the US and faced resistance from China and Russia.

Council members are divided over the Council’s role in addressing climate and security issues. Those supportive of the issue emphasise that factors such as drought, water scarcity, food insecurity, and desertification that are caused or exacerbated by climate change increase the risk of violent conflict. They have encouraged a more systematic integration of climate-related security risks into the Council’s work. China and Russia are less supportive of Council engagement on this issue. They believe that climate change is fundamentally a sustainable–development issue that is more appropriately addressed by other parts of the UN system, including the General Assembly and ECOSOC.

The Climate Security Expert Network (CSEN) supports the Group of Friends on Climate and Security and the Climate Security Mechanism of the UN system by synthesising scientific knowledge and expertise, advising on entry points for building resilience to climate-security risks, and helping to strengthen a shared understanding of the challenges and opportunities of addressing climate-related security risks. The network is supported by a grant from the German Federal Foreign Office.

The UK, which is spearheading the meeting, has long been a proponent of Security Council engagement on climate and security matters. It hosted the Council’s first debate on the potential impact of climate change on security in April 2007. From 1 to 12 November, it will also be hosting the 26th UN Climate Change Conference (COP26) in Glasgow, in partnership with Italy. Niger and Ireland are the co-chairs of the Informal Expert Group in 2021.

[This article originally appeard on securitycouncilreport.org]

The nature of conflict and peace: The links between environment, security and peace and their importance for the United Nations

A new report by WWF and adelphi looks at the complex nexus between nature and security. The report outlines four pathways through which environmental...

No time for half measures: A security perspective on the new IPCC report on mitigation

If we are to halt global warming and prevent future climate-related security risks, states should embrace the framework of strategies laid out by the IPCC...