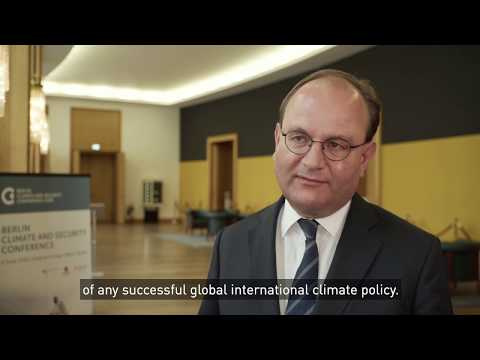 WATCH: Prof. Ottmar Edenhofer, Director and Chief Economist of the Potsdam Institute for Climate Impact Research, emphasizes the need for foreign policy to support the UNFCCC process and remarks that safeguarding our common future leaves no space for making only one nation great.

Linking climate change and security is about recognising a real threat, but also serves to strategically focus the attention of states on the climate issue.

"Foreign policy needs a change, because we can only solve the climate problem when we cooperate internationally. The climate problem is a problem of a global public good. And we have to define fair and efficient user rights, and this cannot be done unilaterally. This cannot be done by one nation state. This can only be done internationally. And ensuring international cooperation, creating a space where nation states can talk about their values, about their goals, what they want to achieve is one important issue.

And there is absolutely no opportunity, no reason to believe that in the 21st century you can make just one nation great. The only thing what we can do is we can basically create the conditions that basically all human beings can flourish on Planet Earth. I think the most important thing is that climate change becomes a security issue because this is a natural entry point to convince national governments and nation states, because they are very much concerned about the security issues.

So nation states could become more focused on this issue and this is very important: that there is an ongoing debate within the Security Council. The second next step is from my point of view that basically foreign policy should support the UNFCCC process.

And I hope that basically in the next few COPs we have effective negotiations on how to cooperate, for example, how to link carbon markets, how to bring carbon pricing to the attention of the national governments and coordination about carbon prices. This is from my point of view a necessary ingredient of any successful global international climate policy. And this could be quite tangible next steps."

The case of green growth in Ethiopia highlights the complex interactions of climate goals, economic development, and regional geopolitics.

Best of the Berlin Climate and Security Conference 2021

This year’s Berlin Climate and Security Conference (BCSC) focused on inclusive, actionable, and joined-up approaches to addressing climate-related risks to...

Climate resilience and conflict: multi-stakeholder partnerships as a way forward?

In recent years, there has been an outpouring of evidence that climate change is intensifying and driving conflict situations around the world. The socio...

The challenge of securing access to minerals for the green transition

One emerging solution to the climate crisis involves securing investments and prioritizing financial commitments towards clean technologies and shifting towards...

The world waits with bated breath to see if the COP26 will produce the ambitious climate action we desperately need.

This high-level virtual event looked at what key regional and national institutions are already doing to advance a comprehensive approach to security in the...

This high-level session kicked off the Berlin Climate and Security Conference 2021 and set out the need and value of a shared agenda for action to tackle...

Over the past year, the UN’s limitations in preventing deadly conflict have repeatedly been on display. But the world organisation still has several vital roles...