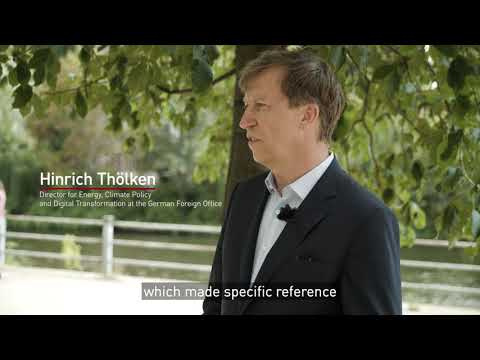 WATCH: Back in 2011, Germany set out a landmark presidential statement to the UN Security Council on climate and security. Ambassador Hinrich Thölken, who was at the helm of this process back then, now takes over as the Director for Energy, Climate Diplomacy and Digital Transformation in the German Federal Foreign Office. This comes up ahead of another milestone moment for climate security: the UN Security Council open debate on 24 July 2020. Janani Vivekananda, Senior Advisor at adelphi, spoke to Ambassador Thölken about it.

Vivekananda:"What do you think has changed since 2011? And what is happening now?"

Thölken:"I think a lot has changed since then. We see that the UN Security Council has been seized a couple of times with the issue of climate change and security. A number of resolutions have been passed. The first one being in 2017 the Resolution on Lake Chad which made specific reference to climate change and security implications. Secondly, the UN has created in the Secretary General's office a climate security mechanism, which is somehow slowly transforming the way UN acts and delivers on the issue of climate change and security; and thirdly, just to give you one example, how much support we find within UN members is that, a group of friends has been formed under German leadership in New York, which comprises now more than 50 UN member states."

Vivekananda:"Can you see any particular ways in which we can learn from public health risk responses and from digitalization to better address the risks presented by climate change and security?"

Vivekananda:"What more do you think needs to be done to address climate change and security risks?"

Thölken: "I would like to see more awareness that climate change is a security issue. Secondly, more people who are well trained and well equipped to perform their duties as diplomats, as UN experts, as representatives in difficult countries that climate change is a political issue. And the third aspect of course would be that we would have to be really earnest and serious in decelerating global warming. Because the best debate about security implications of climate change does not lead us anywhere if we cannot manage global warming itself."

The case of green growth in Ethiopia highlights the complex interactions of climate goals, economic development, and regional geopolitics.

Best of the Berlin Climate and Security Conference 2021

This year’s Berlin Climate and Security Conference (BCSC) focused on inclusive, actionable, and joined-up approaches to addressing climate-related risks to...

Climate resilience and conflict: multi-stakeholder partnerships as a way forward?

In recent years, there has been an outpouring of evidence that climate change is intensifying and driving conflict situations around the world. The socio...

The challenge of securing access to minerals for the green transition

One emerging solution to the climate crisis involves securing investments and prioritizing financial commitments towards clean technologies and shifting towards...

The world waits with bated breath to see if the COP26 will produce the ambitious climate action we desperately need.

This high-level virtual event looked at what key regional and national institutions are already doing to advance a comprehensive approach to security in the...

This high-level session kicked off the Berlin Climate and Security Conference 2021 and set out the need and value of a shared agenda for action to tackle...

Over the past year, the UN’s limitations in preventing deadly conflict have repeatedly been on display. But the world organisation still has several vital roles...