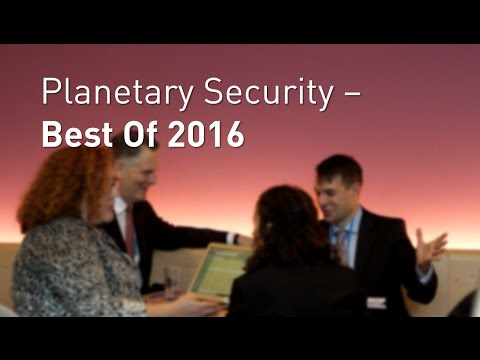 WATCH: This Best Of video features highlights of the Planetary Security Conference 2016, which took place in The Hague from 5-6 December 2016.

Climate change is no longer an 'environmental' issue only but a global security concern that has gained the attention of diplomats, defense communities, development practitioners, and others.

The Planetary Security Initiative, launched by The Netherlands’ Ministry of Foreign Affairs, aims to (1) enhance political awareness of climate-induced risks, (2) involve decision-makers at the climate-security interface, (3) build an inclusive community that is multi-lateral, multi-sector and multi-disciplinary, and (4) create a regular platform for global cooperation on planetary security.

"The last 30 years, we have every decade seen an increase of the average temperature on this planet, so it is happening as we speak.

At the Planetary Security Conference, more than 300 experts and policy makers from over 75 countries gather every year to exchange on strategies for addressing climate risks effectively.
You see the desertification as a result of climate change, resulting in scarcity, therefore conflicts of different groups of people that live there in very difficult circumstances. That often leads to the importation of terrorism of extremist groups who take advantage of this. It is an example of the relationship between security and climate change.

Realities of a warming planet have to be included into all our policy planning.

The role of security and foreign policy is it to make these questions a political priority and to address conflicts before they escalate.

It should be talked about at the UN Security Council; the G7 is talking about it now in terms of climate and state fragility; the G20 needs to talk about, the ASEAN defense ministers need to talk about it. So it is really about uploading climate change to the highest levels of global governance, including in those institutions that think very specifically about security.

The Planetary Security Conference has been a really wonderful opportunity to bring together key stakeholders to really start to discuss how we take forward what is very much a reality for many countries – both developing and developed.

The aim of the initiative is to forge a global community of practice that integrates climate and security and jointly builds resilience.I think that this conference is a recognition that we have to consider this together as a world, we cannot really look at it from national interests or regional interests, it is really about humanity and the future of human civilization.

I think there is more we can do now, taking it to the next stage. Rather than just leaving it has an annual conference I think we need to extend this into the regions on a more frequent basis.

We also have to bring the Green Diplomacy Network and a working group of the G7 to the meeting because this is exactly where a community of practice is built.

It is my belief that we need to be laser-focused on the issue of planetary security."

The production of this video is supported by the German Federal Foreign Office and the Planetary Security Initiative.