Should the UN Security Council take up climate change and if so how? Interview with Prof. Ken Conca 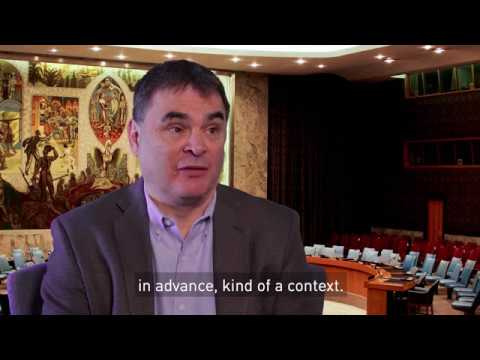 WATCH: The UN Security Council is under increasing pressure to incorporate climate threats under its global security umbrella. Ken Conca, Professor of International Relations at the American University, highlights current barriers for the UNSC to take up the issue and suggests steps to a transformation of the body.

"So there have been several proposals to try to get the Security Council more active and engaged on the question of climate change. One thing our work shows it that there are a few really difficult challenges to doing that more effectively. First, the Council really struggles with information flows. It does not have any independent capacity to generate good analyses and information. The countries on the Council that do have that capacity often don’t share that information and information is shared very poorly with other parts of the United Nations system. For example the humanitarian organs.

Second problem is: the Council is almost inevitably a reactive body. And so much of the climate security agenda is preventive. What we keep hearing when we talk to people in and around the Council is that until crisis hits, until refugees start showing up its very difficult to know what it is that the Council could do. And a third problem is many other countries around the Council are very weary of seeing it intrude upon the responsibilities of other parts of the UN system, the UN Framework Convention on Climate Chance, the activities of some of the specialised agencies. There is lots of suspicion about the Council as being a hierarchical, unrepresentative body.

And there is a strong preference on the part of many countries to move climate conversations into the more legitimate parts of the United Nations. Those that are governed by the climate change convention for example.

One of the things we have tried to do is to propose a set of strategies that rather than asking: What can the Council do on Climate Change? The question we ask is: What are steps the Council can take or can start to transform it into a body that ultimately will be able to be more effective on climate change?

In that regard the proposal by Sweden and others that there be some kind of a focal point on climate security within the United Nation system makes a lot of sense to me. One thing that the focal point could do could be improve some of the problems with regard to information flows.

And the third thing, which I think would be very valuable about having as a focal point, is the opportunity to learn from experience. If you consider something like the Syrian conflict, if you believe there is a climate signature in the Syrian conflict, what would it have taken for the Council to be able to see that in a preventative, in advance, kind of context? It would have required knowledge not simply about rainfall, about drought – but it would have required a completely different level of analysis about the water policies of the Syrian government, the consequences of removing agricultural subsidies.

That is a very different sort of forward looking information than either the kind of crisis analysis the Council currently looks at. The daily horizon scan kind of analysis. Or the long-term scenarios on climate change on a regional scale of the sorts that are produced by the IPCC. It’s regional in scale, it’s medium-term, it’s creating a focal point to bring the different parts of the UN together that can really contribute to that kind of analysis what would ultimately strengthen the Council’s ability to make forward looking and wiser decisions."

The production of this video is supported by the German Federal Foreign Office and the Planetary Security Initiative. The video was directed by Stella Schaller (adelphi) and produced by Paul Müller-Hahl (Lichtbilder).

Why is tackling climate change vital to peace?

Climate change is changing the world we live in. It affects every aspect of life in and represents a central obstacle to peace and to achieving the UN...

WATCH: When it comes to security, the impacts of climate change are particularly harmful. On top of creating unbearable natural conditions in already fragile...