2015 was a historic year for international commitments to sustainable development, climate change action, and new kinds of peacebuilding. For governments and policymakers, now comes the difficult task of living up to those commitments.Security concerns, like ISIS and a revanchist Russia, tend to dominate people’s attention, but less sensational challenges to stability and economic development are piling up as well, threatening to overwhelm humanitarian budgets and prompting governments to shift funding from development to emergency aid. 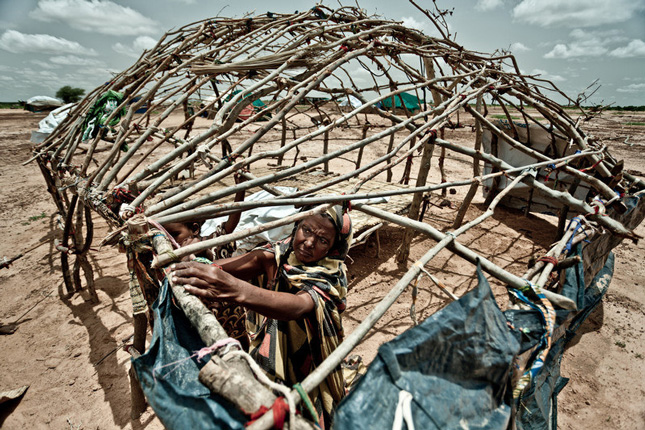 2015 was a historic year for international commitments to sustainable development, climate change action, and new kinds of peacebuilding. For governments and policymakers, now comes the difficult task of living up to those commitments. [Video Below]

Security concerns, like ISIS and a revanchist Russia, tend to dominate people’s attention, but less sensational challenges to stability and economic development are piling up as well, threatening to overwhelm humanitarian budgets and prompting governments to shift funding from development to emergency aid.

It’s important “to reform the system so that the urgent…doesn’t displace the important,” said Nick Mabey, founder and chief executive of the environmental consultancy E3G, at the Wilson Center on May 6. We need to create institutions and processes so that policymakers can “do the medium- to long-term work while the urgent is being managed.”

“There’s no sustainable security without addressing climate and resource issues in future planning,” Mabey said. He pointed to the “1 in 900 year drought” in the Middle East as a background driver of instability, tensions, social unrest, and regional rivalry.

Yet how exactly governments go about addressing climate and resource issues is unclear, despite periodic attention.

The United Nations Security Council held its first-ever debate on the impact of climate change on peace and security in 2007. The United Kingdom, Germany, United States, NATO, and European Union later integrated climate change into their respective security strategies and risk assessment processes, said Mabey – to an extent. “Awareness was there,” he said, “speeches were made, initiatives were launched, strategies were written, but they didn’t actually land in operations.”

At the United Nations, climate change has been a contentious issue in the Security Council for some time, said Ken Conca, author of An Unfinished Foundation: The United Nations and Global Environmental Governance. Some have argued that the Framework Convention on Climate Change should be the primary forum for all climate-related discussions. Others, “with a sense of urgency about climate, trying to do some agenda setting, [and trying] to use the…bully pulpit foundation of the Security Council,” have pushed the Council to consider the security implications themselves, said Conca.

Conca said that the importance of having a “capable and functional Security Council on the issue of climate change and international conflict” is evident. For example, all but one of the UN peacekeeping missions in the field have experienced an extreme weather event or natural disaster. But the Security Council still does not have “the capacity to inform itself in an effective way about the climate change ramifications for its current operations,” he said.

The issue of “environmental refugees” is also shooting up the priority list, said Conca. “When you start having impacts of conflict on civilians and large numbers of people moving, whether it fits the international definition of refugee as somebody who is fleeing for political reasons…or whether it is in the more general category of displaced people who have a very vague status in international law…it is certainly something that garners the Council’s attention.” So far, however, the Council has deferred to the UN High Commission on Refugees on questions of treatment and classification.

Mabey suggested several ways to better integrate environmental factors into foreign policy and security planning at the United Nations. The secretary general has a special envoy on climate change, but he/she must communicate more effectively with the Security Council and the General Assembly, Mabey said. As well, The Framework Convention on Climate Change secretariat needs more capacity for risk assessment, especially for analyzing effects on the international system. Finally, Mabey suggested UN-led pilot projects for at-risk regions, such as North Africa, the Mekong, and East Africa, to build large-scale climate change resilience.

President Obama made climate leadership a “huge initiative” last year and was very successful, “first with China, and then with Paris,” she said. Using this platform, the United States is well positioned to identify integrated solutions that “extend beyond national boundaries” and help combat climate change around the world.

The U.S. military has acknowledged the national security and infrastructure risks posed climate change in strategy documents and directives. The secretary of the Navy has made energy his top priority, subsequently leading to the creation of a carrier strike group, the “Great Green Fleet,” that has been testing more diverse fuel mixes. A recent report by the Department of Defense assesses the impact of sea-level rise on 1,774 military installations for three time horizons: 2035, 2065, and 2100. The report finds that, in the most extreme scenario, Antarctic melt will cause sites in the Pacific Ocean, such as those in Hawaii, to experience sea-level rise at a rate 25 to 30 percent higher than the global average.

People are beginning to realize that the combination of sea-level rise, coastal erosion, and extreme weather events “are a toxic mix” and must be dealt with now, Goodman said.

“What we really need is not to be running these problems through the institutions we have, but challenging these institutions to grow toward where the problem is,” said Conca.

“When countries stand for election in the Security Council, or when countries indicate that they would like to be a permanent member in a reformed Security Council,” Conca said, “they should be challenged to explain what they think the Council’s role is on climate change.” There may not be a right answer at the moment, he said, but governments need to be challenged to start thinking about it.

Mabey said most discussions of climate change and security by governments – at the G7 and G20 summits last year, or the World Conference on Disaster Risk Reduction – have tended toward technocratic solutions. These often neglect social and political complexities, which are important to preventing violent conflict. “Those bits of resilience that require social responses and governance…[seem] to be slightly edited out,” he said.

In post-conflict areas, for example, there is a pattern of financing development initiatives focused on economic growth as a stabilization measure. Mabey said, without the capacity to conduct political and social analyses, these economic growth projects can actually backfire, exacerbating tensions instead of ameliorating them.

Conca agreed that the environmental issues likely to gain the most attention and funding during conflict are related to infrastructure, such as clean water and energy systems, highlighting the traditional notion of development as an engineering challenge.

“We lack the capacity to build a pipeline of really good adaptations,” Mabey said, “especially ones based on soft skills and community management.”

Mabey suggested focusing on improving engagement between development practitioners and diplomats – those with an intimate knowledge of the conflict and political context. Conducting conflict analyses prior to appropriating funding for climate change projects will lead to “the best, most resilient solution, that builds cooperation,” he said.

China as a new climate-responsible donor?

China is rapidly evolving into one of the world’s largest overseas investors and is now increasingly investing in the renewable energy sector. China has also...

A new report released in May by Displacement Solutions and Yangon-based Ecodev urges the government of Myanmar to immediately establish a Myanmar National...

Over the past decade, the number of undernourished people around the world has declined by around 167 million, to just under 800 million people. However, this...

A safe climate future for Bangladesh and the world

Due to its geography, Bangladesh is among the most vulnerable nations in the world. Millions of Bangladeshis are already facing pressing challenges from erratic...

Climate, environment, peace: Priorities for EU external action in the decade ahead

The European Green Deal has made the environment and climate change the focus of EU action. Indeed, climate change impacts are already increasing the pressure...

Climate change is not only one of the greatest global challenges, but also gives the German Federal Foreign Office the opportunity in the area of foreign policy...

Climate change will shift key coordinates of foreign policy in the coming years and decades. Even now, climate policy is more than just environment policy; it...

One of the world’s lowest-lying countries invited international experts to discuss the security challenges related to climate change.