After years of derision under the Trump administration, NATO members were looking forward to the summit on 14 June as a harbinger of closer and more predictable transatlantic collaboration. Among the many issues on the table was the endorsement of a climate security action plan.

Given recent events in Eastern Europe, how to deal with Russia loomed large in the discussions — not least because of the subsequent meeting between presidents Biden and Putin. Particularly for the US, closer coordination within NATO on China was just as big a priority. Whereas NATO governments agree that both China and Russia pose challenges to the Alliance, how to address these challenges proved difficult. While most foreign policy commentators focused on these differences, this may overstate division in strategic outlook when, in fact, much is shared.

The biggest of these shared interests relates to the climate crisis. Climate change was prominent in the bilateral US-UK discussions due to both governments’ investment of political capital into the coming COP in Glasgow. It also informed the G7 summit and the subsequent first EU-US summit since 2014. More surprisingly, perhaps, it featured prominently in the NATO summit on 14 June which, as insiders reported, endorsed a climate security action plan.

Why would NATO devote time to climate security risks? There are essentially three reasons. The first relates to the symbolic significance of affirming that climate change is a threat to international peace and security that is already manifesting in many parts of the world. The Action Plan is hence a welcome sign that NATO members are committed to working together and facilitating multilateral collaboration around a topic that will only grow in importance for the Alliance. 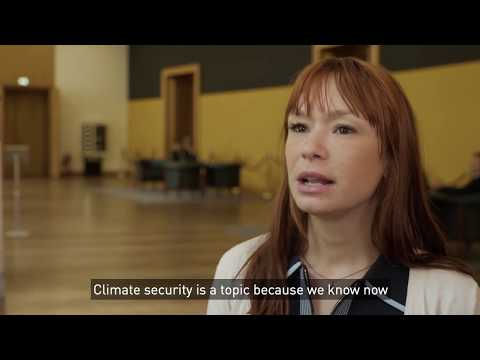 The second reason is more operational. There is a need to anticipate and prepare for the resulting crisis management needs. NATO is currently seeking to cut back on far-flung commitments, as the ongoing, precipitous retreat from Afghanistan attests. Yet whereas the cycle of military interventions ‘out of area’ will follow its sine curve pattern, NATO, or at least many of its members, will not be able to avoid taking on some unwanted responsibilities — witness, for example, France’s so far unsuccessful attempts to shake off the military legacies of Françafrique in the Sahel. Such operations in contexts where climate change is having a complex, often indirect, impact on stability require detailed understanding of the interactions between climatic changes and peace. Otherwise, climate-blind approaches can make matters worse, undermining support for counter-insurgency and driving recruitment to rebel groups.

The third reason is even more practical. Militaries are not just a victim of climate change, as instability generated by a changing climate potentially creates a greater demand for interventions; they are also a significant source of emissions. As part of its forward planning, the defence sector should align its policies and practices with counterparts across government to help ensure compliance with the Paris Agreement commitments, notably keeping global warming below 1.5°C from pre-industrial levels. Disciples of a focus on hard security issues may have shrugged off emission-related concerns in the past, but should consider the links between environmental footprint and force protection. Examining Western experiences in Iraq and Afghanistan, a US Army study found that a significant portion of casualties (some 3,000 people between 2003 and 2007 alone) were killed or wounded transporting fuel or drinking water to the military. A smaller environmental footprint might hence generate significant co-benefits in terms of force protection.

There are thus good reasons for NATO to have considered the consequences of climate change for peace and security at its summit. But what can and should NATO do about it?

The first, and significant, response is what it should not do: it should not militarise climate security. This is a bit of a red herring, as the summit showed that NATO has no intention of militarising the topic. Yet because concerns over militarisation are frequently aired, it bears underlining that the military can only provide a small portion of the response that is necessary for addressing the security implications of climate change because most of the entry points pertain to enhancing human security. At the same time, it is important that militaries are aware that building resilience to climate change is integral to peace and stability in many fragile situations.

The second response involves putting climate security risks at the heart of operations, and integrating climate change into early warning, mediation, peace keeping and peace support efforts that NATO and its members conduct and support. This will help avoid a vicious cycle where climate change leads to more conflict, and the conflicts worsen populations’ vulnerability to the impacts of climate change. Rather than wait until costly crisis interventions seem unavoidable, NATO and its members can and should already begin supporting those states and regions whose stability and peace are most affected by climate-related risks. This means that militaries should work with colleagues in development, diplomacy and climate policy to ensure that all interventions are sensitive to the climate impact and conflict risks in a given context. Initiatives such as Weathering Risk are dedicated to supporting comprehensive, evidence-based solutions that cut across organisational siloes.

In the 21st century, NATO’s responsibilities to the environment go beyond the symbolic significance of affirming that climate change is a threat to international peace and security. We know that the climate crisis is not just an environmental problem, or a challenge for economic development. We also know that the impacts of climate change we have already baked into the Earth system will increase over the coming decades, undermining human security and threatening societal stability and state legitimacy. To avoid costly intervention needs later, NATO and its members should invest in understanding and mitigating these risks now, as an important pillar of its mission of sustaining peace. This strategic collective decision will strengthen the Alliance’s sense of unity and cohesion.