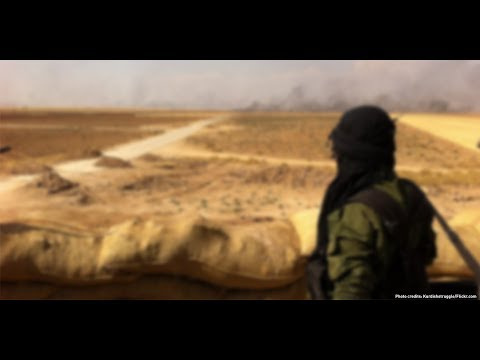 The rise of non-state armed groups and terrorism poses new challenges for national, regional and international security. As the climate is changing, so too are the conditions in which these groups operate.

"Terrorist groups, such as the Islamic State and Boko Haram, have dominated headlines in recent years. Both groups are known for their ruthless brutality. Their rise has posed new challenges for national, regional and international security. As the climate is changing, so too are the conditions in which these groups operate. Climate change increases livelihood insecurity and reduces the ability of governments to respond.

Neil Morisetti (Director of Strategy, UCL Science, Technology, Engineering and Public Policy Department):
The link between climate change and any form of disruption is that if people who have lost their land or livelihood because of the impact of a changing climate in an unstable environment where the government can’t look after their citizens, then they are potentially recruits for organizations such as Boko Haram, IS or Al-Qaeda - or they can become involved in crime. They may not, but it is a potential for this and therefore we need to be aware of it.

Bert Koenders (Minister of Foreign Affairs, Kingdom of the Netherlands):
You see the desertification as a result of climate change, resulting in scarcity, therefore conflicts of different groups of people that live there in very difficult circumstances. That often leads to the importation of terrorism of extremist groups who take advantage of this. It is an example of the relationship between security and climate change. Therefore, those who think still – there are only a few – that they can deny the climate problem and even if they are not interested in it they might be interested in the security and migration part.

A too narrow perspective on non-state armed groups - framing them only in the context of ‘the war on terrorism’ - risks downplaying the complexity of the problem. A broader perspective will help to better address the root causes of the rise and growth of these groups. To discover more about this topic, and find recommendations for policy makers, download adelphi’s report on “Insurgency, Terrorism and Organised Crime in a Warming Climate”.

This Climate Change and Security Impact Assessment (CCSIA) responds to the demand for increased Allied awareness concerning the impact of climate change on...

The nature of conflict and peace: The links between environment, security and peace and their importance for the United Nations

A new report by WWF and adelphi looks at the complex nexus between nature and security. The report outlines four pathways through which environmental...

On 13 May 2022, G7 Foreign Ministers of Canada, France, Germany, Italy, Japan, the United Kingdom, the United States of America, and the High Representative of...

No time for half measures: A security perspective on the new IPCC report on mitigation

If we are to halt global warming and prevent future climate-related security risks, states should embrace the framework of strategies laid out by the IPCC...