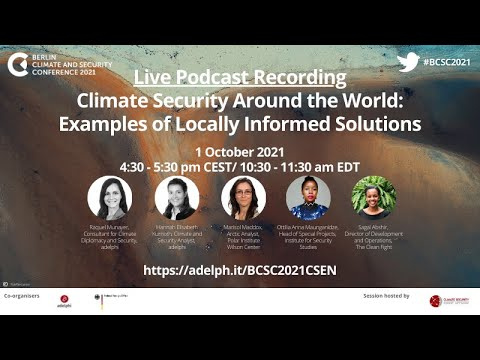 WATCH: Around the world, climate change interacts with social, political, economic, and environmental drivers of conflict and fragility, thereby challenging the stability of states and societies, and undermining international security. This session was the first public live recording of the Climate Diplomacy Podcast.

In the Arctic, climate change is happening three times faster than the global rate. These changes present considerable risks: the region faces several climate change-related “tipping points” as well as geopolitical and militarization threats, all of which have major ramifications both for Indigenous communities and the international community at large.

In the Southern African region, climate change is a central threat to the livelihood, security, and well-being. Food insecurity, forced migration, and stressed resources have emerged as human security issues, while more extreme weather events and increasing temperatures are undermining economic growth, health and productivity, livelihoods and employment, and thus national and regional stability.

Across the Horn of Africa, climate change exacerbates existing pressures, including poverty, food insecurity, and population growth, despite the fact that the countries of the Horn have little to no control over global carbon emissions. Without proper risk mitigation and climate adaptation efforts in these regions, the opportunities will likely be overshadowed by the destabilizing, compounding effects of climate change.

This session, provided by the Climate Security Expert Network (CSEN), focused on climate security around the world and aimed to provide a deep-dive into climate fragility pathways in the Arctic, Southern Africa, and the Horn of Africa, as well as the importance of locally informed solutions to address them.