Skip to main content
Can climate change cause conflict?

Climate change is one of the greatest threats we face. If we do not act now, the results will be catastrophic.

Climate change is particularly risky for fragile countries already beset by conflict. Climate impacts can accelerate political instability, food insecurity, economic weakness, and large-scale movement of people. In the worst cases, climate changes could overwhelm states and societies and push them past the tipping point into a maelstrom of increasing violence, instability, and conflict.

Without effective ways to resolve disputes, competition over increasingly scarce natural resources, such as arable land and water, can lead to instability and even violent conflict.

Climate changes will increase the human insecurity of people who depend on natural resources for their livelihoods, pushing some to migrate or turn to illegal sources of income.

The fertile Fergana Valley, shared by Kyrgyzstan, Tajikistan, and Uzbekistan, is the most populous region in Central Asia. With its complex cultural and religious constellations, it has been beset by inter-ethnic conflict since the disintegration of the Soviet Union. The valley’s artificially drawn political borders, which divide both ethnicities and natural resources, are contested and highly militarized. Cross-border disputes over scarce water and land resources have repeatedly escalated into violent clashes. In recent decades, population, water consumption, and temperatures in the valley have all increased, while average rainfall has decreased, straining both shared resources and diplomatic relations.

In the arid regions of Darfur, deteriorating environmental conditions, combined with a growing population and eroding social and political systems, have increased livelihood insecurity and communal conflicts. Severe droughts in the 1980s led to massive food insecurity and southward migration, with Arab pastoralists from the particularly hard-hit north relocating to southern areas inhabited by farmers. Against a background of discontent and brewing political conflict between the traditional elites in Darfur and the central Sudanese government, these migratory pressures contributed to ethnic polarization and culminated in the 2003 civil war. Adding to the already vicious cycle of overexploited soil, deforestation, wind erosion, and increasingly variable rainfall, Darfur’s local communities suffered the consequences of the violent armed conflict, including huge numbers of internally displaced persons—more than 2 million of which remaining displaced at the end of 2017.

© Sven Torfinn/Panos Pictures
Chad, 2004: Queue of containers next to a water source in the vicinity of the refugee camp of the United Nations Office for Refugees (UNHCR).

Transboundary waters are a frequent source of tension. As demand grows and climate impacts affect water flows, competition over water use can increase the pressure on governance structures designed to manage shared supplies.

In Thailand, 2011’s unprecedented monsoon rains caused massive flooding, affecting two million people across 26 provinces. The response to this disaster was viewed by many as a test of the new government, which was elected after years of political instability. Unfortunately, the government failed to address grievances arising from class discrimination, favouritism, and unequal treatment. Hundreds of civilians took to the streets to protest the distribution of water, electricity, shelter, and food, which was perceived as unfair. In Bangkok, protestors tore down a sandbag wall that protected a wealthy district from water surges. The public unrest and discontent continued until a military coup in 2014.

In the past, India and Pakistan’s cooperation over their shared waters has been crisis-proof. Even during periods of conflict, the treaty and commission that manage the shared waterway continued their work. However, pressures are increasing: climate change is accelerating the melting of the Himalayan glaciers, shifting the traditional patterns of floods and droughts. India’s growing population and water demands upstream put pressure on Pakistan’s water supplies, which support 90 percent of the country’s food production and 65 percent of its employment. These increasing pressures might further aggravate existing political tensions between the two countries and prove to be too much to handle, despite their past record of peaceful cooperation.

Climatic changes, such as drought or flooding, can disrupt food production around the world, increasing prices and market volatility and heightening the risk of protests, rioting, and civil conflict.

Rising sea levels will threaten the viability of low-lying areas even before they are submerged, leading to social disruption, displacement, and migration. At the same time, disagreements over maritime boundaries and ocean resources may increase.

Droughts in grain-exporting countries caused global grain prices to spike rapidly in 2007-2008, food riots broke out in a number of places across the Middle East and North Africa region, where food prices rose by as much as 115 percent. Morocco is dependent on food imports, since its agricultural productivity is hampered by water scarcity due to environmental change and mismanagement. As prices rose sharply in Morocco, citizens protested, starting ‘bread riots’ that were also broadly directed at rising inequality, unemployment, and perceived social injustices. By halting planned cuts in food subsidies, the government was able to buy social peace. But food insecurity, poverty, and lack of economic opportunity remained at critical levels, and protests re-emerged in 2011-12.

Kiribati: Small islands are under threat

Most of Kiribati’s islands are less than three metres above sea level, making it especially vulnerable to long-term sea level rise, coastal degradation, and sudden inundations caused by spring tides, storm surges, and strong winds, causing saltwater to contaminate the islands’ supplies of fresh water. Under pressure to move to the capital island of Tarawa, many people who live on Kiribati’s Outer Islands struggle with the implications for their traditions and ways of life. Tarawa, which is already overcrowded, is likely to attract even more inhabitants. Public services such as drinking water, sanitation, waste management, healthcare, and education are largely deficient and cannot keep up with increasing demands as the population grows, exacerbating poverty, unemployment, and conflicts over land use. In the long term, it may no longer be possible to live on Kiribati’s atolls. To prepare to face this existential threat, the government has begun buying land on Fiji in case it needs to relocate parts of its population. 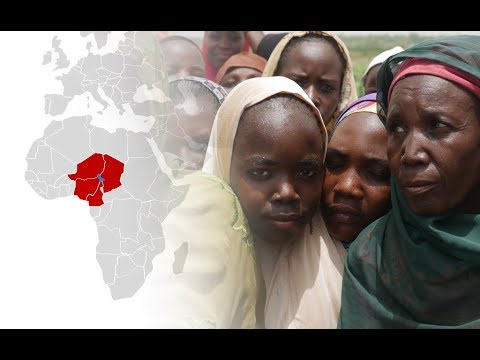 The world’s most extensive humanitarian crisis since 1945 is currently playing out in the four countries that surround Lake Chad: Cameroon, Chad, Niger, and Nigeria. Multiple stressors converge in the region. Unemployment, violent insurgencies, poverty and depleting resources interact with climate change and create a perfect storm of climate-fragility risks. The international community must act, in order to secure lives and livelihoods.

The 10-minute film investigates root causes for widespread misery and conflicts. It features interviews with local experts on Lake Chad, peacebuilders and representatives of international organizations, such as the Security Council and the World Food Programme. To understand the crisis and secure lasting peace in times of climate change, one must shed light on the complexity of the crisis and learn from experiences on the ground.

The interviews were mainly conducted at the Stockholm Forum on Peace and Development, co-hosted by SIPRI and the Swedish Ministry of Foreign Affairs, from 4-5 May 2017.

© Trevor Cole/Unsplash.com
Ethiopia, 2017: Suri tribesmen waiting for a stick fight (donga) to commence in the village of Kibbish in the North Western Omo valley.

The Horn of Africa region makes a negligible contribution to climate change, but it is highly exposed to climate impacts. Drought is the biggest concern in a region where many people remain food insecure — and intermittent floods amplify this threat.

Food insecurity and loss of livelihoods can undermine the legitimacy of state authorities. Unfortunately, those with limited access to food and jobs are more likely to join armed opposition groups. Changing climate patterns can also encourage migration, increasing tensions between farmers and pastoralists over fertile land.

The more we understand climate-security risks, the better we are able to tackle them. That is why Germany is working with the United Nations on a pilot project for a regional assessment of climate-related security risks in the Horn of Africa.

The good news is that we know which solutions can make a real difference. USAID has run programmes in the region which built sustainable livelihoods and reinforced social ties between and within communities. This has helped people to cope better with both conflict and climate-related shocks and stresses.

When different groups worked together to rehabilitate water ponds in the Borana Zone of Ethiopia, they not only increased the water supply for everybody but also stopped thinking of these resources as “contested ponds”.

In short, peacebuilding boosts resilience, and resilient communities are more peaceful. The international community needs to invest into establishing such virtuous cycles.

Sustaining peace in a warming climate 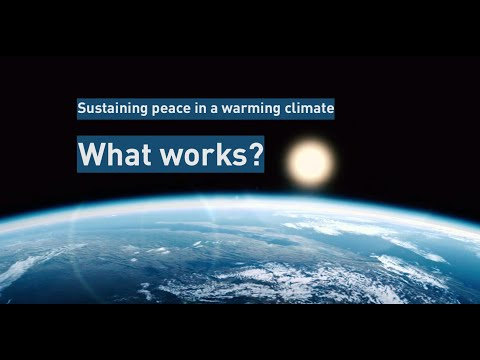 How can peace and security be achieved and sustained in times of a warming climate? Which are core things that development, humanitarian and peacebuilding initiatives must consider and how can solutions be scaled? In brief, what works?

In this video, international experts share insights on what they have learned through fieldwork and research. The connection between climate change and peacebuilding is becoming ever more evident, but conflict dynamics depend on specific regional contexts. Therefore programmes need to address local drivers of conflict and climate change impacts jointly in order to cross sectoral lines and be more holistic.